Ex-CIA analyst Ray McGovern has been crisscrossing the United States, with an occasional detour to Europe, speaking to groups concerned about U.S. foreign policy, but he took time to send in this letter urging readers to help Consortiumnews meet its spring fundraising goal.

When I’m on the road talking with university students, faith groups and just plain Outside-the-Beltway Americans, it strikes me what a unique institution Consortiumnews has become over the past 18 years. It operates inside the Washington Beltway but it has avoided being co-opted by Washington’s facile conventional wisdom.

The Web site has shown me (and not only me) what gutsy professional journalism looks like. To say that Consortiumnews distinguishes itself in comparison to the ever-diminishing “mainstream media” might be construed as damning with faint praise, but what a difference! 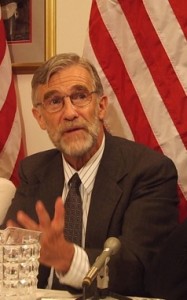 I’ve learned a lot about real aggressive journalism and how its high standards of proof differ even from the “current intelligence” analysis/reporting on which I cut my teeth beginning 50 years ago.

And I don’t just mean the rigors of sourcing and the relentless search for confirmation. I mean the other kinds of stuff Consortiumnews does like your own enterprise in finding explosive material in boxes stacked up in places like an abandoned ladies room off the parking garage of the Rayburn House Office Building.

During my almost three-decade CIA-analyst incarnation it was different. Among other things, I did not have to dig and dig. Copious source material on my area (initially Soviet foreign policy) was dropped into my wooden in-box six or more times a day by a courier from our Operations Center pushing a shopping cart. Except for the required schmoozing with an occasional academic, diplomat or military type, I could have sat quite comfortably on my derriere all day to just read and write.

Your recent reminder of how Washington keeps dissing Russian intelligence when it tries to cooperate with the U.S. was helpful not to mention other recent scoops from more normal (but often neglected) places like the presidential libraries of George H. W. Bush, Ronald Reagan, and Lyndon Johnson.

Those articles have changed how we understand modern history, revealing, for instance, how George H.W. Bush’s White House orchestrated the Iran-Contra cover-up; how Reagan gave a green light to genocide in Guatemala; and how Johnson sat on evidence of Richard Nixon’s Vietnam War “treason.”

On a more personal note, as you know I worked (often at close remove) for George H. W. Bush when he was CIA director, and then briefed him every other morning during his first four years as Vice President. And Bobby Gates worked for me for two years in the early Seventies, when I was chief of the Soviet Foreign Policy Branch. I thought I knew them both well; Gates I saw as corrupt from the get-go (and said so in his “efficiency report”); Bush well I just didn’t know much beneath his respectful mien, his clear interest in our reporting, and his great sense of humor.

What I could never figure out was why Bush expended so much political capital in 1991 twisting senatorial arms to get Gates confirmed as CIA director — despite Gates’s involvement in Iran-Contra. That the reason was because of his deep complicity in Iran-Contra, I’m ashamed to admit, never occurred to me.

Having read your stuff, now I know. Gates knew where most, if not all, of the bodies were buried, so to speak, on Iran-Contra. He also knew how deeply Bush himself was involved. And so, in Bush’s eyes, Gates was desperately needed to fill the optimal position from which to cover it all up. Which he did.

Without Consortiumnews, the American people also wouldn’t know about LBJ’s national security adviser Walt Rostow’s curious instruction “don’t open this envelope for 50 years” to conceal papers showing how Nixon persuaded the South Vietnamese, right before the 1968 election, to spurn peace talks that could have ended the Vietnam War and avoided four more years of bloodshed.

The mainstream news media never wants to explicitly acknowledge these well-documented scoops after all, how embarrassing would that be! but I have noticed that some of these realities still manage to seep into an expanded (and corrected) narrative of American history.

Last week, the “Citizens Response” in Dallas to the George W. Bush “Lie-Bury” asked me to keynote the first speech (by Kathy Kelly) while introducing her via Skype. I shuddered at the thought. Why? Because one thing has become abundantly clear over the last decade; i. e., available time is ALWAYS a problem when one is asked to list the lies of Bush junior and I would have all of 15 minutes.

Your article examining Bush’s long string of bad and dishonest judgments made my task much simpler. I know that many of my friends assembled in Dallas to protest Bush’s celebration regularly read Consortiumnews and the many other Web sites that pick up and re-run our stuff.

So I rested easy in the assumption that many had already read your no-holds-barred commentary: “Let me take a crack at what I would have done if I were in Bush’s shoes or what I think he should have done.” By laying that all out, you spared me from having to devote any of my precious 15 minutes to it.

Consortiumnews is also distinctive, inasmuch as it publishes not only rigorous investigative journalism but also the thoughtful analyses of former intelligence analyst colleagues with whom I was proud to have served — the work of top-tier analysts like Mel Goodman, Paul R. Pillar and Elizabeth Murray as well as the incisive (and often brutally candid) commentaries of religious scholars, like Dan Maguire, Paul Surlis and Howard Bess.

And, though I’ll be writing mostly just speeches over the next few weeks, as I visit other parts of the country “on tour,” I look forward to contributing more of my own articles, too.

Earlier this month, I celebrated the 50th anniversary of my start as a CIA analyst. Out of that perspective, I have to say that at no time have things been so, well, “interesting,” and crucial. Once again our fellow citizens are being misled malnourished as they are on the thin gruel of the Fawning Corporate Media. It is in such times, especially, that I consider it a privilege to write for, as well as learn from, Consortiumnews.

Will the United States stumble into another war (or two) as we approach the 100th anniversary of the start of World War I a war virtually no one wanted? Check out the parallels between today and historian Christopher Clark’s depiction of 1913 in his best-selling book: The Sleepwalkers: How Europe Went to War in 1914.

There are challenging days ahead and a solid foundation of reliable information from Consortiumnews will remain a must.

To help Consortiumnews reach its spring fundraising goal of $25,000, you can donate by credit card online or by mailing a check to Consortium for Independent Journalism (CIJ); 2200 Wilson Blvd., Suite 102-231; Arlington VA 22201. (For readers wanting to use PayPal, you can address contributions to our account, which is named after our e-mail address: “consortnew@aol.com”).

Since we are a 501-c-3 tax-exempt non-profit, your donation may be tax-deductible.

You can also help by buying one of Robert Parry’s books through the Consortiumnews’ Web site  or his latest book, America’s Stolen Narrative, through Amazon.com, either in paper or the e-book version.

3 comments for “Ray McGovern on Consortiumnews”