Just when it seemed the U.S. news media had learned some lessons from earlier “terrorism” misreporting, CNN rushed out and then retracted a report about the arrest of a “dark-skinned” suspect. But a related problem is the compulsion to draw broad conclusions about a rare event, says ex-CIA analyst Paul R. Pillar.

Reactions to the bombs at the Boston Marathon have quickly fallen into a familiar pattern. It is as if there were a manual that politicians, journalists and others involved in the reacting pull off the shelf after any terrorist attack to help them script their comments and their questions.

There are, first of all, ritual denunciations that use a well-worn vocabulary. Every terrorist attack is labeled as “cowardly,” as President Barack Obama labeled this one, even though that is one of the less appropriate of a plethora of negative adjectives that could be applied to terrorist attacks. Different terrorist operations require different degrees of moxie or courage, but with most of them cowardice on the part of the perpetrators is not a dominant characteristic, or even a characteristic at all. 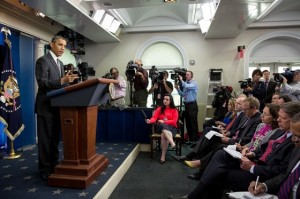 Also in the early hours after a terrorist incident there are aggressive efforts in the media to offer explanations that ought to await a thorough investigation, even though the real investigation is barely getting under way. Of course, journalists gotta do what they gotta do on any story with high public salience.

And there is some informative analysis that is offered despite the paucity of early hard information, especially comments about how, in general, investigations of terrorist incidents tend to proceed. Much of the quickly generated commentary in the media, however, consists of speculation that outruns the available facts. It is over-analysis, which is not helpful to public understanding.

Some of the over-analysis concerns the presumed significance of the particular target. Some perplexity has been expressed about Monday’s attack by those who cannot figure out why the Boston Marathon in particular would be a target of terrorists. Such musing overlooks how many terrorist targets are targets of opportunity, with little if any symbolic significance attached to the chosen target.

For terrorists whose objective is to harm as many people as possible of a particular nationality (which may or may not be true of the perpetrators of the Boston bombing), any well-populated gathering will do.

Similar over-emphasis is placed on the date of an attack and on what it might be the anniversary of. This also overlooks the opportunism involved in most terrorist operations, in terms of when, as well as where, it might be most feasible to mount an attack. In general, western analysts and commentators on terrorism devote more attention to anniversary dates than terrorists do.

The particular method of operation used, including the design of a bomb, is often seized upon in the early hours for much public speculation about who the perpetrators might be. A frequent comment is that such-and-such method of attack or bomb design is a “hallmark” of a particular group. Such observations fail to take account of how one group may copy the methods of another, or of how variation in methods can have advantages for a terrorist group.

There is a strong appetite for inferring patterns. One incident does not make a pattern, but with at least two incidents in close succession the urge to draw patterns is irresistible. The revelation on Tuesday of a letter tainted with ricin poison that was sent to Senator Roger Wicker of Mississippi is sure to stimulate the pattern-drawers, even though senators were told there is no apparent connection between the letter and the bombs in Boston.

Also early in the process there is usually a focus on the domestic political implications of an incident. We have had a bit of that already in connection with this week’s incident, with people taking special note of how the White House pinned the “terrorism” label on the event. The subtext for such observations was the folderol last year over the incident in Benghazi, Libya, in which some people tried to place great importance on whether and when the White House called something “terrorism.”

Expect also that there will be the usual recriminations about how government agencies failed to prevent the attack. We haven’t heard much of that yet, but we will. We can expect that, also as usual, the recriminations will be based on hindsight and will pay little heed to what is or is not realistically preventable.

After a perpetrator is identified, the over-analysis takes a new turn. Major implications are extracted from that identity, even though it may say little about the shape and severity of any underlying threat. Terrorist attacks are rare public events, interrupting extended times without attacks, that are not necessarily representative of any continuing hidden reality.

Imagine that the perpetrator of the bombing on Monday turns out to be a lone individual with personal, nonpolitical and even trivial motivations, such as a runner disgruntled about not getting into the race. The public reaction likely would be one of relief, with the incident then being seen as a one-off involving a bizarrely motivated individual and not indicative of a larger threat. But this development actually would not say anything one way or another about any larger threats that do exist.

The converse of this is represented by the habitual emphasis on whether or not there are “links,” especially to the now-vaguely-defined radical Sunni phenomenon to which we append the label “al-Qaeda.” The tendency is to get alarmed if there is such a “link,” and to be more relaxed if there is not. But actually the presence or absence of such links tells us little about the chance of another bomb going off in an American city next week, next month or next year.

Instead of trying to extract more lessons and implications than are genuinely extractable from a single incident, such an event would be better used as an occasion for thinking about broader issues involving terrorism. To the extent threats from abroad are involved, the thinking should be about how developments overseas and especially U.S. policies abroad may affect the number of those disposed to resort to terrorism.

The thinking also should fit anti-U.S. terrorism into a context in which it can be compared and contrasted with other forms of material harm to U.S. interests and with the physical harm that America’s own actions may cause or exacerbate elsewhere.