As Israel changes “the facts on the ground” through settlement of Palestinian land, the prospects of a two-state solution fade from unlikely to impossible. That has made the Palestinian Authority into a “stooge” organization and helps explain the resignation of Prime Minister Salam Fayyad, says ex-CIA analyst Paul R. Pillar.

Salam Fayyad has been just about everything that U.S. administrations could have hoped for in a Palestinian prime minister. The American-educated economist is competent, honest and moderate. In his six years as prime minister of the Palestinian Authority he made admirable progress in instilling order in the bureaucracy that he led.

It is no surprise that the Obama administration and Secretary of State John Kerry tried hard, ultimately unsuccessfully, to keep him in the job. For similar reasons the Israelis were happy to have him around. 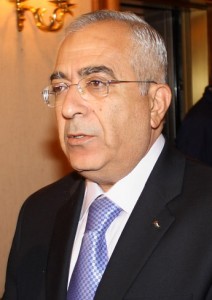 The Palestinian Authority or PA is a strange entity that nonetheless, at the time it was created by the Oslo accords that Yitzhak Rabin and Yasser Arafat signed 20 years ago, made sense. It was to be a transitional mechanism that would facilitate a change of the Palestinian leadership and political structure from a resistance movement (it was as head of the Palestine Liberation Organization that Arafat signed the accords) to a government.

But Rabin, whom an Israeli extremist assassinated in response to his making peace with the PLO, is long gone. For many years now the strange entity has functioned as a stooge of a different sort of Israeli leadership, a leadership whose objective is to delay indefinitely the creation of a Palestinian state and to cling permanently to land conquered through a military invasion 46 years ago.

It is misleading to consider the Palestinian Authority still to be a transitional mechanism as it was originally conceived, given that many years have gone by since, according to the timetable in the Oslo accords, a Palestinian state should already have been established. The PA, regardless of what may have been the skills and good intentions of some of those who have led it, is a Potemkin village, a prop that supports a deceptive Israeli story about peace, land, political power and especially the Israeli government’s intentions.

No matter how much one might understandably consider the Oslo accords to be dead, having the PA still around serves several purposes for Benjamin Netanyahu’s government. Most fundamentally, it preserves the fiction that the Israeli government actually supports a two-state solution.

It also appears to relieve Israel from accountability for failing to live up to its responsibilities under international law as the occupying power in territory conquered in war. Of course, Israel really is the true power over all of the West Bank, but by being able to point to another entity that supposedly has administrative responsibilities it can say that problems and deficiencies are someone else’s fault.

The PA, especially with leaders as respectable as Fayyad, has functioned for Israel as the “good” Palestinians in contrast to the “bad” Palestinians of Hamas, enabling the Israelis to continue to pretend to want to make peace with Palestinians even though it has refused to deal with fairly elected Palestinian leaders when those leaders happen to be from Hamas.

Meanwhile, the purpose of indefinite postponement of a Palestinian state is served by pointing to a Palestinian movement that does not appear to have its act together while Israel simultaneously does everything possible to prevent reconciliation between Hamas and Fatah, the dominant party in the PA, and thus to keep the movement divided.

The Palestinian Authority embodies the concept, articulated by American advocates for the Israeli government such as Elliott Abrams, that Palestinians must “build” a state rather than merely being “granted” one. But the “building” phase continues indefinitely, with an actual state always remaining out of reach.

If the PA seems to be getting too close to statehood, the Israelis can, and do, easily kick it back. After the PA’s move to upgrade its status at the United Nations, Israel punished it by withholding tax revenue that belongs to the Palestinians. This exacerbated a financial crisis that has been one of the biggest challenges for Fayyad’s administration.

The Israelis also, of course, can use their first-choice policy tool, military force, as they did in 2002 when they demolished many of the PA’s offices as well as other administrative infrastructure such as police stations. This action made it all the more difficult for the Palestinians to function in a way that demonstrates they are “building” a state.

Even without Israeli use of something as blatant as the 2002 action, the many everyday restrictions Israel places on transportation and other aspects of Palestinian life make it impossible for the PA to work in a way that would ever force Israel to acknowledge that a state had been “built.”

Palestinian President Mahmoud Abbas has sometimes spoken of abolishing the Palestinian Authority if Netanyahu’s government doesn’t take real steps toward a peace settlement. Abolition would end a charade, but it would also come with a cost to the Palestinians, mostly in the form of handing the Israelis an argument, to be used in perpetuity, that it was the Palestinians who destroyed the Oslo accords and gave up on peace. The charade is also a trap.

One can only imagine Fayyad’s deepest thoughts at the moment. His resignation reportedly involved disagreements with Abbas, as well as significant opposition to Fayyad within Fatah.

But he surely must be feeling some personal relief. He is too smart and too honest not to perceive the stooge-like quality of the enterprise he has been involved in. No one should complain if he were to retire from public life and move into a comfortable academic position somewhere.

4 comments for “The ‘Stooge-Like’ Palestinian Authority”