If journalistic objectivity is applied honestly, it means that all people must have equal standing whether they’re “on our side” or not; outrage over human rights crimes can’t be selective. But Israeli journalist Amira Hass faced fierce attack when she said Palestinians had a right to resist, as Lawrence Davidson notes.

Amira Hass, a reporter for the Israeli newspaper Haaretz who reports on Palestinian affairs in the occupied territories, has come over the years to understand the Palestinians’ plight from their point of view. On April 3, Hass wrote an op-ed for her newspaper entitled “The Inner Syntax of Palestinian Stone-Throwing,” which said:

“It would make sense for Palestinian schools to give classes in resistance: how to build multiple ‘tower and stockade’ villages; . . . how to behave when army troops enter your homes; . . . how to use a video camera to document the violence of the regime’s representatives; . . . how to identify soldiers who have flung you handcuffed to the floor of a jeep, in order to submit a complaint.” 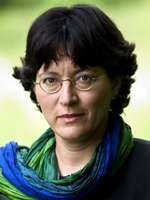 Hass, who has been writing in this fashion since 1991, and Gideon Levy, another Haaretz reporter, are among the very few Israeli journalists who tell the truth about the Israeli occupation. And, as far as I know, they are the only ones who are regularly translated into English.

In this particular op-ed Hass goes on to contextualize the major resistance practice of Palestinian youth, stone throwing:

“Throwing stones is the birthright and duty of anyone subject to foreign rule. Throwing stones is an action as well as a metaphor of resistance. Persecution of stone-throwers, including 8-year-old children, is an inseparable part – though it is not always spelled out – of the job requirements of the foreign ruler, no less than shooting, torture, land theft, restrictions on movement, and the unequal distribution of water sources.

“The violence of 19-year-old soldiers, their 45-year-old commanders, and the bureaucrats, jurists and lawyers is dictated by reality. Their job is to protect the fruits of violence instilled in foreign occupation – resources, profits, power and privileges.”

Finally, Hass asks why such instruction in resistance is absent and answers that it is because the Palestine National Authority has decided to “adapt to the existing situation.” This puts the PNA in a position of fearing truly effective resistance as much as the Israeli occupiers do.

Hass’s truth-telling precipitated a flood of protest among Israeli nationalists and expansionists. The hate mail came pouring in to both Hass and her newspaper, and demands that she be prosecuted for “incitement to violence” were made by rightists and settler groups.

One Israeli, the mother of a child seriously injured in a stone-throwing incident, accused Hass of encouraging Palestinians to use deadly violence in their struggle. “There isn’t a person on earth who will achieve freedom and liberty by means of an instrument of death,” she said.

Unfortunately, this assertion is historically untrue. Indeed, the opposite is the reality. It’s very rare that any group wins its freedom and liberty except through the use of “instruments of death.”

Armed resistance seeking self-determination against “colonial domination and alien occupation and against racist regimes” is recognized as legitimate armed conflicts under the First Additional Protocol to the Geneva Conventions. That Israel, not surprisingly, chose not to be a party to the Protocol is irrelevant.

Perhaps the most interesting objection to Hass’s position came on April 4 from Cellu Rozenberg, a historian and “national security specialist.” It was printed in Haaretz under the title “Amira Hass’ Glass House.”

In this rebuttal, Rozenberg sometimes misrepresents Hass, as when he asserts that “the claim that stone-throwing is the right of every human being . . . is futile and invalid, certainly in ethical terms.” What Hass actually said was “throwing stones is the birthright and duty of anyone subject to foreign rule.”

But, let us set aside this error and concentrate on Rozenberg’s more important assertions, such as his claim that stone-throwing is a potentially lethal activity and is unacceptable when used against civilians.

Rozenberg also said Hass recognizes the legitimacy of this deadly form of resistance in both the occupied territories and inside Israel proper because, she asserts, Palestinians face “institutionalized violence” (albeit in different forms) in both areas. According to Rozenberg, “this is a dangerous crossing of the boundary, because it implies a rejection of the Zionist enterprise.”

Rozenberg said Hass’s argument amounts to an assertion that  “Zionism and the establishment of the State of Israel are a crime against the Palestinians.” That puts Hass’s position in line with the one taken by Hamas.

In all of these assertions, Rozenberg is twisting Hass’s intent. Rozenberg does not acknowledge that Hass calls on the Palestinians to make a distinction between armed and the unarmed occupiers. Hass indicated in her op-ed that there are limitations and “rules” to be learned when practicing resistance “including the failures and narrowness of using weapons.” That certainly puts her in a different place than Hamas.

Nonetheless, Rozenberg reveals a seminal question when it comes to the Palestinian struggle: Is Israel legitimate or is it “a crime”?

If Israel is a criminal venture, then it has no more right to exist than any other criminal organization. However, it is to be noted that Rozenberg, being a good Zionist, conflates two different things: the country of Israel and the Zionist state philosophy and apparatus that runs that country.

Must we see them as the same thing? If it turns out that they can be separated, then can we apply the charge of criminality to one of these and not the other?

Zionists will fiercely insist that the country of Israel was born of the Zionist vision and therefore is inseparable from that ideology. But this is not the way history works. South Africa was born of a European racist vision and for a long time was identified as a manifestation of apartheid. However, that turned out to be an impermanent situation, and since 1994, the country of South Africa has run on a very different model.

The country of Russia was founded as the expression of one ideology in the 15th century, transformed into quite a different state in 1917, and then something else again in 1991. If the history of nation-states proves anything at all, it is that state ideologies are much less permanent than the countries they are initially identified with.

So what are we to say about the country of Israel? A good argument can be made that the country, which is now a recognized member of the modern array of nations, has a right to exist. However, at the same time, it can be asserted that its present racist state apparatuses that practice ethnic cleansing and institutionalized discrimination, as well as the Zionist ideology that justifies such practices, are increasingly unacceptable in the modern world and therefore can claim no inherent right to exist.

The vision of the country of Israel with a different form of government, one that functions to support equally the rights of all of its citizens, is a quite sensible one. It is a goal that is being pursued in many ways (for instance the Boycott, Divestment and Sanctions movement) and, eventually, has a fair chance of success.

And, just so that this writer is clearly understood, this criterion for an acceptable form of government should be a universal one. It makes no difference who the marginalized group is: non-Jews in Israel, Sunnis in Shiite Iran, Shiites in Sunni Saudi Arabia or Bahrain, Tamils in Sri Lanka, Muslims in Myanmar, Native Americans in the U.S., etc., etc. (the list is depressingly long).

All governments should be pressured to reform in the direction of democratic egalitarianism. One might dismiss this as naive idealism, but the South African case suggests otherwise.

And, one might ask, what are the alternatives for those of an activist frame of mind? Are we to retreat into passive acceptance of the world’s criminality? Are we to bury our heads in the sands of localism and quietude? Are we to join the exploiters and oppressors and reap the material benefits of doing so?

There are many choices. Why not follow the example of Amira Hass and choose one that may make the world a better place?

← How the Military Influences the Public
The ‘Stooge-Like’ Palestinian Authority →

7 comments for “A Palestinian Right to Resist?”