Exclusive: Perhaps more than any news organization, the Washington Post steered the United States into the illegal invasion of Iraq. But a Post editorial, which belatedly takes note of the war’s tenth anniversary, admits to no mistakes and acknowledges no lessons learned, reports Robert Parry.

Four days after the Iraq War’s tenth anniversary, the Washington Post published an editorial about the disastrous war of choice, a conflict which the Post’s neocon editors promoted with falsehoods and distortions both before the invasion and for years afterwards.

However, if you thought there would be some admission of the newspaper’s long litany of mistakes or some apology to the war’s critics who were routinely maligned in Post editorials and op-eds, you would be sorely disappointed. There was not even a mention of the nearly 4,500 U.S. soldiers or the hundreds of thousands of Iraqis who died. 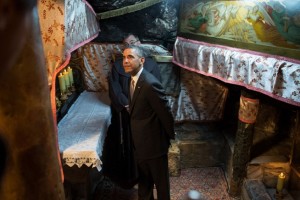 President Barack Obama remains a target of the Washington Post’s outrage over his supposed failure to complete the neocon agenda in the Middle East. Obama is shown here touring the crypt containing the reputed birthplace of Jesus during the President’s visit to the Church of the Nativity in Bethlehem, the West Bank, March 22, 2013. (Official White House Photo by Pete Souza)

After a brief acknowledgement that the war’s tenth anniversary “generated plenty of commentary about the lessons of that war,” the Post’s editors said nothing about what, if anything, they had learned. Instead, they remained in positive spin mode, citing one supposed accomplishment from the invasion.

“For the first time in decades, contemporary Iraq poses no threat to its neighbors,” the Post declared. However, even that is a lie on two fronts.

First, Iraq under Saddam Hussein had not been a threat to its neighbors since the Persian Gulf War of 1990-91, unless the Post’s editors were having a flashback to the glory days of 2002-03 when they were disseminating President George W. Bush’s bogus WMD propaganda. Do they still believe that nonsense?

Second, today’s Iraq under Prime Minister Nouri al-Maliki has become a threat to its neighbors because al-Qaeda-affiliated Sunni extremists from western Iraq have crossed the border to Syria where they have assumed a major role in the violent opposition to President Bashar al-Assad’s regime.

But the Post’s editors want you to believe that the Bush-neocon expedition to Iraq was on the cusp of some great success until President Barack Obama showed up to squander the victory by not insisting on a continuation of the U.S. military occupation of Iraq.

“Iran’s influence over Mr. Maliki’s government is mounting, thanks in part to the Obama administration’s failure to agree with Baghdad on a stay-on force of U.S. troops,” the Post wrote, making it seem as if it were Obama’s petulance that prevented the continued U.S. military presence, not the insistence by Maliki’s government of terms in a “status of forces agreement” unacceptable to the Americans.

In the Post’s frame of reality, however, this failure to keep tens of thousands of U.S. soldiers in Iraq has led to other terrible consequences: “According to U.S. officials, Iraq has been allowing Iran to fly weapons through its airspace to the Syrian regime of Bashar al-Assad. Repeated appeals from Washington to stop the traffic have gone unheeded.”

But an objective observer might have noted that it was the Bush-neocon hubris, rushing into a war to oust Hussein’s Sunni-dominated regime that led inevitably to the expanded influence of Shiite-ruled Iran within the new Shiite-controlled regime in Iraq. Yet, the Post instead placed the blame squarely on Obama.

The Post’s editorial then returned to its current campaign to pressure the Obama administration into entering a new military conflict in Syria, accusing the President of unmanly softness.

“The civil war in Syria, and the passivity with which the Obama administration has responded to it, have reinforced these negative trends. Mr. Maliki fears that the downfall of the Assad regime could lead to a Sunni-dominated government that would back insurrection in Sunni parts of Iraq.

“As with leaders across the Middle East, he perceives that the United States is unwilling to defend its interests in the region, either by stopping the Syrian bloodbath or countering Iran’s interventions. The risk of greater turmoil or even a return to civil war in Iraq is one of several compelling reasons for more aggressive U.S. action to end the war in Syria.”

The Post then summed up its case by suggesting that Obama has betrayed the great victory that the neocons supposedly had won in Iraq.

“President Obama has often given the impression that he has turned his back on Iraq, and many Americans understandably sympathize with him. But a failure to engage with the fragile state U.S. troops left behind would endanger U.S. interests and break faith with the many Americans who made sacrifices there.”

What is particularly startling about the Post’s editorial, which curiously appears four days after the Iraq War’s tenth anniversary, is that the dominant newspaper in the nation’s capital continues to live in a neocon fantasy world or at least refuses to acknowledge key Middle East realities.

In Neocon-land, the big U.S. mistake in Iraq was not forcing the Iraqis to accept an indefinite U.S. military occupation, compounded by the Obama administration’s hesitancy to join Israel in bombing Iran and to jump into another bloody quagmire in Syria in other words to continue the neocon grand plan of “regime change” across the Middle East. [See Consortiumnews.com’s “The Mysterious Why of the Iraq War.”]

Not only did the Post editorial, entitled “Iraq, 10 years later,” offer no self-reflection on the Post’s many factual errors about Iraq’s non-existent WMD, no apology for its bullying of war skeptics, and no recognition of its complicity in a criminal invasion, but the newspaper’s editors appear to have absorbed not a single lesson from what happened a decade ago.

That inability to utter even the most obvious and necessary mea culpa is disturbing in itself. Indeed, if the Post were still a serious news organization committed to the principles of honest journalism, it would have undertaken a major overhaul of its editorial-page staff rather than keeping in place the same leadership and punditry that was so embarrassingly wrong on Iraq.

But, even worse, the Post’s editors continue to pontificate with an arrogance resistant to the undeniable reality of their own misjudgments, incompetence and immorality. In that sense, the Washington Post has become a threat to the Republic and to the world. [For more details, see Consortiumnews.com’s “Why WPost’s Hiatt Should be Fired.”]

7 comments for “The WPost’s Unbridled Arrogance”