In 1961, President Eisenhower warned Americans about the danger of a Military-Industrial Complex diverting public funds into excessive arms manufacturing, but now that influence reaches more broadly into U.S. politics as military contractors flex their muscles on other businesses, as Lawrence S. Wittner describes.

What do hungry children and the world’s largest military contractor have in common? Not much, it seems. At the very time when (thanks to sequestration) state governments are cutting back aid to low-income women and their children, the government of the State of Maryland seems en route to providing the Lockheed Martin Corporation with a handout worth millions of dollars.

This is not just a Maryland issue; Pentagon contractors seek special breaks in virtually every congressional district in the U.S. The details of the Maryland case are illuminating. 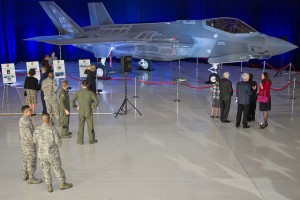 An F-35A aircraft on display at the F-35 Arrival Ceremony at Nellis Air Force Base, Nevada, on March 19, 2013. (Photo credit: Lockheed Martin)

Lockheed Martin, which did $47 billion in business during 2012 mostly weapons sales to the U.S. government owns a very large, luxurious hotel and conference center in Montgomery County, Maryland. In 2010, the corporation succeeded in getting the state to exempt it from paying the state lodging tax that all other Maryland hotels paid.

Then it sought exemption from paying Montgomery County’s 7 percent lodging tax. But the County Council, realizing that this would pull $450,000 per year out of its annual revenues revenues that it used to fund education and other public services refused to give way to corporate pressure.

Indeed, it pointed out that the lodging costs of the company’s employees at the hotel, including taxes, were already subsidized through Lockheed Martin’s contracts with the federal government. The company readily admitted this, but stated: “The fact that some percentage of those costs over time can be reimbursed by the federal government doesn’t reduce the need to lower our overhead costs whenever we can.”

Rebuffed on the local level, Lockheed Martin turned once more to its friends in the state government, championing a bill that would exempt it from Montgomery County taxes and, furthermore, force the county to provide it with a $1.4 million refund for past tax payments.

But this new company demand sparked a lively citizens’ campaign in opposition to what was dubbed the “Corporate Welfare for Lockheed Bill.” Dozens of organizations threw themselves into the battle, including advocacy groups (Common Cause, Fund Our Communities, Progressive Neighbors, Progressive Maryland, and the NAACP),  labor unions (United Food and Commercial Workers, SEIU, and unions representing teachers, police, and fire fighters), and peace groups (Peace Action, Pax Christi, and Maryland United for Peace and Justice).

Articles started to appear in the press. Local politicians began to speak out against the legislation. The County Council again voted its opposition to exempting Lockheed Martin from taxation.

Faced with an upsurge of popular resistance, the State Senate sent the measure back to committee, where it was amended to eliminate the provision for retroactive payment to Lockheed. This action reportedly infuriated a Lockheed lobbyist and represented a small victory for opponents of the legislation.

Nevertheless, a bill providing for the corporation’s future tax exemption went forward, and was passed by the Senate on the night of March 13 by a vote of 37 to 9. The large majority included all but one Republican, as well as a substantial number of Democrats.

A counterpart bill is expected to reach the Ways and Means Committee of the House of Delegates soon. Given the controversy surrounding the measure, its fate remains uncertain. But the corporation seems determined to press forward.

Actually, Lockheed Martin has a long track record when it comes to enriching itself through government support. Its C-130 military transport plane has been a major source of profit for the company. Although, in the late 1970s, the Carter administration concluded that the very costly plane was no longer necessary, Lockheed’s friends in Congress saw to it that the U.S. government purchased 256 of them over the next two decades.

In response to a request from Sen. John McCain, R-Arizona, the Government Accountability Office did a study of how many of these planes the U.S. Air Force had ordered. The answer was:  five. Finding no use for the hundreds of planes, the Air Force simply parked many of them on airport runways, where they gathered dust.

And so it goes. Making vastly expensive weapons systems for the government remains a lucrative business. Lockheed has already forecast a record profit in 2013. A January 2013 article in Bloomberg News reported: “Lockheed’s fortunes depend in large measure on the F-35 jet fighter, its biggest program and the Pentagon’s costliest weapon system, at an estimated development cost of $395.7 billion.”

Of course, Lockheed keeps billions of dollars flowing into its coffers by spending millions every year on lobbying and millions more on campaign contributions. According to Dina Rasor of the Project on Government Oversight, Lockheed is “the ultimate pay-to-play contractor.”

In this context, it’s not surprising that Lockheed has enormous influence in Maryland politics. Over the past year, Lockheed contributed $25,000 to the Maryland Democratic Party, plus thousands of additional dollars to the President of the Maryland Senate, the Senate Democratic Majority Leader, the chair of the Senate Budget and Taxation Committee, another member of that committee, and a member of the House of Delegates. Four of the five became co-sponsors of the Lockheed tax-exemption legislation and all four Senate members voted for it.

This coziness with Lockheed Martin can also become a source of embarrassment now that the issue is hot. A day after the State Senate voted to send the legislation to the House Ways and Means Committee, a private dinner between Lockheed lobbyists and the members of that committee was abruptly canceled.

Of course, it might well be asked why Lockheed Martin bothers with getting itself exempted from Montgomery County taxes. After all, $4.5 million over the next decade is small change to this giant corporation.

One reason might be that most wealthy people genuinely believe that they are entitled to keep every cent of their income. This certainly explains why they resist paying taxes so ferociously.

Another possibility, though, is that Lockheed Martin, like most other military contractors, has grown accustomed to thriving at government expense. Thus, it just can’t resist going back to the public trough for a little more corporate welfare.

Lawrence S. Wittner is professor of history emeritus at SUNY/Albany and is syndicated by PeaceVoice. His latest book is Working for Peace and Justice: Memoirs of an Activist Intellectual (University of Tennessee Press).

7 comments for “The Greed of Lockheed Martin”