Watching President Obama’s three-day love-fest toward Israel left critics and even some supporters cringing at his excessive embrace of Prime Minister Bibi Netanyahu and everything Israel has ever done. But Obama’s “game-change” metaphor on Syria may be the most troubling, says ex-CIA analyst Paul R. Pillar.

President Barack Obama’s visit to Israel has shaped up the way the White House probably hoped and expected it to, which is to say without surprises or major hiccups and with pre-programmed messages coming through strongly.

There have been three such messages in particular. One is that despite previous frictions, relations between the President and his friend Bibi are peachy. Conveying the image of peachiness has required the President to exude in tandem with the prime minister what has been Netanyahu’s number one preferred message, which is that Iran is a horrible threat. 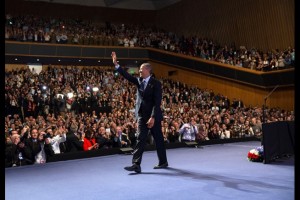 Thanks to persistent questioning by reporters at a joint press conference, however, Netanyahu did seem to accept the idea that an Iranian nuclear weapon isn’t something that anyone is going to see for at least the next year.

Another White House message was about how, despite general Israeli wariness and distrust of Obama, he really has great sympathy and empathy for the Israeli people. The first half of the president’s biggest speech of the visit, delivered in Jerusalem on Thursday, was a tour de force of such empathy and sympathy. The only conceivable reason any Israeli might wince is over how thickly the President’s speechwriters were laying it on.

The third message began abruptly about mid-way in that same speech. It concerned the need for Israel to make peace with the Palestinians, and the President’s belief that such an agreement is still feasible. That half of the speech was an eloquent explanation of why reaching such a peace agreement is very much in the interests of the Israeli people.

But beyond a gentle observation about how citizens sometimes have to push their politicians into action, Obama has said or done nothing else on this trip to help make an Israeli-Palestinian peace a reality. In particular, he has not gone beyond the usual feeble references to “unhelpfulness” in addressing the continuing Israeli colonization program that is making a two-state solution to the conflict less feasible with each passing year. So we can only hope and wait for some kind of follow-up action.

While hoping and waiting, we might take note of something else the President said in his appearance with Netanyahu, concerning the more immediate situation of Syria. Amid unconfirmed reports of use by the regime of chemical weapons, Obama remarked that any such use would be a “game changer.”

This evidently was not just an off-the-cuff comment; he said something similar in the Jerusalem speech. We should ask: exactly why would use of a particular category of weapons in the ongoing Syrian civil war be considered a “game changer”?

One of the real answers is that this is another manifestation of the public fascination with any kind of unconventional weapons. The fascination (and fear) has extended indiscriminately to all parts of the CBRN quartet that also has included biological, radiological and nuclear devices. The fascination repeatedly comes up in discussions of terrorism, in a way that has consistently outpaced what terrorists actually have been doing. And of course it was a centerpiece of the selling of the expedition whose ten-year anniversary we have been observing (or lamenting) this week.

Just as it was ten years ago, chemical weapons routinely get termed a “weapon of mass destruction.” But they are not really that, in the way that nuclear or biological weapons could be. Rather exacting, and not very common, conditions regarding the physical environment and the deployment of opposing forces have to be met for chemicals to inflict what could be considered mass casualties.

To be sure, chemical weapons can have very nasty effects, and it was that nastiness relative to their military utility that led to their use being legally banned through international agreement. But conventional means can be used to produce nasty and even hideous effects, too.

That’s true of the Syrian civil war. If one wants to indict the Syrian regime for inflicting much physical suffering on its people, one does not have to look for a deployment of chemical weapons. One doesn’t even have to look at the current civil war.

When Bashar Assad’s father was still in charge, for example, the regime carried out a massacre in Hama in 1982 in which the total casualties will never be known with accuracy but have produced estimates of 10,000-40,000 killed. No chemical weapons appear to have been used in that operation, but other tactics with effects just as grisly reportedly were, such as pouring fuel into underground tunnels and then igniting it to incinerate members of the resistance hiding there.

Another reason for some to seize on the possible use by the regime of chemical weapons is to use it as a hook for arguing anew for the United States to get involved more heavily in the Syrian civil war. So once again, as was the case ten years ago, a factual question with a presumed yes-or-no answer about a regime’s use or possession of a certain category of weapons gets treated as if the answer dictates a certain policy course, even though it doesn’t.

Speaking of that bad experience a decade ago, here’s one more way to think about the significance of chemical weapons. Suppose, as a counterfactual, that U.S. troops invading Iraq had come upon large stockpiles of chemical weapons. How would history have been different? The Bush administration, of course, would have been able to say: Yes, Iraqi WMD do exist! And much of the later commentary and criticism about the war would have had to take a different form from what it did.

The war still would have been a big blunder. And the chemical weapons would not have changed any games.

← The Cusp of Ecological Disaster
The Greed of Lockheed Martin →