In a world where all emotion is translated into a sales pitch and each thought becomes a talking point, the existential question is how to live a life that embraces real emotion and articulates original thinking, a dilemma that poet Phil Rockstroh addresses in this commentary on late-stage capitalism.

As a general rule, musicians, artists, and writers, as well as those possessed of an ardor for self-awareness and a commitment to political activism have been advised to avoid a habitual retreat to comfort zones to take note of the criteria that causes one’s pulse to quicken, brings flop sweat to the brow, causes sphincters to seize up, and delivers mortification to the mind.

In order to quicken imagination and avoid banality, it is imperative to explore the fears that cause one to awaken in the darkest of night to stare bug-eyed at the ceiling until dawn; to embrace discomfort; to shun crackpot complacency; to wander through the teeming polis of the psyche, and, in so doing, to not only stray and mingle among the outcasts, demimonde and mad, but proceed to the locked-down wards of the region’s lunatic asylum, and make an exhausting inquest into the nature of the hopeless cases that have been hidden from public view. 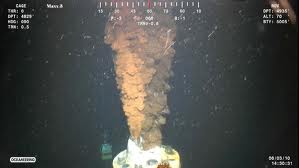 As of late, my darkest thoughts and angst-engendered imaginings have involved the following: The ecological debasement of the earth, the ongoing degradation of daily life within U.S. society, and the attenuated destiny of the individual under the yoke of late-stage, global capitalism.

My ruminations have been, in large measure, engendered and inflamed by the following: On Tuesday, Feb. 26, of this year, a son was born to my wife, Angela and myself.

August Franklin Rockstroh came into this world at a time when the planet he will inhabit is warmer than it has been in 11,000 years, a condition caused by the industrial production of man-made greenhouse gasses.

He arrives into an age wherein it is imperative that we as a species re-imagine nearly all we know. Thus far, from the halls of power to the floors of minimarts, our avidity for avoidance of the realities at hand does not augur well for humankind’s chances.

Two weeks before the Deepwater Horizon, Macondo Well “spill” (what a dishonest word for that noxious, bleeding gash) into the waters of the Gulf of Mexico, I dreamed of a badly injured fish who had had half his face torn off by some brutal method employed by the practitioners of industrial scale fishing operations to exploit the world’s oceans The fish had worked himself upon a rock on a craggy shoreline. Holding an eternity of suffering in his remaining eye, the fish turned to face me Ever since, this dream image has lived within me.

I carry the fish’s suffering and I bear his dark rage regarding what our species has done to his/our home — this complex, mysterious, beguiling, dangerous, sublime, monstrous, and magnificent world we were cast into … My sense of sorrow, at times, seems unbearable; my rage bottomless … Who will speak for the voiceless — who will make amends for their suffering?

This much is clear: The means that sustain the present economic order not only defies moral justification (i.e., a culture dependent on the enforced misery of the multitudes and the wanton exploitation of nature) but the order has proven anathema to the balance of the earth’s life-enabling forces — a balance of forces mandatory to the continuance of the human species on the planet. The fate of the earth is inexorably linked to our personal destiny.

Deep down we know this to be true, but the atomizing nature of late capitalism inflicts learned helplessness. Social and political change seems impossible. Personal transformation is relegated to the realm of New Age snake oil. Human longing is deracinated. The Tree of Knowledge rendered a Chia Pet. The unruly call of destiny is bowdlerized into sterile careerism.

Yet, my newly arrived son, as we all do, will long to embrace his own authentic destiny.

The alienation at the mechanized heart of the corporate/consumer state’s structure will present a daunting challenge to him, for it is difficult to live a life imbued with depth and resonance without meaningful human engagement.

Abiding bonds that bring the depth of oneself deep into life must be formed. A social milieu must be in place that allows for love and friendship, for coming upon mentors, for grappling with antagonists, whereby one is destroyed by catastrophic victories and enlarged by propitious failures.

Although every individual arrives at a fate uniquely his/her own, soul-making is a collaborative effort. Destiny only appears to be a solo act.

My character, like yours, is a composite of all the events, happenstance, and circumstances that transpired before, and after, I arrived in this world. It is resultant from the accumulation of my choices — and the choices of those in positions of power and authority, over which, I am, all too often, powerless. But if you discern what I yearn for, you will know who I am.

One’s destiny awaits just over the crest of the horizon. It is glimpsed in sublime snatches like a beautiful stranger who catches your gaze from a passing train. Yes, it sleeps within, but must be roused into being by interaction with the outer world. It awaits you in the vastness of life. The truth of your being is honeycombed into life’s intricacies. As a general rule (Emily Dickinson accepted) one’s destiny does not make house calls.

If character is destiny, the soul of the world is the catalyzing agent that conjures manifestation. While, to some degree, all who live are imprisoned by the past, it is best to be aware of what criteria brought about your incarceration to habit and circumstance.

It is essential to become aware of the contours of your cage to be in possession of a blueprint of the prison. In this way, your odds of escape are greatly enhanced.

Are you weighted down by feelings of powerlessness nettled by feelings of helpless rage? Good. Your feelings are appropriate to the tone and tenor of the times.

Use the feeling of being weighted down to your advantage: Descend deep into the deepest recesses of your being and listen to the garrulous silence therein. Appropriate your blessed rage as well: What admonitions cry out from the heart of light ensconced within your darker places.

What is it that is essential about your deepest nature that needs to find its way into Animus Mundi — the soul of the world must seek out collaboration with even the most mundane moments of the breath of day. This is how the creative spirit flourishes, how every moment is made holy.

And remember: Your life is a question that you live your way into. Any attempt to coerce an answer amounts to vivisection, not art. Conversely, and anathema to the process, the guiding principle of the neoliberal economic order reduces the things of the world to mere economic entities.

At this point, this much is, or, at least, should be grimly obvious: Existence within a system that defines all things by their ability to enrich the fortunes of a predatory class of elites starves the soul and blights the landscape; it has come to exist as a thief, defiler, and squanderer.

Exploited and demeaned, the populace grows callow and empty. Desperate to sate the hollowing emptiness within, the citizens of the corporate/consumer state have internalized the noxious mythos of endless growth, peddled by their exploiters, and have been driven to devour their seed crop.

In doing so, all concerned will condemn their society to the landfill of history. Yet, even in this age of corporate despotism, political duopoly, communal atomization, ecocide and the attendant alienation and ennui, life can be lived with passion and grace, and, as individuals, we can take measures to promote a transformation of the prevailing order.

There are simply too many hidden variables involved to predict and control the future. Consequently, this is what we can do: resist the present, corrupt order; organize to bring it down; and strive to create more viable alternatives. All of which exist within the spectrum of the doable.

At the end of the day, it is a far better choice to err on the side of your inner calling, than to languish as a simulacrum of yourself evincing a counterfeit consciousness that demands you spend your days compliant to the demeaning dictates of a ruthless few.

As a general rule, one stands powerless before the sweep of history and the caprice of the ruling elite. Regardless, you must choose to slouch in the direction of your destiny, or else your life will consist of a litany of thwarted longings — an agonizing death within life that is absent death’s release and resists the warmth and proffered consolation borne of the living.

All the world may be a stage, but don’t allow yourself to be miscast as an expendable, one dimensional character, conceived by miserable hacks. Deep down, your life’s calling is encoded within you. Throughout your lifetime, it will arise as inchoate yearnings, reveal itself as implausible daydreams, or as dream-borne symbols that seem, in regard to your daytime exigencies, abstruse or useless.

You may know it as a hollow ache in your chest. Or a nettling voice, in the recesses of your awareness, that asks, “how did it come to this?”

Ignore destiny’s entreaties at your own risk. Although, your soul will stay at you; it will implore you to pay attention even if it must pummel you with nightmares or conjure a state of depression that brings on a darkness at noon.

“We are all subject to the fates. But we must act as if we are not, or die of despair.” — Philip Pullman

To paraphrase Rilke, if you ignore the beckoning call of your own uniqueness, your soul will serenely distain to annihilate the false notions that propel you through the harried hours of meaning-denuded day. When shunted aside or blocked by barriers of calcified habit, the soul’s inexorable agency will be experienced as a kindly cataclysm. At times, becoming ensnared in the dark night of the soul will allow a lodestar to reveal itself.

Withal, on a cultural basis, the nature-decimating, soul-shredding agendas of the neoliberal enterprise are propelling us collectively towards economic and ecological cataclysm.

When questioned by the youth of future generations, those born into the world created by our myopic choices, about how you responded when the earth was burning, will you reply that you went to the mall, sat in public places staring at a glowing electronic box, engaged in cretinous palaver about the private lives of sub-cretinous celebrities and the dim machinations of reality show jerk-rockets?

At this critical juncture, one’s individual calling will be interwoven with the fate of the earth and the collective destiny of all of humankind. The age of elitist narcissists is drawing to a close. The time for dreamers, visionaries and activists has arrived, and their time of arrival is long past due.

“The world is full of magic things,

for our senses to grow sharper.” — W.B. Yeats

“Sometimes you have to play a long time to be able to play like yourself.” — Miles Davis

Phil Rockstroh is a poet, lyricist and philosopher bard living in New York City. He may be contacted at: phil@philrockstroh.com/ And at FaceBook: http://www.facebook.com/phil.rockstroh