Exclusive: Behind today’s fight over government spending is a bigger struggle for U.S.  democracy’s future, pitting the traditional white-ruled country against a new multicultural nation, or the Right’s Real America against Other America. To win, Real America must make Other America fail, says Robert Parry.

You might have thought that Election 2012, in which Barack Obama thumped Mitt Romney and Democrats bested Republicans in total votes for Congress, provided a popular mandate for more government investments in national infrastructure, cutting-edge research and public education paid for with slightly higher taxes on the rich  and less interest in austerity that will cost jobs. But, if you thought so, you were wrong.

From the point of view of the Right or what some like to call the Real Americans there is no reason to respect last November’s electoral judgment because it was delivered by the Other Americans, who are seen as essentially an enemy country that just happens to be located inside the territorial United States. And that enemy country must not only be defeated, but must be made into an example of what happens to those who challenge Real America. 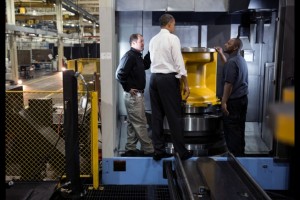 What President Obama and many Democrats have yet to realize is that they are not just in a political fight or even an ideological battle. They are in a zero-sum war over whether Real America will govern this land or whether political control will be ceded to Other America.

Similar struggles were waged when European whites wrested the land from Native Americans in colonial and post-colonial times and when Southern whites reclaimed control of the former Confederacy from freed African-American slaves after Reconstruction. Now, with Republicans losing the demographic competition having alienated blacks, Hispanics, Asian-Americans and young urban whites the Right must resort to anti-democratic and other under-handed tactics to win.

In doing so, the Right also is drawing on the history of the Cold War when it was common U.S. government practice to wreck the economies of Third World governments that were viewed as flirting with “socialism.” There were two goals: to oust their wayward leaders (replacing them with more compliant figures) and to make the devastated countries examples for others.

Thus, you had CIA covert operations staging coups in Iran in 1953 (because Prime Minister Mohammad Mossadegh was nationalizing foreign-owned oil wells); in Guatemala in 1954 (because President Jacobo Arbenz was pushing land reform); and in Chile in 1973 (because President Salvador Allende was trying to reduce income inequality).

In Nicaragua in the 1980s, a leftist Sandinista government opened health clinics and launched literacy programs, making it the ideological enemy of President Ronald Reagan who waged a ruthless campaign to reduce Nicaragua’s economy to rubble, to terrorize the population, and to set the stage for the election of a pro-U.S. politician.

While getting rid of troublemakers in these and other cases was part of Washington’s agenda, perhaps more important was the demonstration to nearby countries about what would befall them if they deviated from the model of unregulated or lightly regulated capitalism, i.e., if they challenged the economic status quo in which privileged elites collaborated with multinational corporations.

Thus, you had National Security Advisor Henry Kissinger’s famous quip about the strategic insignificance of Chile as “a dagger pointed at the heart of Antarctica.” In other words, the U.S. government knew that Chile itself was unimportant to the Cold War chessboard but still was determined to stop Chile from becoming a successful model for other Latin American countries. President Richard Nixon’s stated goal regarding Chile was “to make the economy scream.”

This history is relevant today because the United States is seeing something comparable occurring not in some faraway land but at home. Well-funded elements of the American Right are determined to do to the country that elected Obama twice what the CIA did to places like Iran, Guatemala, Chile and Nicaragua, i.e., whatever is necessary to wreck the economy and to create angry political divisions.

These right-wingers also don’t see what they’re doing as treasonous, which could be defined as willfully acting to damage or destroy your own country. The reason is that they no longer consider the America that elected Obama to be their country. They see it as a foreign entity increasingly controlled politically by brown-skinned minorities, feminists, gays, and young whites who are comfortable in a multicultural world.

In the Right’s opinion, America should be ruled by whites, albeit with the help of a few token blacks and Hispanics; that’s the proper order of things. It’s what Alaska Gov. Sarah Palin and other right-wingers have called the “Real America”; it’s what they mean when they talk about “taking our country back.”

The “Other America” is not just seen as a political rival with some different ideas but as an alien being that has come to inhabit the body of the United States. It is a rampaging virus, a metastasizing cancer. It must be eradicated or at least brought under control and managed.

So, if you must suppress the votes of “those people” by imposing new “ballot security” measures or by rigging control of Congress through extreme gerrymandering of districts (and thus devaluing the votes of blacks, Hispanics and young city dwellers), then that’s okay.

Some Republican-controlled states that tend to vote Democratic in national elections are now trying to apportion presidential electors from those deformed congressional districts, rather than from the state as a whole, in order to make the votes of rural whites more powerful than the votes of minorities and urban residents. [See Consortiumnews.com’s “Return of Three-Fifths of a Person.”]

Or, if you must whip up some crazy dreams of armed insurrection against the U.S. government by distorting the original intent of the Second Amendment and allowing weapons of war into the hands of unstable people that serves the purpose of putting everyone on edge and creating useful insecurity. [See Consortiumnews.com’s “The Right’s Second Amendment Lies.”]

Similarly, some right-wing public officials, including Texas Gov. Rick Perry, offer loose talk about “secession” in which the states of Real America would secede from the Union of the Other America, much as the Confederate states seceded in the early 1860s to protect the institution of slavery.

And, if you must disrupt the economy of the Obama-controlled Other America by threatening to make the United States default on its debts, that has benefits, too. Certainly, before Election 2012, such disruptions helped keep unemployment high and boosted Mitt Romney’s electoral chances.

But even after the election, there remains a necessity to beat down the U.S. economy, to make it “scream,” whether by implementing major spending cuts as in the current “sequester” or by forcing periodic crises in the functioning of government like standoffs over government shut-downs and debt defaults.

Certainly, there is no interest in supporting public spending on infrastructure, research or education, which might only put people back to work or make the government look useful. Today’s Right doesn’t care that the predictable results of austerity as Europe has shown is a likely double-dip recession and more pain, indeed that appears to be the plan.

After more years of high unemployment and decaying services, the Right can then pound away at the talking point that Obama’s modest policy reforms, including slight increases in tax rates on the rich, failed. The political space might be created for restoring full right-wing control of Congress in 2014 and over the entire federal government in 2016.

Then, more permanent alterations in democracy can be installed to give substantially more weight to the votes of Real Americans while ensuring that Other Americans never get their hands on real power.

Perhaps President Obama’s biggest miscalculation has been his lack of appreciation for how radical the Right and its chief political vehicle, the Republican Party, have become. In 2009, he assumed that the depth of the financial crisis would force greater cooperation with his proposals for saving the auto industry, stimulating the economy and achieving some reform of health care. Instead he faced near unanimous GOP opposition.

With his “base” demoralized in 2010, Obama saw the Republican Party and its Tea Party faction make major gains in Congress, seizing control of the House and growing even more emboldened about using the filibuster to tie up the Senate. GOP governors and statehouses also moved to reshape congressional districts to enhance Republican power.

In 2011, to stop the GOP from forcing a default on the U.S. debt and throwing the world’s economy into crisis Obama agreed to an unpalatable across-the-board cut in future spending, called “the sequester.” By doing so, Obama at least kept the U.S. economy on a slight growth path through Election 2012.

Though Obama won reelection decisively and Democrats outpolled Republicans in congressional races, the Republicans retained control of the House largely due to the aggressive gerrymandering of districts. Combined with the Senate filibuster, the House majority has given the GOP effective veto power over Obama’s agenda.

Heading into his second term, Obama is surely less starry-eyed than he was in 2009, but he continues to underestimate what is confronting him from the more extreme elements of the Republican Party the neo-Confederates, the Tea Partiers, the Ayn Rand acolytes and the Christian fundamentalists. These groups are not at all interested in making things work in the Other America; they want pretty much everything to fail.

These extremists financed by the likes of the Koch Brothers and other anti-government ideologues view Other America as an enemy state that must be hobbled, put back in its place and forced to let Real America reassert control. If that can be achieved in 2014 and 2016, Real America would then move with more determination to reshape the electoral system to give even greater weight to its votes and less value to the votes of Other America.

To hold back the demographic shift toward a “multicultural America,” “traditional America” must impose a form of American apartheid, that is, legal arrangements to ensure future white control even though non-whites and urban youth might make up the majority. In effect, they would be given some lesser status as citizens. Their votes might count as, say, three-fifths of a person.

That is the project that the Republican Party began in earnest in 2011 with laws to restrict voting times, to impose new obstacles for casting ballots, and to reshape districts to maximize the electoral clout of rural whites (while minimizing the influence of urban non-whites and other city dwellers).

Now, the next phase of this war is playing out in the right-wing obstructionism toward virtually every economic policy proposed by President Obama. It is very important to the Right’s strategy that the U.S. economy be made to “scream.”

[For a limited time, you can purchase Robert Parry’s trilogy on the Bush family, which includes detailed accounts of these false narratives, for only $34. For details, click here.]

← Cracks in Sanctions on Iran
The Ever-Spinning Revolving Door →

4 comments for “Making ‘Other America’ Fail”