Exclusive: A big obstacle to commonsense gun control is the Right’s false historical narrative that the Founders wanted an armed American public that could fight its own government. The truth is that George Washington looked to citizens militias to put down revolts and maintain order, says Robert Parry.

Right-wing resistance to meaningful gun control is driven, in part, by a false notion that America’s Founders adopted the Second Amendment because they wanted an armed population that could battle the U.S. government. The opposite is the truth, but many Americans seem to have embraced this absurd, anti-historical narrative.

The reality was that the Framers wrote the Constitution and added the Second Amendment with the goal of creating a strong central government with a citizens-based military force capable of putting down insurrections, not to enable or encourage uprisings. The key Framers, after all, were mostly men of means with a huge stake in an orderly society, the likes of George Washington and James Madison. 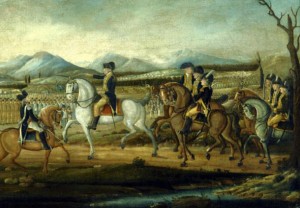 President George Washington, as Commander-in-Chief, leading a combined force of state militias against the Whiskey Rebellion in 1794.

The men who gathered in Philadelphia in 1787 weren’t precursors to France’s Robespierre or Russia’s Leon Trotsky, believers in perpetual revolutions. In fact, their work on the Constitution was influenced by the experience of Shays’ Rebellion in western Massachusetts in 1786, a populist uprising that the weak federal government, under the Articles of Confederation, lacked an army to defeat.

Daniel Shays, the leader of the revolt, was a former Continental Army captain who joined with other veterans and farmers to take up arms against the government for failing to address their economic grievances.

The rebellion alarmed retired Gen. George Washington who received reports on the developments from old Revolutionary War associates in Massachusetts, such as Gen. Henry Knox and Gen. Benjamin Lincoln. Washington was particularly concerned that the disorder might serve the interests of the British, who had only recently accepted the existence of the United States.

On Oct. 22, 1786, in a letter seeking more information from a friend in Connecticut, Washington wrote: “I am mortified beyond expression that in the moment of our acknowledged independence we should by our conduct verify the predictions of our transatlantic foe, and render ourselves ridiculous and contemptible in the eyes of all Europe.”

In another letter on Nov. 7, 1786, Washington questioned Gen. Lincoln about the spreading unrest. “What is the cause of all these commotions? When and how will they end?” Lincoln responded: “Many of them appear to be absolutely so [mad] if an attempt to annihilate our present constitution and dissolve the present government can be considered as evidence of insanity.”

However, the U.S. government lacked the means to restore order, so wealthy Bostonians financed their own force under Gen. Lincoln to crush the uprising in February 1787. Afterwards, Washington expressed satisfaction at the outcome but remained concerned the rebellion might be a sign that European predictions about American chaos were coming true.

“If three years ago [at the end of the American Revolution] any person had told me that at this day, I should see such a formidable rebellion against the laws & constitutions of our own making as now appears I should have thought him a bedlamite – a fit subject for a mad house,” Washington wrote to Knox on Feb. 3, 1787, adding that if the government “shrinks, or is unable to enforce its laws anarchy & confusion must prevail.”

Washington’s alarm about Shays’ Rebellion was a key factor in his decision to take part in and preside over the Constitutional Convention, which was supposed to offer revisions to the Articles of Confederation but instead threw out the old structure entirely and replaced it with the U.S. Constitution, which shifted national sovereignty from the 13 states to “We the People” and dramatically enhanced the power of the central government.

A central point of the Constitution was to create a peaceful means for the United States to implement policies favored by the people but within a structure of checks and balances to prevent radical changes deemed too disruptive to the established society. For instance, the two-year terms of the House of Representatives were meant to reflect the popular will but the six-year terms of the Senate were designed to temper the passions of the moment.

Within this framework of a democratic Republic, the Framers criminalized taking up arms against the government. Article IV, Section 4 committed the federal government to protect each state from not only invasion but “domestic Violence,” and treason is one of the few crimes defined in the Constitution as “levying war against” the United States as well as giving “Aid and Comfort” to the enemy (Article III, Section 3).

But it was the Constitution’s drastic expansion of federal power that prompted strong opposition from some Revolutionary War figures, such as Virginia’s Patrick Henry who denounced the Constitution and rallied a movement known as the Anti-Federalists. Prospects for the Constitution’s ratification were in such doubt that its principal architect James Madison joined in a sales campaign known as the Federalist Papers in which he tried to play down how radical his changes actually were.

To win over other skeptics, Madison agreed to support a Bill of Rights, which would be proposed as the first ten amendments to the Constitution. Madison’s political maneuvering succeeded as the Constitution narrowly won approval in key states, such as Virginia, New York and Massachusetts. The First Congress then approved the Bill of Rights which were ratified in 1791. [For details, see Robert Parry’s America’s Stolen Narrative.]

Behind the Second Amendment

The Second Amendment dealt with concerns about “security” and the need for trained militias to ensure what the Constitution called “domestic Tranquility.” There was also hesitancy among many Framers about the costs and risks from a large standing army, thus making militias composed of citizens an attractive alternative.

So, the Second Amendment read:  “A well-regulated Militia, being necessary to the security of a free State, the right of the people to keep and bear Arms, shall not be infringed.” Contrary to some current right-wing fantasies about the Framers wanting to encourage popular uprisings over grievances, the language of the amendment is clearly aimed at maintaining order within the country.

That point was driven home by the actions of the Second Congress amid another uprising which erupted in 1791 in western Pennsylvania. This anti-tax revolt, known as the Whiskey Rebellion, prompted Congress in 1792 to expand on the idea of “a well-regulated militia” by passing the Militia Acts which required all military-age white males to obtain their own muskets and equipment for service in militias.

In 1794, President Washington, who was determined to demonstrate the young government’s resolve, led a combined force of state militias against the Whiskey rebels. Their revolt soon collapsed and order was restored, demonstrating how the Second Amendment helped serve the government in maintaining “security,” as the Amendment says.

Beyond this clear historical record that the Framers’ intent was to create security for the new Republic, not promote armed rebellions there is also the simple logic that the Framers represented the young nation’s aristocracy. Many, like Washington, owned vast tracts of land. They recognized that a strong central government and domestic tranquility were in their economic interests.

So, it would be counterintuitive as well as anti-historical to believe that Madison and Washington wanted to arm the population so the discontented could resist the constitutionally elected government. In reality, the Framers wanted to arm the people at least the white males so uprisings, whether economic clashes like Shays’ Rebellion, anti-tax protests like the Whiskey Rebellion, attacks by Native Americans or slave revolts, could be repulsed.

However, the Right has invested heavily during the last several decades in fabricating a different national narrative, one that ignores both logic and the historical record. In this right-wing fantasy, the Framers wanted everyone to have a gun so they could violently resist their own government. To that end, a few incendiary quotes are cherry-picked or taken out of context.

This “history” has then been amplified through the Right’s powerful propaganda apparatus Fox News, talk radio, the Internet and ideological publications to persuade millions of Americans that their possession of semi-automatic assault rifles and other powerful firearms is what the Framers intended, that today’s gun-owners are fulfilling some centuries-old American duty.

The mythology about the Framers and the Second Amendment is, of course, only part of the fake history that the Right has created to persuade ill-informed Tea Partiers that they should dress up in Revolutionary War costumes and channel the spirits of men like Washington and Madison.

But this gun fable is particularly insidious because it obstructs efforts by today’s government to enact commonsense gun-control laws and thus the false narrative makes possible the kinds of slaughters that erupt periodically across the United States, most recently in Newtown, Connecticut, where 20 schoolchildren and six teachers were murdered in minutes by an unstable young man with a civilian version of the M-16 combat rifle.

While it’s absurd to think that the Founders could have even contemplated such an act in their 18th Century world of single-fire muskets that required time-consuming reloading right-wing gun advocates have evaded that obvious reality by postulating that Washington, Madison and other Framers would have wanted a highly armed population to commit what the Constitution defined as treason against the United States.

Today’s American Right is drunk on some very bad history, which is as dangerous as it is false.

← The Beat-Down of ‘Public Servants’
An Incurious ‘Zero Dark Thirty’ →