For several decades, the American Right has heaped contempt on government employees as part of a strategy to delegitimize federal regulation of the private sector, contributing to such disasters as the Wall Street meltdown of 2008. But the beat-down of “public servants” goes on, says ex-CIA analyst Paul R. Pillar.

The annual survey of job satisfaction of federal employees has been released, and the picture is not pretty. Overall job satisfaction suffered its biggest one-year decline and is as low as it has been since the survey began nine years ago.

The survey provides some comparison with sentiments of employees in the private sector. The job satisfaction index computed from the survey data is 60.8 for federal employees; for private-sector employees the corresponding figure, which did not drop this year, is 70.0. 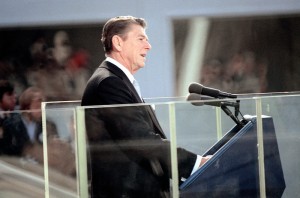 President Ronald Reagan giving his First Inaugural Address in which he declared, “government is the problem.”

One does not have to look hard for sources of the feds’ malaise. They are about to enter the third year of a pay freeze, and the Federal Salary Council calculates that federal employees are now underpaid by about 35 percent compared to counterparts in the private sector. (The biggest contributing factors to drops during the past two years in federal employees’ satisfaction, as measured by the survey, involved pay.)

Not quantifiable but no doubt also a major contributor is a nationwide ideological drift, fueled from one side of the political spectrum but affecting the entire national political climate, that disparages the contributions of government and of those who serve in it. The employees, like other Americans, constantly hear a refrain of “private sector good, government bad.”

Some have questioned the realities about monetary compensation, and this has said more about the questioners and their ignorance than about the federal employees. The American Enterprise Institute has led the charge on this issue.

Andrew Biggs and Jason Richwine of AEI tell us in an op-ed that we should not believe the Federal Salary Council, which gets its data, after all, from a “bureaucratic entity” that conducts the pay surveys, and of course we ought to be suspicious from the beginning of anything that comes from a government bureaucracy.

The AEI writers assert that a different picture would emerge if all fringe benefits, which for federal employees they say are “famously generous”, were taken into account. But they are remarkably selective in what differences they choose to highlight. They say nothing, for example, about how the federal government is famously strict and stingy when it comes to in-kind benefits on the job.

I am reminded of that every time I attend a government-sponsored conference with a mixed audience and I am fed while the government employees have to buy their own lunches. For the most talented and ambitious employees, the largest difference that Biggs and Richwine ignore is that committing to a government rather than private-sector career means forgoing any chance to attain later in one’s career a position that offers really big bucks in direct compensation as well as retirement and other fringe benefits that are way beyond what even the most senior civil servant can ever receive.

The AEI analysts present as their supposed clincher the fact that retention rates in the federal work force remain relatively low. How could that be, they ask, if these employees are underpaid?

That assumes that those employees are part of a fluid and fungible labor market, but to a large degree they are not. Even if the skills and experience in any one case are readily transferable, and in many cases they aren’t, choosing one career over another means leaving opportunities behind as time goes by and people age.

Even the most dissatisfied middle-aged federal employee will not be able to go back in time and do that corporate management trainee program or that stint as a partner-track associate in a major law firm that he or she passed up when deciding instead to enter government service.

Then there is perhaps the greatest force for retention, one that shows up clearly in the survey despite the grumbling about pay and other sources of discontent. That source is the satisfaction of working on behalf of the nation’s interest rather than on behalf of someone’s monetary profit. It is called a sense of public service.

One might ask why, if these people are willing to continue working for the public for those reasons, we shouldn’t just pocket the benefit that this arrangement provides the rest of us and not worry about what makes those employees unhappy. Fairness is one reason we shouldn’t. But it goes beyond that.

Probably the sense of public service was and is a primary motivator for most feds, but that does not mean material rewards are irrelevant to them. Certainly the issue of respect isn’t irrelevant either. Eventually an exploited, under-compensated and under-appreciated work force will mean a less effective work force.

Regardless of what happens to retention rates, we are already paying an unquantifiable but no doubt substantial price in the form of young talent that opts out of public service careers in the first place. And regarding those who stick it out in their government positions, management experts tell us that we are probably losing much more in productivity and effectiveness from a disengaged work force than the amount being saved by pay freezes.

In the public as well as the private sector, we cannot escape altogether the principle that one gets what one pays for, whether the payment comes in money or in respect. We are fortunate that the sense of public service of our fellow citizens who labor in the halls of government has shielded us from the worst consequences of our tendency to forget that principle.