Exclusive: The neocons — stung by their loss of Washington influence are trying to reestablish their clout by disqualifying former Sen. Chuck Hagel to be the new Defense Secretary. But their haste in charging off after Hagel’s scalp may lead the neocons into a dangerous last stand, writes Robert Parry.

The year 2012 has been a rough one for Washington’s arrogant neocons. Their political influence has waned since they threw in their lot with presidential loser Mitt Romney and then witnessed the ignominious resignation of their ally David Petraeus as CIA chief. But they are now mounting a fierce counterattack to reestablish their relevance by demonizing former Sen. Chuck Hagel.

Hagel has become the neocons’ new target of opportunity after emerging as a likely choice to become Defense Secretary. He is a bÃªte noire to the neocons because he is viewed as disturbingly independent of Israel’s preferences for what U.S. foreign and military policy must be. 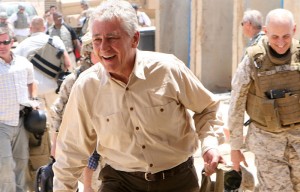 The former Republican senator from Nebraska also once made reference to Washington’s powerful “Jewish Lobby” when he apparently should have said “Israel Lobby,” though it’s often been a firing offense in Washington to publicly acknowledge the existence of any lobby favoring Israel.

Hagel has indicated, too, a preference for real negotiations with Iran regarding its nuclear program rather than simply a steady escalation of sanctions and hostilities leading inexorably to war, as Israel’s Prime Minister Benjamin Netanyahu and many neocons seem to prefer.

Another one of Hagel’s alleged sins is that he believes the vast Pentagon budget “needs to be pared down.” The Washington Post editorial page, which has long been the neocons’ media flagship in the nation’s capital, denounced that position as irresponsible and out of the mainstream.

“Mr. Hagel’s stated positions on critical issues, ranging from defense spending to Iran, fall well to the left of those pursued by Mr. Obama during his first term and place him near the fringe of the Senate that would be asked to confirm him,” the Post sniffed in a Dec. 19 editorial.

But it is clear that Hagel’s primary disqualification is that he has, at times, refused to sign on to hawkish neocon positions circulated by the American Israel Public Affairs Committee, AIPAC, such as piling on more anti-Iran sanctions and demanding that Europe designate Hezbollah, Israel’s chief foe in Lebanon, as a terrorist organization.

Thus, the neocons’ campaign to intimidate Obama into pulling back Hagel’s expected nomination has become a test of whether the neocons can still exert enough muscle to block disfavored American citizens from holding public office. Such hardball tactics succeeded during Obama’s first term.

The War on Chas Freeman

Indeed, the neocons’ current offensive against Hagel is reminiscent of their successful drive in 2009 to blackball former U.S. Ambassador Chas W. Freeman from getting a job as chairman of the National Intelligence Council. Freeman, a former ambassador to Saudi Arabia, was decried as a “realist” who was too friendly with Arab countries.

“Realist ideology pays no attention to moral differences between states,” Jon Chait wrote in an op-ed for the Washington Post entitled “Obama’s Intelligence Blunder.” Chait, a senior editor at the neocon New Republic, added: “As far as realists are concerned, there’s no way to think about the way governments act except as the pursuit of self-interest.”

But Freeman’s real crime was again a lack of sufficient ardor toward Israel and his recognition that an Israel Lobby actually exists in Washington.

“Realists tend not to abide the American alliance with Israel, which rests on shared values with a fellow imperfect democracy rather than on a cold analysis of America’s interests,” Chait wrote. “Taken to extremes, realism’s blindness to morality can lead it wildly astray. Stephen Walt and John Mearsheimer, both staunch realists, wrote ‘The Israel Lobby,’ a hyperbolic attack on Zionist political influence.

“Freeman praised ‘The Israel Lobby’ while indulging in its characteristic paranoia. ‘No one else in the United States has dared to publish this article,’ he told a Saudi news service in 2006, ‘given the political penalties that the lobby imposes on those who criticize it.’”

“The announcement that the Obama administration would turn over the job of preparing National Intelligence Estimates to a man whom Saudi Arabia, China, Iran and Hamas surely consider an agent of influence calls to mind an old axiom about Charles ‘Chas’ Freeman’s new line of work, ‘Garbage in, garbage out,’” Gaffney wrote.

Faced with this furious reaction to the appointment of Freeman, the novice President Barack Obama quickly retreated. Freeman was forced to step down, and the neocons celebrated their reassertion of political clout even in Obama’s Washington. They also could still count as key allies much of Bush’s old national security team retained by Obama, from Gen. David Petraeus to Defense Secretary Robert Gates.

In a later book, America’s Misadventures in the Middle East, Freeman noted that the day after he withdrew his acceptance of the job, the Washington Post published “an unsigned editorial calling me a ‘crackpot’ for imagining that there was an Israel Lobby and that it had opposed me.”

It is in such a world of funhouse mirrors — where reality is endlessly distorted — that the neocons have amassed their extraordinary influence in Washington. They have long demonstrated a capacity to turn anything into anything, whether manufacturing a false reality about Iraq’s WMD or delegitimizing loyal American public servants who somehow represent a threat to their power.

However, the neocons have gradually lost ground under President Obama, especially when compared to how they ruled the roost under President George W. Bush. In 2011, Gates finally was replaced at the Pentagon and Petraeus was moved from his high-profile role as a four-star military commander to the less public position of CIA director.

In 2012, with Obama suffering low approval ratings and congressional Republicans hounding him on the economy, the neocons saw their chance to reclaim control of U.S. foreign policy by helping Mitt Romney win the presidency. Up to Election Night, some were surely fantasizing about their new titles at the NSC or State or Defense or the CIA.

The neocons were as stunned as Karl Rove and other GOP operatives when their predictions of a Romney landslide evaporated as the actual votes of the American people were counted. Instead of cashing in their chits with President Romney, the neocons were facing four more years on the outside-looking-in under President Obama.

Then, just days after Obama’s reelection, a second shoe dropped. One of the neocons’ last senior allies in the U.S. government, CIA Director Petraeus, was forced to resign as a result of a humiliating sex scandal.

The stunned neocons suddenly looked out over a Washington where they no longer held key government positions and few possessed top-secret security clearances. They still held lucrative jobs at think tanks and had prominent space on op-ed pages but their direct control of U.S. foreign policy was ending.

Thus, the significance of the neocon counteroffensive against Chuck Hagel, a generally popular Republican who served with distinction as a soldier during the Vietnam War. To demonstrate their continued clout in Washington, the neocons must show they can still claim some important scalps and can still frighten President Obama into retreat.

But the risk the neocons run is that their bold march in pursuit of Sen. Hagel’s scalp may turn out instead to be something of the Neocons’ Last Stand.