The U.S. government spends hundreds of billions of dollars a year to fight or prepare to fight wars against supposed security threats around the world. But far less money is invested in what many experts believe will be the greatest security threat, global warming, as John M. Repp explains.

The real security of our society and our world depends upon changing how we produce and use energy. We need to get off fossil fuels, change how we farm and refit our buildings. There is a strong consensus among our scientists that this is necessary to prevent catastrophic climate change. We listened to our scientists when they said they could build a weapon to defeat Hitler and we should listen to them now.

This is a huge project and contrary to the current thinking in Washington D.C. which demands more and more privatization, this project should be done with government spending on the scale that occurred during World War II because defeating this problem is just as important as the Manhattan Project and far more moral. There is a research paper at the Institute for Policy Studies website entitled “The Green Dividend” which should be better known. 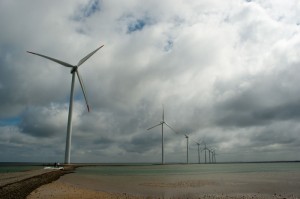 A windpark in Denmark. (Photo by Fanny Schertzer)

This report explains how the government could move the money it now spends on weapons systems at large companies like Boeing, to projects that help us get off of fossil fuels. Done right, no jobs would be lost and the industrial part of the military-industrial complex would become less dependent on military contracts; instead those companies would become part of the effort to prevent the worst effects of global climate change.

There could even be cost-plus contracts if they are closely regulated. This involves addressing the deeper threats to national security, which are not solely from violence. The Pentagon hurts in this struggle, it is the largest consumer of fossil fuel in the world. It cannot help, firing our expensive missiles into the rising sea levels that will flood our cities or flying sorties against the more and more destructive hurricanes produced by climate change is a silly example of how powerless armed might is against some threats to our national security.

When I worked at Boeing during the Carter Administration, I watched the fabrication of a huge windmill in a building near where I worked in Seattle, the same building where thousands of B-17 bombers were built during World War II. In the 1970s, Boeing engineers also developed solar cells that generated electricity from the infrared spectrum as well as the visible spectrum, but the company sold the patent when the push for diversification ended.

Preventing global climate change would be less expensive than trying to mitigate the effects of climate chaos, e.g. building sea walls around our vulnerable cities. If we do this right, we could have full employment for several generations.

There are only two places the U.S. government can get the money to do this: from the super wealthy and the huge Pentagon budget. We did not hesitate to use very steep progressive taxation during World War II to fund our mobilization. We must do the same now and we should not hesitate to shift enough funds from the Pentagon to get this job done.

← The Geopolitics of Pistachios
A Long Pursuit of the Real Jesus →