For Christians, the search for the real Jesus can be a challenging pursuit, given the two millennia of doctrine, dogma and distortion that have built up around his teachings. For some followers, the key has been to strip away those traditions and find a purer historical understanding, says Rev. Howard Bess.

Christians agree that the meaning of gospel is good news, but there is major disagreement about the content of that good news. Over the years on this subject, I have had a radical change of mind.

As my readers are aware, I was raised as a Baptist Evangelical, and my church defined the content of the good news. That story line is familiar:  I, along with all other human beings, was a sinner bearing the sin of Adam and reinforcing my sinful nature by my own choices and actions. My life was an offense to a righteous God. 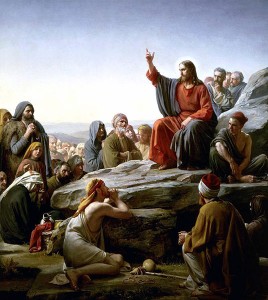 My sins became not just offensive to God but also debts that had to be paid.  God, out of love for mankind, sent his son into the world. His name was Jesus, and he came into the world for only one purpose. He came to die on the cross as a righteous payment for my impossible debts to God.

In Jesus, God accepted me into his holy family. With all my sins forgiven, I was assured that when I die, I would go to Heaven and live eternally as a citizen in the Kingdom of God. Escaping Hell and being promised eternal Heaven was the good news. It was the Gospel of Jesus Christ.

This was still my understanding of the Gospel when I graduated from college, even though college began giving me questions that I could not reasonably answer. Graduate school gave me even more questions with no answers.

I became a young pastor and in the real world I began adding more content to the meaning of the good news Gospel. I came to understand myself as a pastor who was to be good news in the name of Jesus to every person whom I met.

I lost all interest in being the judge of anyone and came to see that everyone needed love, kindness and grace. Sins were forgiven because God loves us, not because a sin debt was paid to an angry God.

A major change in my thinking took place over 40 year ago at a week-long continuing education event at Westmont College in Santa Barbara, California, under the sponsorship of my denomination. I took an intensive course on the parables of Jesus taught by William Herzog II, a young seminary New Testament professor.

My thinking was exposed to a very different Jesus. He did not come into the world to die for the sins of the world. He was an involved social activist who carried his message to people in Galilee by telling stories. Placed in their social and historic context, the stories were good news to poor, oppressed people.

Jesus, the teacher from Nazareth in Galilee, was good news to the people who listened to him.  He gave them hope and a new understanding of the Kingdom of God. I realized that Jesus was indeed good news but not in the same way that I was taught in my younger years.

Once I asked that question, I realized that I had allowed Paul, particularly in the book of Romans, to interpret the meaning of the Gospel. Paul, being the earliest writer of material in the New Testament, had become the great interpreter of the Christian Gospel.

I had been making a fundamental error. I should let Jesus speak for himself. Jesus, not Paul, is the key to understanding the message of good news. Paul should at best be given a secondary role.

I am not a scholar, but I consider myself a very dedicated and committed student who is eager to know everything I can about this unique person named Jesus, who appeared in northern Palestine about 2,000 years ago.

I am convinced that the evidence is that Jesus lived and that a reliable body of his teachings was preserved, especially in the stories (parables) he told and the aphorisms (short one-line sayings) that he repeated over and over again.

The heart of his message was the kingdom of God is here and it is time for God’s people to live out the love, mercy, peace and justice that is fundamental to the reign of a loving God.

13 comments for “A Long Pursuit of the Real Jesus”