The lethal-drone debate’s focus on the legality of killing Americans in al-Qaeda obscures the larger problem of waging war indiscriminately and thus creating new enemies. In that view, President Obama has stretched his legal authority past the breaking point, says Independent Institute’s Ivan Eland.

Although so far, President Barack Obama seems to have less warlike inclinations than George W. Bush (perhaps damning by faint praise), getting out of Iraq, finally scheduling to mostly pull out of Afghanistan, and going against all national security advisers by refusing to lethally arm Syrian rebels, in one area he seems more bellicose. That area is war from the air.

Obama’s Democratic predecessor, Bill Clinton, learned from his own fiasco in Somalia in 1993, when U.S. Rangers were killed, to avoid interventions on the ground by instead prosecuting air campaigns (against Bosnia, Kosovo, and Saddam’s Iraq). Similarly, Obama has learned from George W. Bush’s quagmire in Iraq and Bush’s and his tar pit in Afghanistan to avoid ground pounding in favor of strikes from the air. And air campaigns are usually cheaper in blood and treasure than slogs on the ground. 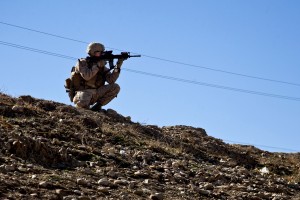 U.S. Marine uses the optic lens on his M4 carbine to scan the area in the Kajak district of Afghanistan’s Helmand province on Feb. 8, 2013. (U.S. Marine Corps photo by Cpl. Kowshon Ye)

However, just because air war is cheaper and no Americans are normally killed, it doesn’t make such military intervention a good idea or constitutional. In Libya, the use of allied air power to overthrow Muammar Qaddafi has further destabilized the country, led to the deaths of the U.S. diplomatic personnel at the hands of Islamists empowered during the conflict, and distributed Qaddafi’s huge weapons stockpiles to other unstable countries in Africa, including Islamists in Mali who took over half that country.

Similarly, Obama’s expansion of George W. Bush’s drone war (targeted assassinations really) against Islamist extremists has become counterproductive. Originally centered on killing high-level operatives of the main trunk of al Qaeda in Pakistan who were trying to strike the United States, now American drone attacks are mainly striking mid-to low-level Islamist fighters in Pakistan and Yemen who focus their attacks on the Pakistani and Yemeni governments.

As the attempted Times Square and underwear bombings show, the U.S. now has new enemies in the Pakistani Taliban and al-Qaeda in the Arabian Peninsula, respectively. The same blowback may happen in Somalia and other countries where drones are being used to target would-be terrorists. These examples show what mischief presidential administrations and military bureaucracies can get into when they run out of top-tier targets.

Even more problematical than the blowback is the dubious constitutionality of the expanded drone campaign. Although even liberals have been screaming that Obama’s killing of Americans with drones is a violation of civil liberties, that problem is not the most severe. The worst problem is Obama’s killing of Americans anywhere anytime using secret criteria.

If a band of Americans decided to participate against the U.S. government in a conventional war that was properly declared or approved by Congress, the president could constitutionally kill his fellow citizens without trial, using drones or any other weapon system.

One could even make the case from the debates in the Constitutional Convention of 1787 that George W. Bush had the constitutional authority to take initial military action against the perpetrators of the 9/11 attacks (including any Americans) without congressional authorization, as long as he believed he was stymieing another imminent attack.

However, as the severity of the immediate threat waned, Bush then should have sought authorization from Congress for any continuing war. Bush actually exceeded this constitutional standard by getting Congress to pass an Authorization of the Use of Military Force (AUMF) against the perpetrators of 9/11 and any nation harboring them even before he took any military action in Afghanistan.

Obama’s lawyers have argued that it would be lawful to kill a U.S. citizen if “an informed high-level official” of the government decided that the target was a ranking person in al Qaeda who was “an imminent threat of violent attack against the United States” and if his capture was not possible.

The major problems with Obama’s expanded drone war are that he is stretching the terms “imminent threat” beyond recognition to justify dubious unilateral presidential action and that he is now targeting regional al-Qaeda affiliates in Pakistan, Yemen, and Somalia, all of which had no role in the 9/11 strikes and which focus their attacks mainly against local governments.

This expanded war is congressionally unauthorized, and so it is illegal and unconstitutional to kill anyone in these countries, Americans or foreign peoples.

There is now talk about setting up a secret court to approve adding Americans to the terrorist kill list, much like the Foreign Intelligence Surveillance Act (FISA) court does for spying on Americans. Although this is some check on the Executive Branch (although the FISA court has let presidential administrations run wild by denying very few requests for surveillance), court approved killings will merely validate the president in conducting secret, undeclared, and therefore congressionally unapproved wars, thus, essentially being able to kill anyone anywhere he wants using secret criteria, Americans included.

These secret wars are a much bigger deal than just killing a few American would-be terrorists here and there and have no place in a republic. If a state of war for the United States doesn’t exist in these far-flung places, the president shouldn’t be killing anybody, and Americans accused of terrorism outside congressionally approved battlefields require due legal process in open court.

← Thin Line: ‘Good/Bad Guy with a Gun’
The Almost Vanunu →