It sounds like a script from a science-fiction movie, a giant asteroid on a collision course with earth, threatening all life on the planet. But the existence of this existential threat is not entirely fiction and last week’s near misses suggest governments should pay more attention, says ex-CIA analyst Paul R. Pillar.

Those with a bent for the supernatural might think that cosmic events last Friday were the sending of some sort of message. The earth encountered two asteroids, a known one that passed closely but harmlessly as predicted, and an unknown one that was smaller but still big enough to cause an explosion, estimated at 300-500 kilotons, that injured about a thousand people in Russia.

The two objects were on much different trajectories, and NASA’s Near Earth Object Program tells us that the two encounters occurring on the same day were “pure coincidence.” If anyone chooses to see the occurrences as a kind of warning, however, that is probably a good thing, because protection from bombardment by asteroids and comets deserves more priority and resources than it currently gets. 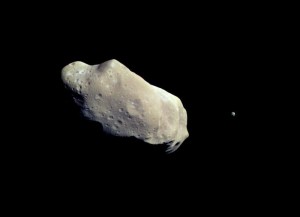 Some asteroids are so large they can have their own moons, like asteroid 243 Ida, photographed by the Galileo spacecraft on Aug. 28, 1993. The tiny moon is visible to the right side of the asteroid. (Photo credit; NASA)

The insufficient priority illustrates deficiencies in our political process that manifest themselves in many other ways. One of those deficiencies, which is rooted in a more general psychological tendency, is an inability to analyze properly low-probability events and responses to them.

Oh, sometimes it sounds like we are paying good attention to such events. It was just a few years ago that Dick Cheney was saying that even if there were only a one percent chance of something like an aggressive dictator getting his hands on weapons of mass destruction, we need to do something about it. But that comment did not really reflect any analysis.

The probability of a problem occurring does matter, partly because of the costs and risks of trying to do something about the problem. Cheney’s comment was only a rhetorical device for expressing his preference for doing something about the particular dictator he had in mind.

More generally, we tend to give too much attention to certain low-probability events that for some reason have come to frighten and fascinate us, which is true of some terrorism scenarios. Meanwhile, other low-probability events we basically ignore, even though the very high consequences if they did occur mean that if we apply good expected-utility analysis we should be paying more attention to them.

Richard Posner’s book Catastrophe is a useful corrective to these tendencies, describing what good policy analysis ought to look like when addressing low-probability, high-impact events. Among Posner’s conclusions is that the danger of asteroid collisions probably ought to get more priority than it has received so far.

Friday’s events were enough to elicit some encouraging sounds from politicians, including an op-ed from Rep. Rush Holt, D-New Jersey, a physicist and former assistant director of the Princeton Plasma Physics Laboratory, and his congressional colleague Donna Edwards, D-Maryland. Perhaps more significant, because it comes from the side of the aisle more accustomed to opposing increased spending on anything other than the military, was a statement from Rep. Lamar Smith, R-Texas, chairman of the House Committee on Science, Space and Technology.

Although Smith did not say anything about increased spending, he did describe work on this subject as “critical to our future.” Smith said, “We should continue to invest in systems that identify threatening asteroids and develop contingencies, if needed, to change the course of an asteroid headed toward Earth.”

One can hope that members of Congress will come to recognize protection from natural threats from outer space as being at least as much “defense” in the most literal sense as much that is funded in the budget for the U.S. Department of Defense.

It will be interesting to see how this issue plays in Russia. Astronomers tell us that hits from asteroids on the order of the ones that caused Friday’s air burst and the 1908 Tunguska event (which flattened trees over a wide area farther east in Siberia) are once-in-a-century events. Russia has now taken on behalf of the planet the hits for the Twentieth and, so far, the Twenty-First centuries. Prime Minister Medvedev made a comment about how Friday’s event shows that the whole planet is vulnerable, and a deputy prime minister was arguing for some kind of terrestrial defense system to reduce damage from similar happenings.

One might wonder, however, how much Russians will be inclined to shrug off asteroid hits as just another of the many impositions and hazards they have to put up with. The area around Chelyabinsk, where the meteor struck, has long been one of the worst spots in the world for radioactive pollution. This is because of a plutonium production and reprocessing complex that has had several accidents, including an especially bad one in 1957.

The Danish filmmaker Boris Bertram made a documentary in Chelyabinsk called Tankograd (a nickname for the city, after its role as a producer of armaments in World War II) that addresses the radioactivity problem as necessarily a concern for health care professionals who have to deal with the consequences but not a subject that is dwelt upon by other citizens going about their daily lives.

The international dimension, which Medvedev noted, of the threat from objects in space gets to another shortcoming in the U.S. political process. This involves the antipathy some American political persuasions have against almost anything multilateral, especially where decisions of national security are involved.

On this subject unilateralism will not work. This is not mainly because of shortcomings in what the United States can do technologically (although we ought to remind ourselves that currently we are dependent on Russian spacecraft to ferry astronauts to and from the international space station).

NASA’s Deep Impact mission in 2005 successfully crashed a spacecraft into a comet. A bigger need for international cooperation may be in the detection of earth-bound objects. The currently weakest part of that effort involves the part of the sky visible only from the southern hemisphere.

The stickiest issues involving international cooperation and possible American reservations about it may concern decisions about taking preventive action once an earth-bound object is sighted. Even if an object-deflecting system is physically in place and ready to go, how is the decision made to use it?

We can hope that any such situation that arises will be a straightforward one in which one can accurately say that what’s good for the United States is good for the planet, and the U.S. president gives the order to save both. But one can imagine other situations, such as if the object is discovered too late to be able to keep it from hitting Earth altogether, and the issue becomes one in which intervention might make it more likely or less likely to hit certain parts of the planet.

3 comments for “Planning for an Asteroid Threat”