One problem in assessing blame for terror attacks in the Middle East is that governments have political interests in linking these outrages to enemies and then pushing that case in public forums. That dynamic may now be influencing the probe of a terror bombing in Bulgaria, reports Gareth Porter for Inter Press Service.

Bulgarian Interior Minister Tsvetan Tsvetanov’s dramatic announcement last Tuesday on the Bulgarian investigation of the July 2012 terror bombing of an Israeli tourist bus was initially reported by Western news media as suggesting clear evidence of Hezbollah’s responsibility for the killings.

But more accurate reports on the minister’s statement and the only details he provided reveal that the alleged link between the bomb suspects and Hezbollah was merely an “assumption” rather than a conclusion based on specific evidence. 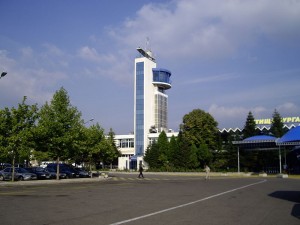 The airport in Burgas, Bulgaria, near the site of the 2012 bombing. (Photo credit: Christian Rasmussen)

Tsvetanov was quoted by various Western news outlets as saying, “We have established that the two were members of the militant wing of Hezbollah.” The minister also said, “There is data showing the financing and connection between Hezbollah and the two suspects,” according to the BBC and Jerusalem Post.

Those statements implied that the Bulgarian investigators had uncovered direct evidence of Hezbollah’s involvement in the Burgas bombing.

But the New York Times on Wednesday quoted Tsvetanov as saying, in remarks to a session of Bulgaria’s Consultative Council on National Security Tuesday, “A reasonable assumption, I repeat a reasonable assumption, can be made that the two of them were members of the militant wing of Hezbollah.” That statement appeared to acknowledge that he was merely speculating on the basis of data that doesn’t necessarily support that conclusion.

In a report on Wednesday by Sofia News Agency, Bulgaria’s largest English-language news provider, Tsvetanov was quoted as saying that the investigation had led to a “well-founded assumption” that two of the perpetrators of the deadly attack belonged to what the Bulgarian government is calling the “militant wing of Hezbollah.”

In an interview with Bulgarian National Radio Wednesday, the Bulgarian chief prosecutor, Sotir Tsatsarov, emphasized that the investigation of the Burgas bus bombing had not been concluded and expressed concern about the term “well-founded assumption.”

The chief prosecutor implied that Tsvetanov’s conclusion about Hezbollah might have been swayed by political pressures. Tsatsarov said that the prosecutor’s office “could not be used to make political decisions or to justify them,” according to Sofia News Agency.

In a television interview for the morning broadcast of Bulgarian National Television, Bulgarian Foreign Minister Nikolay Mladenov defended Tsvetanov’s use of the phrase “well-founded assumption.” Mladenov explained that it meant that Bulgaria had “good reason” to believe that the attack had been organized and inspired by members of the militant branch of Hezbollah at this stage of the investigation, Sofia News Agency reported. But Mladenov did not claim that any of those “good reasons” consisted of hard evidence.

In an interview with Associated Press on Tuesday, Europol Director Rob Wainright said, “The Bulgarian authorities are making quite a strong assumption that this is the work of Hezbollah.” But Wainright also cited only the most general arguments in support of Tsvetanov’s “assumption,” declaring, “From what I’ve seen of the case from the very strong, obvious links to Lebanon, from the modus operandi of the terrorist attack and from other intelligence that we see I think that is a reasonable assumption.”

None of the details provided by Tsvetanov, according to press reports, involved evidence showing that two of the alleged conspirators belonged to Hezbollah or to Hezbollah financing of the terror plot. The most important piece of evidence cited by Tsvetanov was the lengthy stays in Lebanon by two of the three alleged participants in the bombing and driver’s licenses that were forged in Lebanon.

Tsvetanov said the two alleged conspirators with Canadian and Australian passports who are believed to have helped the third member of the cell carry out the Burgas bombing lived in Lebanon between 2006 and 2010. He also indicated that two of driver’s licenses used by the conspirators were “forged in Lebanon,” and that Bulgaria was able to piece together the movements of two of the suspects from Lebanon to Europe.

Those connections between the alleged conspirators and the bombing by themselves could hardly support an assumption of Hezbollah responsibility for the bombing. Al-Qaeda terrorist cells have been operating in Lebanon for years, and have the technical capability for such a bombing plot.

Members of one Al-Qaeda network of 13 men organized in different cells arrested in 2006 and 2007 confessed to having planned and carried out the 2005 assassination of Lebanese Prime Minister Rafik Hariri, although they retracted their confessions before trial.

Nevertheless, Tsvetanov offered no other specific evidence to support his conclusion about the assumed Hezbollah connection.

Another aspect of the Bulgarian investigation suggesting that information about the alleged participants is still very limited is the fact, reported by the Bulgarian daily newspaper Sega, that the investigators had found no direct communication and only “indirect indications” of ties between the Arab holding an Australian passport and the perpetrator of the attack.

The Bulgarian charge of Hezbollah responsibility for the bombing based on little more than assumption has raised the suspicion in Bulgaria that the government was under pressure from the United States and Israel to reach a conclusion that aligned with the Israeli-American position.

Foreign Minister Mladenov denied that Bulgaria was pressured into issuing a statement on the progress of the investigation. But both Israel and the United States have given evidence of wanting such a statement. Bulgaria is a member of NATO and has expanded military and intelligence ties with Israel since Israeli relations with Turkey soured in 2009.

Israel also played a key role in the Bulgarian investigation, as Interior Minister Tsvetanov acknowledged in his presentation Tuesday. He specifically thanked the Israeli government for its support in regard to the investigation and said Israel had provided “relevant expertise” in regard to one of the indicators implicitly cited as pointing to Hezbollah the identification of the false driver’s licenses used by the alleged bomb cell.

Ha’aretz reported Tuesday that Israel and the United States had both feared that, “while the investigation’s finding would be clear, Bulgaria’s public statement would be ambiguous and would not name Hezbollah responsible.”

John Brennan, President Barack Obama’s primary adviser on homeland security and counter-terrorism, issued a statement that portrayed the Bulgarian investigation as having reached a definitive conclusion. Brennan praised the Bulgarian authorities for “their determination and commitment to ensuring that Hizballah is held to account for this act of terror on European soil.”

Gareth Porter, an investigative historian and journalist specialising in U.S. national security policy, received the UK-based Gellhorn Prize for journalism for 2011 for articles on the U.S. war in Afghanistan. [This story was originally published by Inter Press Service.]

6 comments for “A Rush to Judgment in Bulgarian Blast?”