America’s “tough-guy-ism” plays well at home, with politicians competing to see whose bluster is the most belligerent, but works less well with the targeted countries whose leaders have their own imperatives of politics and pride. President Obama is risking failure in Iran nuclear talks if he ignores this reality, say Flynt and Hillary Mann Leverett.

In an Op-ed last week, we held that simply expressing an interest in “talking” to Tehran would not be enough for the Obama administration to launch successful diplomacy with Iran.

The essential ingredient, we argued, is American “acceptance” of the Islamic Republic as “a legitimate political order representing legitimate national interests”, just as President Richard Nixon’s acceptance of the People’s Republic of China enabled the realignment of U.S.-China relations in the early 1970s. 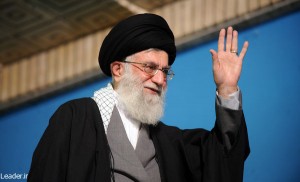 Iran’s Supreme Leader Ali Khamenei waves to commanders and personnel of the Iranian Air Force during a meeting on Feb. 7, 2013. (Iranian government photo)

Subsequent events have demonstrated the accuracy of our analysis. On Feb. 2, Vice President Joe Biden said the Obama administration was open to direct, bilateral negotiations with Iran, if “the Iranian leadership, Supreme Leader, is serious.” We warned then that:

Four days later, on Feb. 6, new U.S. sanctions against the Islamic Republic, recently signed into law by President Obama, went into effect. And a day later, as should have been expected, Iran’s Supreme Leader Ayatollah Seyed Ali Khamenei responded, saying that “Iran will never accept to negotiate with he who threatens us with pressure. The offer of talks is meaningful when the other side shows goodwill.”

As we noted in our Op-ed, the Obama administration’s current strategy, “negotiating on terms that could not possibly interest Iran while escalating covert operations, cyber-attacks, and economic warfare against it”, will not work. Indeed, it puts the United States on a trajectory toward yet another, even more self-damaging war in the Middle East.

In our new book, Going to Tehran: Why the United States Must Come to Terms with the Islamic Republic of Iran, we lay out what serious U.S. diplomacy would look like, and why it is imperative for American interests that the United States pursue “Nixon-to-China”-like rapprochement with Tehran.

As he moves into his second term, President Obama is apparently no more inclined to formulate and implement a reality-based Iran policy than he was during his first term.

Flynt Leverett served as a Middle East expert on George W. Bush’s National Security Council staff until the Iraq War and worked previously at the State Department and at the Central Intelligence Agency. Hillary Mann Leverett was the NSC expert on Iran and from 2001 to 2003  was one of only a few U.S. diplomats authorized to negotiate with the Iranians over Afghanistan, al-Qaeda and Iraq. They are authors of the new book, Going to Tehran. [To view the original of this piece, click here: http://goingtotehran.com/diplomacy-with-iran-wont-work-if-its-tied-to-sanctions-coercion-and-american-fantasies-of-regime-change ]

4 comments for “Counterproductive Bluster Toward Iran”