A key federal budget trick is using words to confuse citizens, such as labeling U.S. military spending as “defense” though much is for “offense” and sliding costs for wounded soldiers under “veterans affairs” and nuclear bombs under “energy,” as ex-CIA analyst Paul R. Pillar explains.

As budgetary battles proceed with competing rhetorical salvos about what parts of government spending are unreasonably large, or are most out of control, or are the “real” reason for burgeoning deficits (actually, every part of the budgetary equation, on both the expenditure and the revenue sides, is just as real as every other part), one welcomes the occasional breath of fresh semantic air on the subject.

Veronique de Rugy of the Mercatus Center at George Mason University, using data compiled by Winslow Wheeler of the Project on Government Oversight, observesthat the figures usually adduced to present spending on “defense” or “national security” understate by a long shot actual federal spending that is appropriately put under such labels. 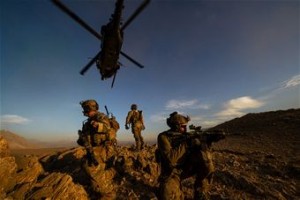 A U.S. military rescue team secures a landing site in Afghanistan after being being lowered from an HH-60 Pave Hawk during a mission Nov. 7, 2012. (U.S. Air Force photo/Staff Sgt. Jonathan Snyder)

The figure most often cited is the “base” budget of the Department of Defense, which was $535 billion for FY2012. But military and defense expenditures go well beyond that, including such things as the development of nuclear weapons, which is done in the Department of Energy, or training of foreign military forces, which come under the international affairs section of the federal budget.

Add in all those other things and the total is more like $930 billion rather than $535 billion. And that’s just current expenditures, not taking into account follow-on effects such as additional interest to be paid on the national debt.

Probably the most egregious bit of military-related budgetary legerdemain has been the practice of keeping the operational costs of the wars in Iraq and Afghanistan separate from the main Pentagon budget, as if those costs should not count as much because they are, well, sort of temporary. And so the base budget figure continues to get cited as “defense spending” even though it excludes the main, and costliest, activities in recent years of the U.S. military.

This practice makes as much sense as if I were to calculate my health care costs and to exclude stays in the hospital, instead only including recurring expenditures such as dental check-ups.

There is, admittedly, a sense in which the Iraq War should not be counted as “defense” spending. The war was not an act of defense; it was offense. But that, of course, is not the reason for the practice (begun by the administration that launched the Iraq War) of separating costs of the war from the main defense budget. The reason had much more to do with wanting to understate the actual amount the United States spends on its military.

Joseph Stiglitz and Linda Bilmes have shown how the true total cost of an endeavor such as the Iraq War goes far beyond what shows up in the federal budget and includes various secondary economic effects. Even just sticking to the federal budget, there are very large costs that do not show up in any one year’s current budget.

A big part of the follow-on cost of recent wars is the long-term care of military veterans, especially grievously wounded ones. Such costs are proportionately greater than for previous wars. Thanks to body armor and a splendid military medical system, many who would have died in earlier conflicts instead survive, but they are still maimed.

Misleading budgetary labeling is by no means confined to military spending. Grouping some government programs under the label “entitlements”, which are programs or obligations where expenditures do not reflect specific congressional appropriations but instead are determined automatically by such things as how many people happen to qualify for a statutorily defined benefit, can be justly criticized on several grounds.

One is that there is wide variation among such obligations or programs, and no reason that a single standard with a single label should apply to all of them. Another is that “entitlement” is a loaded term that implies an agreed moral obligation even when there might not be one. The term also implies, especially when contrasted with other parts of federal spending, which bear the label “discretionary”, that Congress’s hands are tied in changing this even if they really aren’t.

George Will has said that all federal spending is discretionary other than interest on the national debt. In one legalistic sense he may be right, although if one accepts that position then the extortion-facilitating device known as the debt ceiling, which treats as an option non-payment of interest on debt already incurred, looks all the more foolish and unwarranted.

Applying a common moral sense of “entitlement” to federal expenditures does not produce a classification that corresponds to the budgetary categories of entitlements and discretionary spending. Wouldn’t we all agree, for example, that wounded veterans are entitled to government-paid long-term care? And yet medical programs of the Veterans Administration come under the “discretionary” label. (And that care constitutes a big chunk of the military-related expenditure that usually does not get included as “defense spending.”)

There also is wide variation in the amount of discretion entailed in different government activities that are on the “discretionary” side of the ledger, even without getting into the questions of political feasibility that inhibit changes to many of the “entitlement” programs. Much that is labeled “discretionary” is necessary for what has come to be widely expected as a function of government.

Elimination of some of these activities would immediately be seen as a crisis, e.g., the air traffic control system operated by the Federal Aviation Administration (which gets much of its funding from a trust fund based on taxing tickets for air travel but also draws money from the general treasury). And turning back to military matters, some of these civilian activities are far less discretionary than was that very expensive war of choice in Iraq.

Also back on military matters, we should note that “entitlement” is not the only loaded term when discussing budgetary categories. “Defense” and “national security” are loaded as well. They are labels that presume a priority and importance that things not bearing those labels are presumed not to have.

But the labels are affixed to some activities, including some very expensive activities, that are more offensive than defensive and whose contribution to the security of the nation is at best a matter of conjecture or debate.

7 comments for “The Trickery of the Military Budget”