Exclusive: Richard Nixon, who was born a century ago, cast a long shadow over U.S. politics, arguably reaching to the anything-goes tactics of today’s Republican Party. His admirers want to reverse history’s negative judgment but perhaps the Nixon centennial can finally allow for recognition of Nixon’s dirtiest trick, says Robert Parry.

This year’s centennial of Richard Nixon’s birth has brought some of his old guard out the shadows in what amounts to a last-ditch battle to refurbish his reputation by stressing the positives of his five-plus years in the White House. Thus, there is much talk of Nixon’s opening to China and the Environmental Protection Agency as well as favorable comparisons between the relatively pragmatic Nixon and today’s crop of ideological Republicans.

However, this rehabilitation  led by the likes of Nixon’s National Security Adviser Henry Kissinger and daughter Julie Nixon Eisenhower ignores a darker side of Nixon’s legacy, how he helped shape the behavior of the modern GOP, bequeathing a win-at-all-cost ethos that still resonates, from the crypto-racism of his Southern Strategy to his dirty election tactics in both 1968 and 1972. 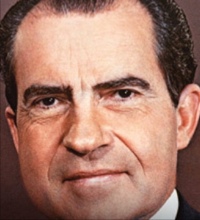 There is a direct lineage from the thinly veiled racism directed toward President Barack Obama today and Nixon’s coded appeals to unreconstructed white segregationists in the South four-plus decades ago and between Republican efforts at election rigging now and Nixon’s gaming the system through the sabotage of President Lyndon Johnson’s Vietnam peace talks in 1968 and the Watergate chicanery in 1972.

Simply put, some of the ugliest tactics of the modern Republican Party can be traced to Richard Nixon. Indeed, he could be viewed as providing the DNA for today’s GOP operatives who make quasi-racist appeals to white Southerners and who seek to suppress the votes of blacks and other minorities.

And arguably, the granddaddy of all electoral dirty tricks occurred in 1968 when Nixon’s presidential campaign went behind President Johnson’s back and got the South Vietnamese government to boycott Paris peace talks just as Johnson was on the verge of bringing the bloody Vietnam War to an end.

The evidence of this maneuver is now overwhelming, both from U.S. Archives and from personal accounts of South Vietnamese and GOP participants. Still, it remains one of those thoroughly unpleasant chapters of U.S. history that even Nixon’s critics in the mainstream media hesitate to mention.

Indeed, one of the remarkable elements of the mainstream treatment of the current Nixon rehabilitation campaign is how the Watergate scandal is raised briefly to counter the pro-Nixon spin but only in the most antiseptic ways.

It’s as if the declassified records from the past several decades never were released regarding Nixon’s 1968 caper and the fuller history of Watergate. We’re back to the narrow understanding of Watergate that prevailed at the time of Nixon’s resignation in 1974, that he had participated in the cover-up, but knew little or nothing about the actual crime.

For instance, the New York Times’ Andrew Rosenthal reflected on the ongoing reconsideration of Nixon by writing that Nixon’s “achievements, and his liberalism by the standards of today’s Republican Party, may ultimately prove more significant than his failings.” Then, after ticking off the EPA and other progressive reforms, Rosenthal lamented that Nixon’s posthumous comeback would end like many of the failed rehabilitations during his lifetime.

Rosenthal wrote, “in the end, these achievements won’t really matter as far as Nixon the Historical Figure is concerned. His flaws and his dramatic downfall will forever reduce the importance of his positive traits. Yes, he was a great political analyst and promoted important social-welfare programs, but he also was a crook who was forced to relinquish the presidency. That is his legacy.”

But Rosenthal offered no fresh historical perspective on what kind of “a crook” Nixon was or what his full legacy entails. That topic is a focus of my latest book, America’s Stolen Narrative, deriving from declassified evidence at the LBJ Library in Austin, Texas, and by piecing together other facts that have been known for years but never put into this new context.

For example, we now know that President Johnson ordered his national security aide Walt Rostow to remove from the White House the top secret file on Nixon’s sabotage of the Vietnam peace talks and that Nixon after learning of the file’s existence from FBI Director J. Edgar Hoover ordered Kissinger and White House chief of staff H.R. “Bob” Haldeman to conduct a search for this missing file.

Though Kissinger and Haldeman were able to recreate what was in the file, they failed to locate the actual file, a situation that grew critical in Nixon’s mind in June 1971 when he saw the impact of the New York Times’ publication of the Pentagon Papers, which recorded the Vietnam War deceptions from 1945 to 1967, mostly by Democratic presidents.

But Nixon knew something that few other people did, that there was a sequel to the Pentagon Papers, a file containing wiretap evidence of what Johnson had called Nixon’s “treason,” i.e. the story of how the war was prolonged so Nixon could gain a political advantage over Vice President Hubert Humphrey in 1968. If the missing file surfaced prior to Election 1972, Nixon almost surely would have faced defeat if not impeachment.

So, according to Oval Office tape recordings released in connection with the Watergate scandal Nixon on June 17, 1971, ordered a renewed effort to locate the missing file. One of Nixon’s aides believed the file was hidden in the safe at the Brookings Institution, leading Nixon to order a break-in at Brookings to recover the file.

About two weeks later, Nixon proposed having ex-CIA officer E. Howard Hunt set up a special team to conduct the Brookings break-in, which apparently never took place although Hunt did organize a team of burglars whose political spying was exposed on June 17, 1972, when five of its members were caught inside the Democratic National Committee at the Watergate complex.

In other words, the two scandals the Nixon campaign’s 1968 peace-talk sabotage and the Watergate spying operation were linked. Nixon’s fear of exposure on the first led, at least indirectly, to the second. (Exactly what was the target of the Watergate break-ins in May and June 1972 remains something of a historical mystery. Participants offered different accounts, although the burglars seemed to be engaged in a general intelligence-gathering operation, looking for any information that might be helpful to Nixon’s reelection campaign, both what surprises the Democrats might plan to spring on the President and any insights into Democratic vulnerabilities.)

As it turned out, Johnson’s 1968 file containing wiretap evidence of the Nixon campaign’s appeal to the South Vietnamese government to torpedo the Vietnam peace talks remained in the possession of Walt Rostow who had no inclination to release it, at least not until after Johnson’s death. Even then, after Johnson died on Jan. 22, 1973, two days into Nixon’s second term, Rostow decided that the file should be kept secret at the LBJ Library for at least another 50 years.

It was not until the 1990s when the LBJ Library overruled Rostow and opened the file, which Rostow had labeled “The ‘X’ Envelope.” That began a long declassification process, which is still not complete. Though a few historians have touched on these documents in books about Nixon and the Vietnam War, the evidence of what Johnson called Nixon’s “treason” and its connection to Watergate have never penetrated Official Washington’s conventional wisdom regarding Nixon’s legacy.

Mainstream journalists and many historians still prefer to treat Watergate as something of a one-off affair driven by Nixon’s political paranoia, not from his understandable fear that his 1968 campaign’s actions, which extended the Vietnam War for political gain, might be exposed with devastating consequences for his reelection in 1972.

By June 1971, when Nixon ordered creation of Hunt’s team to search for the missing file, the war was ripping America apart as thousands of body bags with dead American soldiers continued to come back from Vietnam, as another million or so Vietnamese died, and as the war spread into Cambodia.

Perhaps, if nothing else, the centennial commemorations of Nixon’s birth on Jan. 9, 1913, will allow for this fuller and darker understanding of Nixon’s legacy.

← The Trickery of the Military Budget
Recycling Radioactive Metals Disputed →