Even if you’re a conservative former Republican senator from Nebraska who fought for your country in Vietnam, any deviation from Official Washington’s orthodoxy opens you to ugly attack from loud voices in the news media and the political world. If you respond by trying to explain your heresy, you invite further abuse; if you retreat, you’re decried as a tongue-tied wimp. 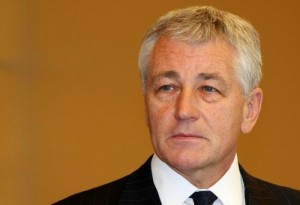 So, the American people are left to view this absurdity: Sen. Lindsey Graham, R-South Carolina, acting as if there is no Israel Lobby in Washington and as if no member of Congress has ever faced pressure from this non-existent lobby. Graham treated Hagel as if he must be mentally unstable for thinking otherwise.

Of course, Graham and everyone in the room knew that there is a powerful Israel Lobby in Washington and that nearly all members of Congress quake over the possibility of being singled out as not sufficiently supportive of Israel. One of the quickest ways to be disqualified inside Official Washington is to get the label “anti-Israel.”

Thus, when Israel’s bullying Prime Minister Benjamin Netanyahu addresses a joint session of the House and Senate, Republicans and Democrats compete to show how fast and how often they can jump to their feet in ovations, a humiliating display of obeisance that reflects badly on trained seals.

But you are not to notice this reality. The very observation is punishable by a process known as “controversialization,” i.e. you can expect to be shoved to the margins of polite Washington society and if you ever do get a chance for some significant job in government or the news media you will be subjected to what Hagel got on Thursday.

Usually, the only feasible response to such inquisitions is to repent and apologize for seeing what is plainly obvious. After all, if Hagel had reflected honestly about the open secret of the Israel Lobby, other senators would surely have joined in the verbal bashing and his chances for confirmation would have fallen dramatically.

Smelling political blood, Sen. Ted Cruz, a newly elected right-wing Republican from Texas, denounced Hagel for not challenging a caller during an interview with Al Jazeera in 2009, when the caller alleged that Israel had committed war crimes against the Palestinians.

Though many human rights organizations have documented Israel’s abuse and killing of Palestinian civilians in the Occupied West Bank and Gaza as well as its violation of  the Geneva Conventions by moving Israeli settlers onto Palestinian land the only politically acceptable position in Official Washington is to sneer at these realities.

Not surprisingly, Hagel retreated again when Cruz demanded to know, “Do you think the nation of Israel has committed war crimes?” Hagel replied, “No, I do not, Senator.”

Hagel also was excoriated for deviating from one of Official Washington’s favorite narratives, the myth of the “successful surge,” how President George W. Bush and his neocon advisers “won” the war in Iraq by courageously dispatching 30,000 more U.S. troops in 2007.

The myth is that the escalation, virtually by itself, brought peace and victory in Iraq, even though many military analysts consider the “surge,” which cost the lives of about 1,000 American soldiers and countless Iraqis, only one of many factors that accompanied the gradual decline in Iraqi violence.

And the “surge” did nothing to alter the longer arc of an eventual American defeat in Iraq, simply prolonging the forced U.S. departure until the end of 2011. The end result of the war — besides the death and destruction — is that Iraq is now run by an authoritarian Shiite government rather than an authoritarian Sunni government and has become an ally of Iran rather than a bulwark against Iran.

However, the “surge” myth is cherished by Washington’s still influential neocons and other Iraq War hawks as their shield against criticism that they rushed the United States into a war of aggression in Iraq that cost the lives of some 4,500 U.S. soldiers and hundreds of thousands of Iraqis and squandered about $1 trillion.

In interrogating Hagel, Sen. John McCain, a leading Iraq War hawk, treated the “surge” myth as one of those undeniable facts that only a crazy person would dispute. The Arizona Republican demanded a yes-or-no answer from Hagel on whether he was “wrong” when he opposed the “surge” in 2007, assuming apparently that the only possible answer was to admit error.

On this point, Hagel actually stood his ground, noting that the question was too complex for a yes-or-no answer.

“I actually would like an answer, yes or no,” McCain insisted.

“Well, I’m not going to give you a yes or no,” Hagel replied, noting that other key factors in the gradual decline in Iraqi violence had predated the “surge,” such as the so-called Sunni Awakening against al-Qaeda extremists, and that history should be the judge of the overall value of the “surge.” Hagel also referred to the Iraq War as a war of “choice.”

The answer only made McCain angrier. “I think history has already made a judgment about the surge, sir, and you’re on the wrong side of it,” McCain fumed. “And your refusal to answer whether you were right or wrong about it is going to have an impact on my judgment as to whether I vote for your confirmation or not.”

McCain is surely not alone in demanding that everyone genuflect before the myth of the “successful surge.” The U.S. mainstream news media, which was famously wrong in accepting President Bush’s false claims about Iraq’s WMD as a justification for war, also has pushed the “surge” myth as some undeniable fact.

Most notably, prominent TV interviewers, such as CBS’s Katie Couric and ABC’s George Stephanopoulos, hectored Sen. Barack Obama during Campaign 2008 to admit that he was wrong in opposing the “surge” and that his Republican opponent, McCain, was right in advocating it.

Like Hagel, Obama initially responded by saying that the question was far more complex than the U.S. news media was making it, but he eventually concluded that discretion was the better part of valor and confessed to Fox News’ Bill O’Reilly that the surge “succeeded beyond our wildest dreams.”

Obama’s surrender may have been a smart tactical maneuver to neutralize the “surge” issue in Campaign 2008 but it only hardened the erroneous conventional wisdom. The still-influential neocons grew bolder in treating the “surge” myth as a giant fig leaf that covered their nakedness on the Iraq War disaster. [See Consortiumnews.com’s “The Iraq War ‘Surge’ Myth Returns.”]

The “surge” myth also had the consequence of elevating two of its architects, Gen. David Petraeus and Defense Secretary Robert Gates, into the Washington pantheon of military geniuses. As a result, President Obama kept both of them on in his first term and they collaborated to mouse-trap him into a similar “surge” in Afghanistan in 2009, a decision that Obama reportedly came to regret almost immediately.

Ironically, too, Obama’s acceptance of the Iraq “surge” myth has now come back to bite his current nominee for Defense Secretary. But the larger problem is Official Washington’s continuing hostility toward reality and toward people who speak inconvenient truth to power.

There is something extraordinarily dangerous about the most powerful nation on earth being driven by a set of fantasies, several of which were expressed angrily by their adherents in the Senate Armed Services Committee’s hearing on Chuck Hagel.

And the risks are not just inside the government. They stretch to the U.S. news media, which even after the Iraq and Afghan debacles prefers to march in lock step with the prevailing group think, knowing that even when the group think proves disastrously wrong, there will be no accountability because the group itself is too powerful.

Rather it is for the rare independent-minded person who dares challenge the conventional wisdom regardless of the person’s record for accuracy who must be singled out for punishment. There must be discipline in compelling free thinkers to abide by the dominant orthodoxies no matter how misguided they are.

That was the real lesson from the spectacle of Chuck Hagel’s inquisition, that anyone who deviates from the group think must be disqualified from holding office in the U.S. government or for that matter any position of influence inside Official Washington. In this up-is-down world, there is no penalty for supporting the invasion of Iraq, only for criticizing the invasion of Iraq.

Further, we must all believe there is no Israel Lobby in Washington. That U.S. politicians are not influenced or intimidated by this non-existent lobby’s hardball tactics. That Israel has never committed a war crime in its treatment of Palestinians. That the Iraq War was “won” by the 2007 “surge.”

30 comments for “The Lesson in Hagel’s Inquisition”