There is one subject that most politicians avoid: talking about the media. Most spend most of their time positioning themselves for media attention because most seem to need and rely on media visibility. The media provides their political oxygen and, hence, explains why they spend so much time spinning their words with hired press secretaries, advisers and consultants.

In many ways, being on the air validates a politician’s role if not his or her existence.  Hence, many scramble to be interviewed for TV news and on Sunday shows. Media visibility is a key tool in the permanent campaigns most pols run for their reelections and to move up the political ladder. Much of the money they spend so much time raising also goes right back into the media for commercials. 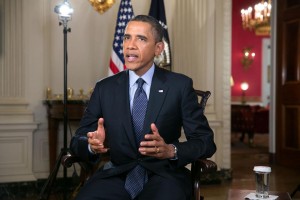 As a result, politicians usually don’t discuss their experiences with the media or their opinions about the media, perhaps out of fear of antagonizing media outlets by suggesting that they don’t operate responsibly. As is, most fear media retaliation if they step out of line or say “the wrong thing.”

President Barack Obama has become the latest politician to put his toe in the raging waters of the media debate, with some mild observations about the powerful role that media outlets play in reporting and often distorting political events.

In an interview with The New Republic, Obama stated the obvious: “One of the biggest factors is going to be how the media shapes debates. If a Republican member of Congress is not punished on Fox News or by Rush Limbaugh for working with a Democrat on a bill of common interest, then you’ll see more of them doing it.”

“The same dynamic happens on the Democratic side,” he said. “I think the difference is just that the more left-leaning media outlets recognize that compromise is not a dirty word. And I think at least leaders like myself, and I include Harry Reid and Nancy Pelosi in this, are willing to buck the more absolutist-wing elements in our party to try to get stuff done.”

Obama also criticized mainstream media outlets for their adherence to “journalism, which places equal blame on Democrats and Republicans when, according to the president, Republicans should bear more blame.”

“[T]hat’s one of the biggest problems we’ve got in how folks report about Washington right now, because I think journalists rightly value the appearance of impartiality and objectivity,” Obama observed.

“And so the default position for reporting is to say, ‘A plague on both their houses.’ On almost every issue, it’s, ‘Well, Democrats and Republicans can’t agree’, as opposed to looking at why is it that they can’t agree. Who exactly is preventing us from agreeing?”

He faults what he saw as an obsession with confrontation that contributes to the stalemate we see on Capitol Hill.

“Some of [the institutional barriers] have to do with our media and what gets attention,” he said. “Nobody gets on TV saying, ‘I agree with my colleague from the other party.’ People get on TV for calling each other names and saying the most outlandish things.”

Now this is pretty mild criticism. It does not examine why a calculated form of formulaic polarization is used to benefit the media itself by stoking ratings and eventually revenues.

Dylan Beyers of Politico notes that all media does not have an equal impact and “that right-wing media, especially Fox and Limbaugh, have an outsized influence on Republicans and are arguably more powerful than most members of Congress.”

Much of our political discourse also takes place on cable channels that do not have the audience that networks traditionally enjoyed. Everyone who works in media knows that pro wrestling was one of the most popular formats on cable with outsized almost cartoon like characters getting all the attention. Politics is just another form of wrestling with smack-downs and bitter fights increasingly common.

Former Vice President Al Gore who has been showered with media criticism for his role in selling the cable channel Current to AlJazeera, and profiting from the sale, has in the past been more insightful. (When was the last time you saw the media attack other media executives and companies for enriching themselves in media deals?)

A former journalist, Gore wrote in his 2007 book, The Assault on Reason, “In practice, what television’s dominance has come to mean is that the inherent value of political propositions put forward by candidates is now largely irrelevant compared with the image-based ad campaigns they use to shape the perceptions of voters. The high cost of these commercials has radically increased the role of money in politics, and the influence of those who contribute it.

“That is why campaign finance reform, however well drafted, often misses the main point: so long as the dominant means of engaging in political dialogue is through purchasing expensive television advertising, money will continue in one way or another to dominate American politics. And as a result, ideas will continue to play a diminished role.”

As reported on “Lost Remote,” Gore “goes on to cite the news media’s fascination over the years with O.J. Simpson, Chandra Levy, Britney Spears and Paris Hilton, among others.”

Gore writes: “In the world of television, the massive flows of information are largely in only one direction, which makes it virtually impossible for individuals to take part in what passes for a national conversation. Individuals receive, but they cannot send. They hear, but they do not speak. The ‘well-informed citizenry’ is in danger of becoming the ‘well-amused audience.’”

This is derivative of the far more trenchant TV critique called “Amusing Ourselves to Death” by the late media critic Neil Postman whose ideas, among many from media critics, are rarely seen or heard on the air.

Responding to Gore’s book in 2007, the industry magazine Broadcasting & Cable spanked the former Vice President for “groaning” and daring to blame any of our social/cultural problems on TV, writing:

“Television didn’t create this situation. It is there to be watched, or not. It can be tuned to Spike or PBS. Al Gore concludes that the ‘well-informed citizenry’ is in danger of becoming the ‘well-amused audience.’ There are some ‘inconvenient truths’ in Gore’s media screed. There’s also a load of hyperbole.”

How profound (or not)! But saying Gore is “groaning” is just a way of deriding and dismissing his critique. He tried but failed to build Current into a channel that could challenge our mediaocracy, but maybe just by being there, he helped create the possibility that its successor, the forthcoming “AlJazeera, America” can do a better job.

News Dissector Danny Schechter edits Mediachannel.org, the media watch network that goes back on line this week. He blogs at Newsdissector.net. He also hosts a show on ProgressiveRadioNetwork.com (PRN.fm) Comments to dissector@mediachannel.org

2 comments for “Obama’s Annoyance with Media”