Congressional “tough-guy-ism” blocking President Obama’s plan to shutter the Guantanamo Bay prison and insisting on military tribunals for 9/11 terrorism suspects is making the prosecutions harder than if they had been transferred to civilian courts, an irony addressed by ex-CIA analyst Paul R. Pillar.

During a hearing Monday to consider pre-trial motions before the military tribunal at Guantanamo that is handling the case of Khalid Sheik Mohammed and four other defendants charged with perpetrating the 9/11 attacks, the audio and video feeds that run from the courtroom to media rooms and are the only way for the outside world to follow the proceedings were mysteriously interrupted for several minutes.

No one who is saying anything to the outside world seems to know the reason for the interruption. The colonel who is the presiding judge seemed not to know on Monday. A member of the prosecution team said she does know but, with the cameras and microphones back on, would not explain. The following day the judge seemed satisfied with whatever explanation he apparently got, but he wasn’t talking either. 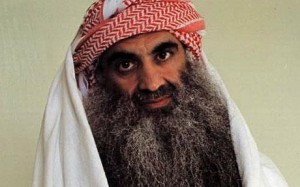 Khalid Sheikh Mohammed, the accused mastermind of the 9/11 attacks, in a photo taken in July 2009.

The mysterious electronic gap is a fitting sample of much that is strange about the detention facility at Guantanamo and what goes on there. Part of the strangeness is about Guantanamo itself; other parts are about things that are centered at, or symbolized by Guantanamo, including the basis for indefinite detention of people suspected of involvement in terrorism and the military tribunal system used to try some of them.

What is odd about the facility itself is its anomalous legal status, being on a U.S. military base with a long-term lease from Cuba. Decision-makers in the George W. Bush administration selected the place to establish a detention center that would be as much as possible out of the reach of anyone’s law. The Supreme Court has frustrated whatever hope there may have been to keep it entirely outside the reach of the law, but the anomaly of the place continues to be a basis for the legal uncertainty of much of what goes on there.

One of the latest of the many legal uncertainties about the military tribunal system concerns whether it can be used to try defendants for anything other than crimes of war. There is disagreement about whether prosecutors can bring to a tribunal conspiracy charges of the sort that can certainly be brought in a civilian court. The Department of Justice says they can; the military judge in charge of the tribunals says they can’t (while adding that this very disagreement demonstrates the tribunals’ independence and by implication their fairness).

Besides the uncertainty, there is an irony given how members of Congress who have forced the handling of terrorism cases out of the civilian courts and into military tribunals may have thought that this tough handling of the subject as “war” would mean greater power and freedom to punish terrorists without prosecutors’ jobs being complicated by all the rules of evidence and whatnot that civilian courts have. With regard to something like the use of conspiracy charges, the move to military tribunals means less, not more, flexibility in what prosecutors can do.

Also in the news this week is the administration’s announcement that the State Department official who has been charged with negotiating new custody arrangements for Guantanamo prisoners is being reassigned without being replaced. This move is being interpreted as a tacit admission by the Obama administration that it will not realize its goal of closing the detention facility at Guantanamo, although officially the administration says that is still the goal.

Failure to meet that goal is partly due to facing the reality of each detainee’s case being different and many of them being complicated. The failure is in large part due again to Congress, which has restricted movement of detainees both to the United States and to some of the key foreign countries. Thus another irony: the actions of those who think in terms of a “war on terror” with a beginning and an end have laid the basis for a supposedly temporary detention system that will have no end.

President Obama recently appointed former prosecutor Mary Jo White to head the Securities and Exchange Commission. As U.S. attorney for the Southern District of New York, White’s office successfully prosecuted several of the highest profile terrorism cases, the experience that most refutes some of the chief arguments made in favor of reliance on the military tribunal system.

Although at the SEC White will be a regulator rather than a prosecutor, the administration’s evident hope and message in making this appointment is that Wall Street crooks will face effective punishment. Maybe the United States will handle the cases of such crooks with greater rationality, consistency and effectiveness than it seems to be handling the cases of suspected terrorists at Guantanamo.

← Obama’s Annoyance with Media
When Truth Tried to Stop War →

3 comments for “How Congress Undermined 9/11 Cases”