President Obama’s Second Inaugural Address surprised some pundits with his strong messages on climate change, immigration reform, gun safety and other social issues. But whether real action follows will depend on a shift in public consciousness, says Robert F. Dodge.

This year’s presidential inauguration on Martin Luther King Day finds us as a nation and people at a remarkable crossroads. We have the same daunting issues we have faced for years before us; and yet there is something different.

There is a developing shift in our consciousness and responsibility. We are witnessing a new awareness of the challenges and necessity of addressing them. What is needed is the collective will and steadfastness of effort to realize the opportunities that are upon us. 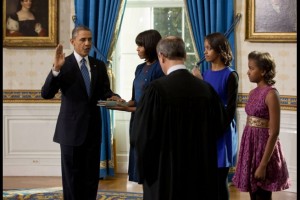 This year commemorates profound social events in history, from the 150th anniversary of the signing of the Emancipation Proclamation to Dr. King’s “I Have a Dream” speech 50 years ago. That dream and challenge is alive and vital today, and recent events have made the need to realize it ever more apparent.

From Hurricane Sandy to Sandy Hook, the challenges we face loom large. They range from climate change, gun control, immigration reform, to mass incarceration, war and social and environmental justice. On our shared planet, there is a demand for environmental sustainability, social justice and spiritual fulfillment. We must recognize that these issues are all connected. Not one can be had without the others. The tipping point on these issues is at hand.

Daily we witness the devastating effects of climate change, from year after year record temperatures and 2012 being the warmest year on record for the lower 48 U.S. states. We see the catastrophic global storms and record melting of the Arctic Sea ice. People are making the connection of extreme weather and climate change. The storms affect everyone, though poor and underdeveloped communities and civilizations feel a disproportionate brunt with resultant environmental injustice.

Gun violence is a public health threat and national disgrace. Averaging 87 gun-related deaths per day, the United States saw more than 30,000 of our citizens die last year from gunshot. Gun-related deaths are the leading cause of death among inner city black children and teens.

This “war” rages on everyday right here on our soil. According to Bloomberg News, deaths from these weapons of mass destruction will soon overtake annual auto fatalities. This public health threat has gone on for far too long.

As with any public health threat, prevention is key. A sad and paradoxical outcome of the Sandy Hook shootings and the loss of innocent white school children and teachers is that previous congressional adversaries to gun control are starting to evolve, recognizing that there is no “safe” population. They are seeing the need for some sensible control of our current insane gun policy.

Immigration reform has long been ignored or used as a divisive political issue. Yet immigration is a reality in our society and how we respond will address social and economic justice. Our economy is dependent on the labor of these “non-recognized” people whom we so often overlook and treat as non-entities. This is a complex and international issue that demands compassion and leadership to resolve.

Finally, as the U.S. prepares to withdraw combat forces from Afghanistan it is imperative that we look closely at addressing and eliminating the root causes of war. All war has the possibility of going nuclear, either by intent or mistake. In a world that remains wired for instantaneous nuclear annihilation stemming from outmoded Cold War thinking, the time at long last has come to make real progress in abolishing these weapons.

The cost of war and the military-industrial complex to our society and world in lives, treasure, natural resources, brainpower, and missed opportunities is incomprehensible. The entire war economy demands a complete review as we face the finite fragile future of our planet. It is inaugural time time to inaugurate some key necessary changes.

Robert F. Dodge, M.D., serves on the boards of the Nuclear Age Peace Foundation, Beyond War, Physicians for Social Responsibility Los Angeles, and Citizens for Peaceful Resolutions, and writes for PeaceVoice.

7 comments for “New Hope for a Second Term”