Pundits talk about presidential Inaugurals as celebrations of democracy, but the pomp and circumstance attended by Marine guards and punctuated by cannon fire carry an implicit message of intimidation that is closer to monarchy than a people’s government, writes Joe Lauria.

Americans fought an eight-year war of liberation against not only the most powerful monarchy on Earth in 1775 but against monarchy itself. Yet once the dust settled and it was time to write a Constitution, compromises left America a legacy of monarchy now gone from most of Europe.

Among the kingly powers still residing in the American presidency are the pardon, the veto and the title Commander-in-Chief. Add to that list the Inaugural celebration we are witnessing in Washington, D.C. None of this has any place in a democracy. 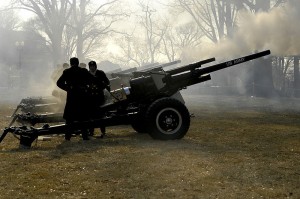 Unlike in Europe, whose time for empire has come and gone, the United States combines the practical power of head of government with the symbolic power of head of state. It is a frightening combination.

But that is the point: to instill fear. It is part of how rulers rule, how leaders manage populations. A mere mortal, albeit one with mortal power over other people’s lives, is transformed through ritual and ceremony into a super-human figure who is not to be messed with.

As the chief executive he holds in his hands the state’s monopoly on violence — both domestic and foreign. That fear of potential violence buffers an American president from criticism. It takes courage for someone — a cabinet official, a journalist or an ordinary citizen — to stand up to a president while he’s in power.

The threat of violence is hidden. It’s always there in the background if the foreground strategy fails: the obedience-inducing symbols of power. It all kicks off with the Inauguration. Any American president’s legitimacy — including Obama’s — should ideally rest on his performance alone, not his branding in ceremonies reminiscent of enthronements.

In a parliamentary system real power resides with the prime minister who is not glorified in ceremony, title and song. He is also more accountable to the people. A major screw-up and a vote of no confidence can bring a new government at any time.

If the people still need some parental-like figure ruling over them, better that person be stripped of political power — like the kings, queens and ceremonial presidents of Europe today — than the man and or woman who can still command armies in the field.

In a representative democracy we want our leaders to be as much like us as possible — not in the Sarah Palin sense of “dumb” as the average common denominator. No, smarter than the norm but remaining among us — not set apart.

A speech on the steps of the Capitol should be enough — especially for a second term. Tell us what you are going to do and then drive — or walk — down Pennsylvania Avenue and start doing it.

Joe Lauria is a veteran foreign-affairs journalist based at the U.N. since 1990. He has written for the Boston Globe, the London Daily Telegraph, the Johannesburg Star, the Montreal Gazette, the Wall Street Journal and other newspapers. He can be reached at joelauria@gmail.com .

← The Second Amendment’s History
New Hope for a Second Term →

3 comments for “The Troubling Message of Inaugurals”