Movie-goers across America can now see the hunt-for-bin-Laden film, “Zero Dark Thirty,” and its graphic portrayal of torture as a key element in that search. But the filmmakers distort the facts and ignore the reality that torture is illegal, immoral and dangerously ineffective, writes Marjorie Cohn.

First and foremost, it leaves the viewer with the erroneous impression that torture helped the CIA find bin Laden’s hiding place in Pakistan. Secondarily, it ignores both the illegality and immorality of using torture as an interrogation tool. 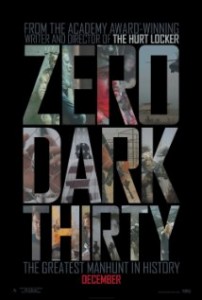 The thriller opens with the words “based on first-hand accounts of actual events.” After showing footage of the horrific 9/11 attacks, it moves into a graphic and lengthy depiction of torture. The detainee “Ammar” is subjected to waterboarding, stress positions, sleep deprivation, and confined in a small box.

Responding to the torture, he divulges the name of the courier who ultimately leads the CIA to bin Laden’s location and assassination. It may be good theater, but it is inaccurate and misleading.

The statement “based on first-hand accounts of actual events” is deceptive because it causes the viewer think the story is accurate. All it really means, however, is that the CIA provided Hollywood with information about events depicted in the movie.

Acting CIA Director Michael Morell wrote a letter to the Senate Select Committee on Intelligence in which he admitted the CIA engaged extensively with the filmmakers. After receiving his letter, Sens. John McCain, Dianne Feinstein and Carl Levin requested information and documents related to the CIA’s cooperation.

The senators sent a letter to Morell saying they were “concerned by the film’s clear implication that information obtained during or after the use of the CIA’s coercive interrogation techniques played a critical role in locating Usama Bin Laden (UBL).”

They noted, “the film depicts CIA officers repeatedly torturing detainees. The film then credits CIA detainees subjected to coercive interrogation techniques as providing critical lead information on the courier that led to the UBL compound.” They state categorically: “this information is incorrect.”

The letter explains that after a review of more than six million pages of CIA records, Feinstein and Levin made the following determination: “The CIA did not first learn about the existence of the UBL courier from CIA detainees subjected to coercive interrogation techniques. Nor did the CIA discover the courier’s identity from CIA detainees subjected to coercive techniques.

“No CIA detainee reported on the courier’s full name or specific whereabouts, and no detainee identified the compound in which UBL was hidden. Instead, the CIA learned of the existence of the courier, his true name, and location through means unrelated to the CIA detention and interrogation program.”

In a speech on the Senate floor, McCain declared, “It was not torture, or cruel, inhuman, and degrading treatment of detainees that got us the major leads that ultimately enabled our intelligence community to find Osama bin Laden.”

McCain added: “In fact, not only did the use of ‘enhanced interrogation techniques’ on Khalid Sheik Mohammed not provide us with the key leads on bin Laden’s courier, Abu Ahmed; it actually produced false and misleading information.”

Many high-level interrogators, including Glenn L. Carle, Ali Soufan and Matthew Alexander, report that torture is actually ineffective and often interferes with the securing of actual intelligence. A 2006 study by the National Defense Intelligence College concluded that traditional, rapport-building interrogation techniques are very effective even with the most recalcitrant detainees, but coercive tactics create resistance.

Moreover, torture is counter-productive. An interrogator serving in Afghanistan told Forbes, “I cannot even count the amount of times that I personally have come face to face with detainees, who told me they were primarily motivated to do what they did, because of hearing that we committed torture. Torture committed by Americans in the past continues to kill Americans today.”

Torture is also illegal and immoral important points that are ignored in Zero Dark Thirty. After witnessing the savage beating of a detainee at the beginning of the film, the beautiful heroine “Maya” says “I’m fine.”

As he’s leaving Pakistan, Maya’s colleague Dan tells her, “You gotta be real careful with the detainees now. Politics are changing and you don’t want to be the last one holding the dog collar when the oversight committee comes.”

Torture is illegal in all circumstances. The Convention Against Torture and Other Cruel, Inhuman or Degrading Treatment or Punishment, a treaty the United States ratified which makes it part of U.S. law, states unequivocally: “No exceptional circumstances whatsoever, whether a state of war or a threat of war, internal political instability or any other public emergency, may be invoked as a justification of torture.”

The prohibition of torture is absolute and unequivocal. Torture is never lawful.

Yet despite copious evidence of widespread torture and abuse during the Bush administration, and the Constitution’s mandate that the President enforce the laws, President Obama refuses to hold the Bush officials and lawyers accountable for their law breaking.

Granting impunity to the torturers combined with propaganda films like Zero Dark Thirty, which may well win multiple Oscars, dilutes any meaningful public opposition to our government’s cruel interrogation techniques.

Armed with full and accurate information, we must engage in an honest discourse about torture and abuse, and hold those who commit those illegal acts fully accountable.

Marjorie Cohn is a professor at Thomas Jefferson School of Law. Her most recent book is The United States and Torture: Interrogation, Incarceration, and Abuse.

5 comments for “The Dark Side of ‘Zero Dark Thirty’”