With the “fiscal cliff” partly solved and partly delayed, President Obama may now turn his attention to filling his national security team for the second term, including whether to face down neocon opposition to Nebraska Republican Chuck Hagel for Defense Secretary, as ex-CIA analyst Ray McGovern notes.

Absent from the discussion about whether former Sen. Chuck Hagel would make a good Secretary of Defense is any focus on lessons learned from personal factors like combat in war, as well as loyalty to the President.

As I was grousing about this, my eye caught a name on a rubbing I made from the Vietnam Veterans Memorial wall: “Edward S. Krukowski.” Many years ago, Ed and I studied Russian and were in the ROTC together. 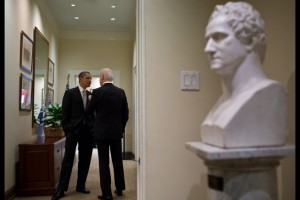 Capt. Edward Krukowski, USAF, was flying a C-123 on a resupply mission in Vietnam when shot down on Oct. 24, 1964, six days short of his 26th birthday, leaving a wife and three small children. Ed had planned for the worst, leaving a request to be buried at Arlington Cemetery within view of the grave of President John Kennedy.

What Ed probably did not know is that Kennedy had ordered a phased withdrawal of virtually all U.S. troops from Vietnam a year before Ed and his entire crew went down.

Six weeks before Kennedy himself was killed, he defied his chief military and civilian advisers and issued National Security Action Memorandum Number 263 (Oct. 11, 1963), ordering the Pentagon to prepare to withdraw 1,000 troops by the end of 1963, and the bulk of the rest by the end of 1965. It was a dicey thing for a president to defy his top military advisers on war. Yet he got away with it – for six weeks, anyway.

Kennedy had the strong personal loyalty of his Defense Secretary, Robert McNamara, who had learned not to be intimidated by the hawkish generals Kennedy inherited. These generals had already discredited themselves by their blasÃ© attitude toward nuclear war during the missile crisis in Cuba in October 1962. They were the same Joint Chiefs whom then-Under Secretary of State George Ball called “a sewer of deceit.”

Their hyperbolic warnings that the fall of Vietnam would mean Communist control of Southeast Asia fell on appropriately skeptical ears. In May 1962, Kennedy ordered them to develop a contingency troop-withdrawal plan; they “slow-rolled” the project for more than a year.

During his first year in office, President Barack Obama encountered similar insubordination when the Pentagon pigeonholed his order to serve up options (plural) on Afghanistan. In the end, they came up with one singularly ineffective and costly option, namely, the “surge” of 40,000 (or “only” 30,000, if that’s all they could get) additional troops – that was the brainchild of Generals David Petraeus and Stanley McChrystal.

Mr. Obama had tasked then-Secretary of Defense Robert Gates to give him options (plural). But Gates’s assessment of the relative power of the generals vis-Ã -vis the President persuaded him that Mr. Obama didn’t even have to be “slow rolled.” He could be simply ignored.

The contrast between Robert McNamara and Robert Gates raises a key question with respect to what role Mr. Hagel would play, if our trial-balloon-fan President were to summon the courage to actually nominate him to head the Pentagon.

Chuck Hagel is his own man. There is even some chance his example might prompt Mr. Obama to be more his own man. Clearly,  the President needs all the backbone strengthening he can get, if he is to stick to his plan to exit Afghanistan and face down supporters of hard-right Israelis itching for war on Iran.

Mr. Obama’s better-late-than-never, Kennedy-like decision to pull almost all U.S. troops from Afghanistan by 2014 has already drawn fire from neocon pundits like Max Boot, who argue for keeping major U.S. bases near key cities like Kandahar, the birthplace of the Taliban and the most populous Afghan city after Kabul.

Who remembers Gen. McChrystal’s cringe-worthy promise to pacify Marja, some 100 miles from Kandahar, as a dress rehearsal for taking Kandahar itself? In early February 2010, he proudly told The New York Times, “We’ve got a government in a box, ready to roll in.” Right.

Mr. Obama will be offered more hare-brained schemes like that. Mr. Hagel would likely recognize them for what they are. He has “been there, done that,” having volunteered for Vietnam, with two Purple Hearts to prove it.

Mr. Hagel has explained his overall attitude in these words: “Committing a nation to war, asking our men and women to make sacrifices that no other Americans will ever be asked to make, is a deadly serious decision. War is not an abstraction.”

Mr. Hagel would be the first Secretary of Defense in 30 years with lessons learned from direct combat experience. About time, I would say. No more Ed Krukowskis sacrificed in fool’s errands, please.

Ray McGovern is a former Army officer and a 27-year veteran of the CIA’s analysis division whose responsibilities included preparing and delivering the President’ Daily Brief. His email is rrmcgovern@gmail.com. [This article originally appeared at the Baltimore Sun.]

5 comments for “What Hagel Could Give Obama”