As the American Right loses credibility from the Tea Party to the neocons there’s a chance for the reassertion of rationality, a new respect for empirical evidence and disdain for propaganda. Perhaps most importantly is the recognition of the grave threat from climate change, says Winslow Myers.

Because the United States is the wealthiest nation on the planet, Americans have the luxury of being proactive in ensuring their future security. But the path to that security looks very different from the way it did even a few years ago.

A primary example of this transformed security context is the realization that there is only one atmosphere surrounding the earth. Unless all nations make a concerted effort to convert to sources of clean energy, global mean temperatures will continue to rise and cause undesirable extremes of weather. 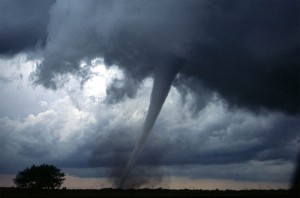 Strategic competition between superpowers like Russia, China and the U.S. becomes irrelevant to the larger crisis of fossil fuel use and carbon dioxide emissions from all countries. The violence of storms in one country may be intensified by the environmental policies of another country, and vice-versa.

Fossil fuel corporations, more powerful than many national governments, must be pressured from taking more oil or coal out of the ground even though they have the technical means and the capital to do so. While entrenched interests are resistant to such painful change, countries like Germany are providing a model of how it can be done, having relinquished nuclear power and moved successfully toward hybridized alternatives like solar, wind, tidal, and low-head hydro power,indeed, a far more secure mix than a huge vulnerable nuclear reactor or coal-fired, smoke-belching plant.

Where would the capital come from for an American conversion away from fossil fuels?  How about our profligate and useless nuclear weapons renewal program? Nuclear weapons take their place as one more environmental challenge.

Scientists have computer-modeled the possibility that even a small nuclear war using only a fraction of the weapons available would loft enough soot into the atmosphere to cause a worldwide shutdown of agriculture for a decade. This accelerated climate event would be as much a death sentence for the planet as all-out nuclear war between two superpowers.

Established U.S. policy assumes that deterrence needs to be maintained against the Russian nuclear arsenal, even though the Cold War has been over for a generation. Deterrence theory also breaks down against a nuclear attack by terrorist extremists, who could simply bring a device into a country by stealth. A potent combination of obsolete deterrence strategy, the profitability of new submarines, missiles, and drones, and the assumption that no other nation is in a position to police the world, rationalizes the momentum of the American weapons industry.

The assumption that all U.S. ordnance will be perpetually fail-safe is the ultimate folly. We are rushing headlong toward a cliff that makes a molehill of the so-called “fiscal cliff.”

Conditions on the macro level are replicated at smaller scales. The massacre of children in Newtown has renewed discussion about which societal models most effectively protect the innocent. Some have suggested that safety lies in more rather than fewer weapons, a deterrence model similar to that which has been vainly pursued on the international level.

Arming everyone to the teeth, whether individuals or nations, is a devil’s bargain yielding only greater and greater insecurity, especially given the possibility of accident or misinterpretation. It has now been a half-century since we learned where this model inevitably leads. During the Cuban missile crisis, the United States and the Soviet Union came within a hair’s breadth of total global annihilation.

Presidents Gorbachev and Reagan saw the light when they met in Reykjavik in 1986 and considered the total elimination of nuclear arsenals on both sides. The momentum of global arms manufacture rushes us past such milestones of visionary common sense into a future that, unless we risk citizen-supported change, looks increasingly foreboding.

Even if the U.S. and Russia could agree to disarm to their last warhead, the planet needs to address the tensions between newer members of the nuclear club like India and Pakistan, who have yet to learn the inescapable lesson of the Cuban missile crisis. Perhaps the quickest way for them to learn it is by our setting an example.

The only force sufficient to counter this momentum is citizen awareness and action, building relationships across illusory divides with people in other nations on the basis of shared security concerns. The divides are illusory because all of us on the planet face the same challenges together. This reality is powerful enough to overcome the fear and enemy-imaging that has restrained global peace building in the past.

Americans, who are blessed with so much in spite of our present economic woes, shouldn’t find it so hard to imagine how deeply grateful people in places like Iran would feel if we built down our nuclear weapons programs, setting aside the resulting peace dividend toward a massive conversion to sustainable energy sources and meeting worldwide needs for medicine, clean water, nourishing food, and shelter.

As such initiatives came to be appreciated, terrorism would inevitably die a natural death. The scarcity of resources that is expected to be the cause of future wars would be addressed preemptively. Given the greater risks of continuing on our present course, this fundamental change of direction is worth the gamble. If you agree, write your representative.

Winslow Myers leads seminars on the challenges of personal and global change, is the author of Living Beyond War: A Citizen’s Guide, serves on the Advisory Board of the War Preventive Initiative, is a member of the Rotarian Action Group for Peace, and writes for PeaceVoice.

← What Hagel Could Give Obama
Should Afghanistan Be Partitioned? →