Exclusive: A number of Americans on the Right and Left embrace fantasies about fighting some glorious revolution in the future, requiring them to maintain arsenals of weapons today, even if the cost of their violent illusions is the brutal murder of children at school, at play or in the home, writes Robert Parry.

The 20 school kids slaughtered in their classrooms in Connecticut and many other children who die of gun violence every day are a sacrifice that some Americans feel is “worth it” for their personal dreams of waging some violent revolution sometime in the future, whether from the Right or the Left.

Some of these revolutionary dreamers may have watched movies like “Red Dawn” too many times and are obsessed with absurd plots about North Korea, Cuba or maybe the United Nations invading and conquering the United States. Others look forward to the collapse of the world economy, followed by some armed uprising of the dispossessed. 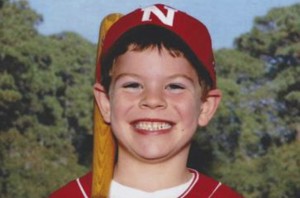 Jack Pinto, 6, one of the victims of the Newtown, Connecticut, shooting rampage.

So, to stay armed in anticipation of such eventualities, elements of the Right and the Left are saying, in effect, that the ongoing butchery of American children and thousands of other innocents each year is just part of the price for “liberty” or “justice” or whatever.

Thus, whenever anyone suggests that perhaps some commonsense gun control might at least begin ratcheting down the numbers of victims, there is an angry reaction from believers in this romanticized idea of armed revolution. You’re accused of wanting to disarm the American people and put them under the boot of totalitarianism.

Especially on the Right, there also has been a cottage industry of concocting a false or misleading history about the Second Amendment, with quotes from Framers cherry-picked or simply fabricated to suggest that the men who wrote the Constitution and the Bill of Rights wanted an armed population to do battle with the U.S. government. [See, for instance, Steven Krulik’s compilation of such apocryphal references.]

The actual history indicates nearly the opposite, that the Framers were deeply concerned about the violent disorder that surfaced in Shays’ Rebellion when poor veterans and farmers rose up in western Massachusetts. The revolt was subdued by an ad hoc army assembled by wealthy Bostonians in early 1787, just weeks before the Constitutional Convention convened in Philadelphia.

George Washington, who followed Shays’ Rebellion closely, was alarmed by the spreading unrest, thinking it might validate the predictions of the European powers that the new United States would collapse amid internal strife, pitting the rich against the poor and regions against one another.

Any review of Washington’s writings in the years after the Revolution show him fretting about civil and economic chaos and the dangers they posed to the country’s hard-won independence. [See Consortiumnews.com’s “The Right’s Second Amendment Lies” and Robert Parry’s America’s Stolen Narrative.]

It is within the context of these concerns that the writing of the U.S. Constitution must be understood. The new governing document marked a thorough rejection of the states’-rights-oriented Articles of Confederation in favor a strong central government that could hold the nation together and address its economic needs.

With Washington presiding at the convention, his fellow Virginian James Madison provided the architecture for the new system, which so radically altered the relationship between the central government and the states that a powerful opposition arose, called the Anti-Federalists, to block ratification of the Constitution.

To save his masterwork, Madison joined a sales campaign known as the Federalist Papers in which he not only extolled the economic advantages of the new system but sought to finesse the ardent opposition by downplaying how much power he had bestowed on the central government.

Though Madison did not believe a Bill of Rights was necessary, he agreed to add one to win over other skeptics. In effect, the first ten amendments represented concessions to both individual citizens and the states.

Some additions were mostly cosmetic like the Tenth Amendment which simply stated that powers not granted to the central government in the Constitution remained with the people and the states, a rather meaningless point since the Constitution included very expansive powers for federal authorities.

The Second Amendment could be viewed as mostly a concession to the states, ensuring the right of a “free State” to arm its citizens for the purpose of maintaining “security” through “a well-regulated Militia.” Until 2008, U.S. Supreme Courts interpreted the Second Amendment’s “right to bear arms” as a collective, not an individual, right.

After all, if the Framers had intended the Second Amendment to be what some Americans now wish it to be an invitation for citizens to take up arms against the U.S. government you would think that the preamble would be written quite differently.

Instead of “A well-regulated Militia being necessary to the security of a free State,” the authors would have written something like, “An armed population necessary to wage war against an oppressive federal government or an unjust social order, the right to the people to keep and bear arms shall not be infringed.”

But logic and the historical record make clear that the Framers were not encouraging domestic disorder. Indeed, one of the key goals of the Constitution was to create a governing structure that would permit peaceful change by balancing the popular will as expressed through the House of Representatives, elected every two years against avoidance of hasty changes assured by the Senate with six-year terms and (originally) selected by state legislatures.

Though recognizing the need to respond to popular sentiments and thus to avert crises like Shays’ Rebellion, the key Framers were mostly well-to-do white men, many possessing African slaves and/or land on the frontier inhabited by Native Americans. These American aristocrats opposed radical challenges to the post-Revolution social order.

So, the Constitution defined armed rebellion against the United States as “treason” and promised federal assistance to quell domestic violence in the states. The Constitution also tacitly endorsed the abhorrent practice of slavery and even mandated the return of runaway slaves.

The concept of the Second Amendment’s “well-regulated Militia” was primarily intended to maintain “security” in the states, not undermine it. There were fears of more uprisings by poor whites or, even more frightening to many Framers, slave revolts or frontier attacks by Native Americans.

Thus, with the Second Amendment in place in 1791, President George Washington and the Second Congress turned to strengthening the state militias through the Militia Acts of 1792. Their urgency related to a new anti-tax revolt in western Pennsylvania, known as the Whiskey Rebellion.

Once the militias were strong enough and with negotiations with the rebels failing President Washington personally led a combined force of state militias to put down the Whiskey Rebellion. The rebels were scattered and order was finally restored.

In other words, today’s reinvention of the Second Amendment as some ultra-radical idea of the Framers to empower the population to violently challenge the established order and overthrow the government amounts to revisionist history, not the actual intent of the Framers.

Though this revisionist history is more vocally promoted by today’s Right, it has a significant following on the Left, too.

With the Right, the idea of armed insurrection is mostly embraced by whites angry about federal action in defense of minorities, such as outlawing racial segregation and addressing the legacy of white supremacy. The Right’s dream of revolution usually involves fighting government bureaucrats who arrive backed by black helicopters and intent on trampling the “liberties” of “real Americans.”

But the romantic notion of armed revolution perhaps has been more insidious on the Left, because it has caused some progressives to essentially remove themselves from practical politics altogether, to wait for some inevitable collapse of the System, followed by a popular insurrection that somehow brings Utopia to the world.

Though the Right has similar true-believers although with a very different desired outcome the Right has continued to engage in regular politics. It has built a vast media infrastructure that conveys right-wing messaging to Americans in all corners of the country; it has well-funded “think tanks” to develop cutting-edge propaganda; and it has organized itself within the Republican Party, now having a substantial say over who the GOP nominates for state and federal office.

So, the Right has combined its armed militancy with political activism on the national, state and local levels. By contrast, the American Left mostly shut down its media outreach operations in the 1970s; it largely switched to “organizing” around local issues, rather than national ones; and it rejected opportunities to compete for a larger say within the Democratic Party, in favor of investing time and money in minor third parties.

As the Left opted for these approaches and its political relevance declined some leftists drifted away from any practical thinking. Instead of getting serious about achieving meaningful reforms, some got lost in fantastic conspiracy theories or were absorbed by dreams of some glorious revolution in the future.

For these reasons, whenever anyone suggests that the daily carnage from gun violence demands some commonsense gun laws like banning assault rifles and magazines with more than 10 rounds the proposals are met with such fury that most politicians, journalists or academics retreat.

Yet, while those who embrace these revolutionary fantasies may consider the price of the 20 dead kids in Newtown or the thousands of others who die each year “worth it,” the question now is whether most Americans will continue to acquiesce to that judgment.

← Learning from Endless War
Hagel and the New McCarthyism →

15 comments for “The Price of Revolutionary Illusions”