Some Christian churches observe a near-month-long preparation for Christmas known as the Advent season, but its origins are not Bible-based and not well understood. Advent traces back to the Middle Ages when some Christians thought Jesus’s return was imminent, explains Rev. Howard Bess.

We are in the middle of Advent season though few Christians can explain what it is all about. Some may know that it is a time of preparation for the celebration of the birth of Jesus, the Christ of the Faith. Seasonal music abounds and there is a lot of candle lighting.

But an in-depth understanding of Advent escapes most believers. The meaning of the season gets swallowed up by Santa Claus and the commercialization of Christmas. 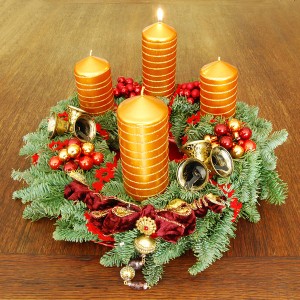 An Advent wreath with candles lit on the first Sunday of the Advent season. (Photo credit: Micha L. Rieser)

Growing up as a Baptist in a small Midwestern town, I never heard anything about Advent season. It was never mentioned at the First Baptist Church, and there were not many Catholics or Lutherans around my home town. I vaguely knew that some Christian churches had ceremonies around Christmas time that went beyond singing songs and hearing a sermon.

But I did not receive my first exposure to the Christian liturgical year until I was attending a Methodist seminary, where I learned that most Christian churches divide the year into four seasons, and that the first season was called Advent. It begins on the fourth Sunday before Christmas. Thus began my journey to understand and appreciate Advent.

A season called Advent is not mentioned in the Bible. In fact, Advent does not appear in church history until the 8th Century when it surfaced as a response to a massive wave of anticipation of the return of Jesus Christ to establish a righteous kingdom on earth. People started feverishly to prepare themselves to greet the Messiah King who would rule the world. But Jesus did not return to earth in the 8th Century.

In reading church history, Christians have shown themselves to have an addiction to the return of Jesus. Countless times over my years of being pastor, I have been approached by a parishioner with a message for me: Jesus is returning. Usually the parishioner had a date certain. Yet, each time, for some reason, Jesus did not return.

It is not easy for a pastor to explain to faithful members of the congregation that Jesus is not coming back on their time schedule. But the problem persists. People keep trying to read Bible mythology as history. People were in error in the 8th Century and have been in error every century since.

Reading Bible mythology as history and turning it into predictions is folly. Write this down in bold type: Jesus is not returning to earth to set up a righteous kingdom. Does this erase Advent as a valid tool in the cultivating of the spiritual life? I think not!

In thinking about the word advent, it is obvious that the root word advent connects to our English word adventure. So, Advent is a season of the year when we open our eyes, ears and hearts to going on an adventure with the intruding God of the Bible.

I very much want to serve a God of love, joy and peace. The special attraction of the Advent season to me is going on a journey with an adventuresome God.

The Rev. Howard Bess is a retired American Baptist minister, who lives in retirement in Palmer, Alaska. His email address is hdbs@mtaonline.net.

9 comments for “The History of the Advent Season”