The insertion of false narratives is a powerful way to control populations, a technique that today’s American Right has perfected in persuading much of the population that global warming is a hoax and “the market’s invisible hand” is real,  a dilemma of the human condition addressed by poet Phil Rockstroh.

As we draw near to the Winter Solstice and the days shorten, one’s thoughts are drawn inward. Bright lights, fragrant spices and sprigs of evergreen are appropriated to induce one back into the eros of life. Otherwise, daylight-bereft, in the half-light between the land of the living and the domain of the shades of memory, one can become stranded in impersonal despair or toxic nostalgia.

Cultures, throughout human history, have believed the realms of the living and the realms of spirits are drawn near to each other during Fall and Early Winter. Modern humankind dismisses the notion, yet, within, we feel unease. Enter: the manic compensations of the consumer state — the compulsion to avoid reflection by constant motion and contrived bedazzlement — the proffering of kitsch rather than the bestowing of meaning. 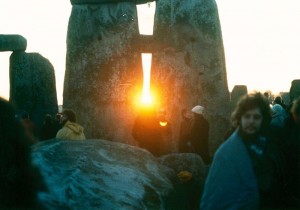 Sunrise on the winter solstice at Stonehenge in Great Britain in the mid-1980s. (Photo credit: Mark Grant)

Personally, I would not be the least bit offended by manger scenes in public spaces, if equal space would be allotted to other religious sects. For example, let’s saynaked, dancing, cavorting pagans enacting rituals involving the Winter Solstice.

I’m not troubled by the mythology of others. It would be propitious to our soul-starved, public space-bereft culture to possess vivid agoras offering eros and a glimpse of salvation. I would be inclined to engaged in more frequent shopping outings if such a social milieu was extant.

Somehow, shuffling around the mall, chewing on an over-sized Cinnabon, does not serve as a balm to my soul.

Enmeshed, as we are, in the meta-storyline of a nearly all-encompassing media hologram, whether spun by the mainstream media or when slogging through a psychologically miasmic swamp of FaceBook postings, tweets and text messages, it is become increasingly difficult to listen to silenceto allow one’s innate nature to rise from one’s vital center to the fore of one’s being.

Therefore, the criteria of the imagination becomes concretized. For example, in the insular, cracked brain cosmology of febrile, media fantasies, there exists something called a War on Christmas, fought, with Weapons of Mass Destruction supplied by Syria on the chimerical landscape of a Financial Cliff — a struggle being waged, exclusively, in the minds of those who believe in a phantasmal “Invisible Hand of the Free Market” — but who deny the decades of scrupulously gathered data and rigorously proofed evidence of global Climate Change

To subject oneself to the dim, collective imaginings of the current day political and media culture is to navigate through realms of hackneyed fantasy — to make one’s way through storylines that are not only estranged from the daily exigencies of everyday life of the citizenry that they are tasked to serve, but are wholly removed from the rhythms and resonances of life on earth itself.

Throughout the ages, groups of elitists — generally self-serving — have dictated the criteria of the lives of the multitudes. One of the most potent means of maintaining power is to create the stories that dwell within the individual, as palpably present as any living thing, and often as deleterious as a parasite.

This is why it is imperative for an individual to create and tell his/her unique tale. History bears witness to the results of humankind’s collective refusal: a howling hellscape of war and economic exploitation. Any nitwit can seek happiness, and, generally, does. But it requires a cultivated courage of the heart to create comedy and beauty out of the material of constant sorrow.

Do not shrink from the task of dwelling in the truth of your unique being and living your way into the attendant tales spun by your awakened heart. There exist no neutral ground in the realm of soul-making. To demure from your calling — to cede your own power to the forces of unreasonable power — is the stuff of tragedy.

If the dead in their graves could speak as a chorus, they would admonish the living: Resist. Create. Let no other living thing define how you live out your days.

First start with an honest awareness of the world that exists around you, and the factors that create the criteria that you exist in, day by day. Then, in ways large and small, work to subvert the present order. Engage in an activism of your choice i.e., political, artistic, and social. That should keep you busy for a while.

In reality, the “Financial Cliff” is the abyss that yawns before the human soul regarding late capitalism in general. To proceed forward, speed unchecked and common sense unheeded, into the present paradigm, the human race careens, closer and closer, toward the abyss engendered by perpetual war, exploitation, and ecocide.

Withal, there are austerity cuts that would prove propitious. For example, to cut off the parasites of the One Percent from the means to continue the carnage resultant from the crime spree known as so-called free-market capitalism.

If there was such a thing as a Google Map of the soul, and if you were to perform a search for the term “free market,” its location would be revealed to be an array of shoddy structures, an architecture of nada e.g., payday loan outlets, jack shacks, Wall Street firms, meth labs and crack houses, K Street Lobby operations, pawn shops, Chick-Fil-A, Papa John’s Pizza and Cracker Barrel establishments tottering on the precipice of a howling chasm with a Climate Change-strengthened hurricane approaching.

We can use drastic austerity measures in the area of greenhouse gases, media consolidation, Pentagon budgets, CEO salaries and bonuses, deforestation, overfishing of the world’s oceans, junk food production and the concomitant expansion of the hindquarters of American consumers.

Otherwise, nature introduces eon’s old austerity measures. Recently, Sandy dropped by the U.S. Mid-Atlantic and Northeast regions for a little meet-and-greet. The conversation, between humankind and catastrophic natural phenomenon, tends to be a bit one-sided. Accordingly, Sandy delivered a simple message: Continue on your present path and your trip’s itinerary will involve a very short excursion in the present direction and then a long, uncomfortable journey downward.

A few years back, my wife and I were driving through south Texas, through a sprawling section of Big Agra cattle ranches, livestock holding pens and massive slaughter houses — mechanized killing zones that bore the quaint name, “cattle country.” In reality, the area was an archipelago of misery, cruelty and death.

The reek of curdled blood, dung, urine, and mortal terror was as thick as the seething clouds of proliferate black flies scudding the air of the area; their impact-exploded carcasses stippled our car windshield in a hideous, greasy smear of insectile exoskeletons and entrails. Have you heard this old joke? What is the last thing an insect sees when it collides with a windshield? Its asshole.

Regarding Climate Chaos, we, as a culture, have placed our own heads, collectively, in a rectal blindfold of self-deception. The mass production and consumption of animal flesh is the largest single factor in the creation of the rise of atmospheric greenhouse gasses responsible for climate chaos such as super-storm Sandy.

As I listen to climate change deniers, I feel like my brain is passing through some sort of parallel dimension comprised of interlinking rectal cavities. In short, the destruction of the ecosystem, and the degraded and declining criteria of our lives is the fate we have sown for ourselves, because, as a people, we continue to allow our lives to be ruled by the caprice of an infestation of fly-brained, elitist, rectal sphincters on two legs.

The Soul of the World’s tears are endless. And that is a fortunate thing. Because if the weeping ever ceased — the rage of all things wounded would rise. There are times, when I become one with my wounded heart, my soul snarls like an injured animal. The origin and key to the lexicon of my fury is as follows:

Though I live and breathe, I was beaten to death as a child devoured in the all-encompassing flames of my father’s napalm rage. At dinner, flickering on the screen of our portable, black-and-white television, I glimpsed the jungles of Southeast Asia being immolated by the U.S. military. My father would shout at the set, “People — they are so fucking stupid! So fucking stupid! And, boy, if you don’t shape up and get good grades, so you can hide out in college, they will send you to those jungles of death. Hear me, boy?”

“You told me you signed up for the AirBorne when you were seventeen, Dad. Were your grades that bad?”

“I’ll knock that smart mouth of yours into next week, boy.”

“Be sure to get my ears too So that, next week, they will be able to hear an answer to my question.”

“I warned you, smart ass.” And the blows rained down of me.

Periodically, I have had dreams wherein I came upon two blonde children, brother and sister, who I was informed by an unseen narrator, died in a fire in 1965. In the dreams, I seek to comfort them to bestow a healing balm on their pain and confusion. On our last encounter, my wife and I embraced them, and our beings melded together, as the four of us dissolved into the arms of eternity seemingly, the devouring flames of personal happenstance had been transformed into a warming hearth of a universal and deathless love.

“So all things hobble together for the only possible.” ,Samuel Beckett, from his novel, Murphy

It is impossible to go it alone. Wounded, awkward, gripped by fears of our feeblenessall who live are all maimed and hobbled in some way. Yet our incompleteness saves us from the fate of sterile perfection, from a heart-negating completeness. Because of my incomplete nature, I need your collaboration. Because of my unsure gait, I need your assistance, so I do not fall.

Providence has made me ugly so that I can endure being constantly wounded by beauty. I stumble over my thick tongue and you help me to the farther shore of my sentence. More and more, I find that I need to rest and take refuge within your song of bitter grace.

If my heart had not been shattered into ten thousand shards, you would not have stopped to gather me, arranged me anew, and stood me, voiceless in awe, before a chorus whose song was so piercing I felt as though, for a fleeting moment, I might become privy to a furtive memory borne of ever-present eternity.

Fortunately, you sealed my ears in beeswax and spared me the terrible beauty of the perfect music of the grave.  You love me as I falter plangent with banality, reeking of lost promise yet daring enough to risk the enduring grace of ungainly devotion.

Do not ask why a person paints, writes poems, makes music, dances, or protests. You might as well make inquiries to the cells of your skin as to why they, every moment of every day, are engaged in the process of regeneration.

Apropos, there is no call to go out in search of oneself, because what we do is who we are.