The prevailing view on Fox News is that everyone in America, regardless of his or her religious beliefs, must join in the lavish and lengthy celebration of the birth of Jesus or be accused of warring on Christmas. But the real assault on Jesus’s teaching comes from gross materialism, says Lawrence S. Wittner.

Although fundamentalist fanatics have been working for decades to turn the United States into a “Christian nation,” they have not had much success along these lines.

One reason for their failure is that religious minorities and non-believers have resisted. And another is probably that a large number of Americans want to preserve religious tolerance and avoid theocracy. But it might also reflect the fact that the United States is now firmly in the grip of a different religion: shopping. 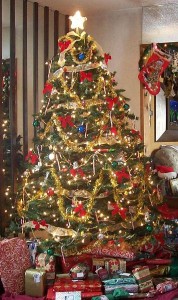 A Christmas tree surrounding by presents.

The frenzied participants were not starving, impoverished peasants or product-deprived refugees from communist nations but reasonably comfortable, middle-class Americans. Their desperation was not driven by hunger. They simply wanted … more!

And now that the nation enters its Christmas shopping spree — conveniently begun in November, to allow plenty of time for the practice — there will undoubtedly be lots more commodity fetishism. The shopping malls are already alive with the Christmas music designed to encourage purchases, while visions of rising sales figures dance through the heads of happy store managers.

All of this, of course, leads to complaints by traditional religious believers about the commercialization of Christmas. Of course, the bloviators on Fox News seek to blame the decline of religious feeling during the Christmas season upon liberal thought. But the hard reality is that Jesus in the manger or bleeding on the cross has less appeal to many Americans that do the latest cellphones and other commercial gadgetry.

Actually, despite the emphasis on purchases during the holidays, shopping is a year-round phenomenon in the United States. Children might not be able to read, write, add, or subtract, but they know a great deal about the latest consumer products.

Their parents and grandparents are thoroughly familiar with them as well. And why wouldn’t they be? A vast array of products is regularly featured on TV and radio programs, on roadside billboards, and in their newspapers and magazines.

In fact, commercial advertising is ubiquitous in the United States, with few Americans able to escape it. Even when people are not in their homes, commercial television programs — those shoddy, thought-free commodities developed to keep the ads from bumping together — run continuously in doctors’ waiting rooms, auto repair shops, elevators, train stations, hospitals, restaurants, airports, school cafeterias, bars, and taxis.

Furthermore, advertising is not designed to merely alert people to the availability of a product, but to make them want it. Commercial enterprises understand that, thanks to the influence of advertising, purchases will not be based upon need, but upon desire.

Advertising will stir dissatisfaction with what people already have and create a craving for something else. And this is a very promising route to sales. Naturally, then, U.S. corporations engulf Americans in advertising. It’s an excellent investment, and produces legions of eager, even desperate shoppers.

Only a very rare American politician would be willing to stand up against the resulting steamroller of consumerism. Imagine the political future of a candidate for public office who said:

“There has been enough talk of economic growth and competition as the solutions to our problems. Our real challenges as Americans are to limit our consumption to what we genuinely need, to share with others who are less fortunate than we are, and to halt the plunder of our planet’s resources and the destruction of our environment.”

I suspect that she or he would not get very far. Nor, despite the similarity of this approach to the core values of religious faiths, is it popular among the mainstream U.S. churches. Yes, they encourage small-scale charitable ventures. But they do little to challenge the consumerist ethos.

Indeed, the most active and rapidly growing among the churches — the fundamentalist and evangelical denominations — have rallied behind political candidates championing unbridled capitalism and the prerogatives of wealth. “Drill baby, drill” seems far more popular among them than the Golden Rule.

Ironically, then, by not opposing the corporate cultivation of untrammeled greed among Americans, the churches have left the door open to the triumph of America’s new religion — not liberal secularism, but shopping.

15 comments for “Worshipping Materialism at Christmas”