Exclusive: The investigation of the firebombing of the upscale Montreal home of ex-Israeli intelligence officer Ari Ben-Menashe is looking at the possibility the accelerant was more sophisticated than available to common criminals, reports Robert Parry.

The Montreal arson squad is investigating whether a military-grade accelerant was used in the firebombing that consumed the luxury home of ex-Israeli intelligence officer Ari Ben-Menashe on Sunday night.

Late Wednesday afternoon, police investigators digging through the scorched rubble took samples from what was left of the downstairs rug and sofa where the incendiary device was believed to have landed, touching off the blaze that spread rapidly forcing Ben-Menashe and a woman in the house to flee. 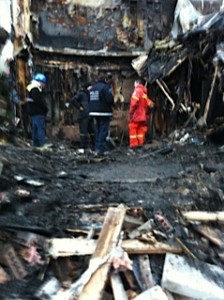 Police also are believed to have identified a suspect seen running away after the fire began, but the police had not yet found the individual. Several houses in the upscale neighborhood are equipped with security cameras, which may have recorded video of the attack.

The woman in Ben-Menashe’s house, who asked not to be identified for reasons of security, told me she attempted to extinguish the fire with water but to no avail. As it continued to spread, she escaped through the front door. Ben-Menashe said he made his escape through a rear entrance.

Police are reportedly hoping the detailed samples of the accelerant may help them determine who was behind the attack. The arson squad’s initial assessment is said to be that the  flammable agent was beyond the sort of accelerant used by common criminals.

If the substance is indeed military-grade, a detailed analysis of its composition could indicate the manufacturer and provide other clues to what might be a larger plot, according to people familiar with the investigation.

In an interview on Wednesday, Ben-Menashe, 61, said he did not want to speculate about who was behind the attack. However, he noted that he has accumulated a number of enemies over the years after going public with information about his work for Israeli intelligence from 1977 to 1989 and exposing secret dealings by the Reagan administration with Iran and Iraq.

In more recent years, as an international consultant often working in global hotspots, Ben-Menashe has been involved in other controversies, including a role blowing the whistle on a questionable 2010 business deal by Arthur Porter, who was then in charge of overseeing Canadian intelligence services and who ran the McGill University Health Centre.

Porter resigned both posts, and the scandal has tarnished the government of Prime Minister Stephen Harper, who let Porter serve in a highly sensitive position as chair of the Security Intelligence Review Committee from Sept. 3, 2008, until his resignation on Nov. 10, 2011. That position gave Porter access to not only sensitive secrets of Canadian intelligence but of American intelligence as well.

Ben-Menashe’s knowledge of the Porter’s ethically questionable conduct began in June 2010 when Porter paid Ben-Menashe’s consulting firm $200,000 to help broker a $120 million development grant for Porter’s homeland of Sierra Leone. However, Ben-Menashe learned that the grant was to be funneled through an outfit known as the Africa Infrastructure Group, which Porter owned, and the deal was using a questionable Swiss bank.

After discovering these irregularities, Ben-Menashe said he returned the $200,000 fee and terminated the grant proposal. According to Ben-Menashe, Porter blamed him for sinking the scheme, which was later exposed by Canada’s National Post precipitating Porter’s fall from grace. Last month, McGill University also sued Porter for $317,154.

So, the nasty dispute with Porter is one of the avenues of inquiry being followed by Montreal police. But Ben-Menashe also has been the target of the Israeli government for divulging state secrets in the early 1990s and he remains a bÃªte noire in some Israeli circles to this day.

Ben-Menashe began talking with journalists and congressional investigators after he was arrested in the United States in 1989 on charges of selling military equipment to Iran and was disowned by his Israeli superiors. That was when I first met Ben-Menashe.

As a correspondent for Newsweek magazine, I interviewed him in a federal prison in Lower Manhattan as he was awaiting trial. He said that because Israel was not protecting him, he felt he had no choice but to tell the truth and reveal secrets about Israel’s work with the Reagan administration in the 1980s, including then-hidden aspects of the Iran-Contra scandal.

When I checked with Israel about Ben-Menashe, government spokesmen insisted that he was an “impostor” who had never worked for Israeli intelligence. But I then obtained official Israeli letters of reference describing his decade-long work within a branch of Israeli military intelligence, the External Relations Department of the Israel Defence Forces.

After that, Israeli officials changed their story, labeling him “a low-level translator,” another false claim that was picked up by some American journalists with close ties to Israel. The letters revealed that Ben-Menashe had served in “key positions” handling “complex and sensitive assignments.”

In fall 1990, a New York jury acquitted Ben-Menashe after concluding that he indeed was working on official Israeli business in his transactions with Iran. But the Israeli government continued to work aggressively to discredit Ben-Menashe and destroy his reputation.

Much of Ben-Menashe’s complicated past and present are now elements that Montreal police must shift through — along with the wreckage of Ben-Menashe’s home — as they try to solve last Sunday’s mystery of a terror fire-bombing.