Exclusive: President Obama’s reelection perhaps even more than his first victory marks a potential shift in the political and economic structure of the United States, as the old white ruling elite loses its grip. There is even a chance for revolutionary change, says Morgan Strong.

Near dawn on April 19, 1775, as British regulars confronted American militiamen at Lexington Green in Massachusetts, a shot rang out, leading to a brief skirmish that killed eight Americans and touched off the Revolutionary War. The moment has gone down in history as “the shot heard round the world.”

But the reelection of Barack Obama, the nation’s first African-American president, may mark the beginning of another American Revolution, one in which the nation’s white oligarchy and its mostly white electoral supporters face a demographic change that is altering the power relationships of the United States. 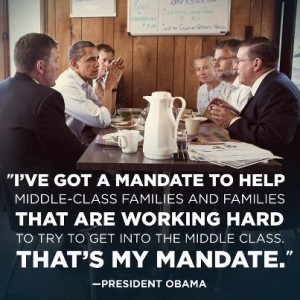 A graphic of President Barack Obama meeting with a group of Americans with his quote claiming a “mandate” to help average citizens. (Photo credit: barackobama.com)

Obama’s reelection defeating Mitt Romney, a wealthy white investor of life-long privilege was driven by non-white voters of African, Hispanic and Asian descent as well as by unmarried women, gays and young whites who have embraced the nation’s multicultural future.

Though some skeptics dispute the significance of this electoral shift arguing that Obama is just one more lackey of the nation’s wealthy elites and is too cautious to do much the election’s outcome offers a rare opportunity for a major shift in America’s power relationships. The biracial son of a single mother who needed food stamps is clearly not what the white oligarchy had in mind for U.S. president in 2013.

Perhaps the oligarchy and its apologists could slough off Obama’s first term as a quirk in history, the result of his unique personal skills and the fact that Wall Street had just led the nation into the worst economic crisis since the Great Depression. But a second term, especially with unemployment still high and people frustrated by political gridlock in Washington, was harder to explain.

After all, Romney was the overwhelming choice of rich white men and many white men of lesser means, especially in the South. Until the stunning results of Election Night, Romney and his well-to-do supporters were envisioning years of Republican dominance, making life easier for corporate chieftains and the investor class while slashing programs for the poor, retirees and middle class.

After all, that was the way things traditionally were in America, with a few exceptions like the period of the New Deal after Wall Street similarly drove the nation into an economic crisis in the 1930s. Through most of its history, America has been ruled by an oligarchy. So why should things change now?

Since the nation’s start, wealthy, well-positioned men (and a few women) have controlled the political process and ruled through their surrogates in elective office. That is how so-called “revisionist” historians describe U.S. history, taking a less romanticized version of our past and present. They cut to the quick, offering a dispassionate, less heroic version of the American experience by analyzing causes and effects, decisions and evidence.

G. William Domhoff, in his book Who Rules America, described the political process of the U.S. as one held captive by a small percentile of the population whose position and wealth have allowed them to control the ordinary citizen’s political and economic condition, a classic oligarchy.

Domhoff first published his “revisionist” thesis in 1967 and added new editions in 1983, 1998, 2002 and 2006. He demonstrated the interrelationship, between U.S. presidents and their extended families, to show the close ties of many national leaders from the country’s inception. These leaders served their own and the oligarchy’s interests, maintaining the status quo that is most to their advantage, politically and economically.

Looking at U.S. history through this lens, we see that the American Revolution was begun as a rejection of the burden of taxation by the elite of early American society. George Washington, perhaps America’s greatest hero, was more a corporation than an individual. He was the largest landowner in the country and owned the largest whisky distillery.

Similar interests were shared by nearly all the Founding Fathers. John Hancock owned a fleet of ships. Benjamin Franklin was a businessman publishing newspapers and books. Thomas Jefferson owned a vast plantation. They all found the Crown’s taxation excessive.

These principals of the Revolution agitated successfully among the American populace for a break with the British King. The King himself, an absolute monarch, made a great deal of money through conquest, colonization and taxation. Taxation of all colonies was necessary to support his wars and his expansion of territory.

There was no noble purpose to British conquest; it was only a matter of creating wealth and power. Among America’s revolutionary leaders, the prevailing opinion was better to keep the money at home, according to the “revisionist” historians. With victory over the British, America’s revolutionary elite seized and held power through a wealthy oligarchy of its own.

Domhoff also described the close personal and family ties that developed among many past presidents. There were a number of intermarriages among the oligarchy to ensure continuation of its dominance of American politics and economy. The Roosevelts, originally an American colonial family of Dutch descent, are an example.

The rich coalesced into a social class that developed institutions through which the children of its members were socialized into a permanent upper class. Members of this class still control many of the major corporations, the primary mechanism for generating and holding wealth in this country.

In this reality, the ordinary American had less power through the electoral process than was understood (or claimed in U.S. civics classes). The ability of the electorate to force changes that benefited the masses and to create a more equitable society was severely limited by the elite’s resistance.

Voting does not necessarily make government responsive to the will of the majority when the control of the government is actually in the hands of an elite that will not permit its primacy to be undone or its wealth diminished.

That is perhaps until now. In recent decades, American society has changed with non-whites making up a larger and larger percentage of the electorate, and many from this group do not want to continue the old structure favoring the wealthy white oligarchy. The influence of the have not’s is growing. The white, complacent majority is no longer the deciding factor in U.S. elections.

There has been a great deal said about the brilliance of President Obama’s electoral campaign, but there also were other important factors: the changing electorate, a desire for real change, and a rejection of what is seen by many as an obstructionist elite that has grown obscenely rich while making the lives of the majority more difficult and even untenable.

No candidate in modern U.S. politics represented this elite class more fully than did Mitt Romney. In a private meeting with rich supporters last May, Romney disparaged the 47 percent of Americans who don’t pay federal income tax (although most are assessed payroll taxes and others in the group are retirees and soldiers in combat zones).

But Romney made clear that he and his class view these Americans (and others who receive government assistance) as society’s parasites. His 47 percent comment was a revealingly thoughtless remark by a member of the oligarchy, albeit a remark that correctly expressed a frustration with the changing demographics, which are contrary to the elite’s interests.

Thus, Romney’s defeat creates an opportunity for the country to change direction in a revolutionary way, responding to the frustrated dreams of the embattled middle class, the poor and the young. But there remain many forces resisting any new political or economic paradigm and there are doubts that the often conciliatory Obama can be an agent for fundamental change.

As for Romney, after his defeat, many supporters abandoned him like a sinking ship, clamoring down ropes like rats and distancing themselves from his incompetence as a candidate. For his part, Romney reprised his 47 percent comment by telling financial backers that he lost because Obama provided “gifts” to favored demographic groups and then turned them out to vote.

Though an insult to those voters, Romney’s remark reflected something real: the fact that the U.S. political/economic paradigm is shifting away from the old status quo which for generations has  insured that well-to-do whites could confidently expect to receive most of the nation’s bounty.

Morgan Strong was a professor of Middle Eastern and American history, and was an advisor to CBS News’ “60 Minutes” on the Middle East.

17 comments for “A Shot for a Possible New World”