Republican presidential nominee Mitt Romney has made building the TransCanada pipeline a centerpiece of his campaign, with President Obama mostly trying to finesse the issue. But a treehouse blockade of the pipeline through Texas reflects a determined resistance by environmentalists, writes William Boardman.

Officially, it seems, the Tar Sands Blockade was supposed to be over in mid-October when the New York Times, having ignored the story for weeks, announced that it was a “last-ditch bid” to block a section of the pipeline through Texas.

But Tar Sands Blockade, a grassroots coalition of Texans opposed to the Keystone XL pipeline, is still there, still occupying the treehouse blockade it mounted on Sept. 24, still trying to hold up construction of TransCanada’s $7 billion pipelinethat will bring hot, toxic tar sands oil sludge from Canada for global markets. 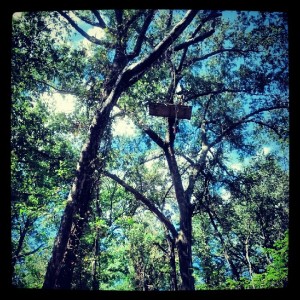 A treehouse that is part of the “treehouse blockade” of the TransCanada pipeline through Texas. (Photo credit: TarSandsBlockade’s Facebook page)

Two more people joined the tree-sitters this week, bringing the number of tree blockades to four, as blockaders maneuver in response to TransCanada’s effort to build around the original blockade. One of the new tree-sitters is Cat Ripley, 20, a veteran pipeline protestor who last year helped stop another TransCanada pipeline near Portland, Oregon, when the builders withdrew their permit application.

Presidential candidate Mitt Romney and President Barack Obama both support the Keystone XL pipeline, and both claim that it will contribute to the chimera of American energy independence.

While both candidates are also all but silent on climate change, former U.S. Army chief of staff Gen. Gordon Sullivan and the other ten retired officers of the CNA think tank’s Military Advisory Board say unambiguously: “Climate change is and must be recognized as a threat to our national security.”

Sometimes lost in the details is the basic argument about tapping the Alberta tar sands in Canada, since tar sands oil is much more toxic than oil from previously exploited reserves. Because the Alberta reserve is vast, it’s a significant hedge against oil shortages and has drawn heavy investment from the oil industry, including PetroChina.

Because tar sands oil is so toxic, environmentalists warn against it as James Hansen, director of the NASA Goddard Institute for Space Studies, wrote in the New York Times last May: “If Canada proceeds, and we do nothing, it will be game over for the climate.”

TransCanada pipeline construction sites offer clear confrontation points in the oil/climate struggle, with resistance growing wherever pipelines have threatened to go lately, whether Nebraska or British Columbia, Vermont or Texas, where the Tar Sands Blockade’s action has entered its second month.

Two days after the Times virtual “obituary” on Tar Sands Blockade, more than 50 supporters swarmed the construction site and later posted video of their actions and security reactions. Oct. 15 was the biggest action of the blockade to date, with protesters outnumbering security officers roughly 3-1.

The main purpose of the action was to re-supply the nine tree-sitters, but protesters also disrupted construction for the day, as they ran around the site and some locked themselves to equipment. Dozens more demonstrated against TransCanada from nearby public land, and there were solidarity rallies in Austin and Denton, Texas, as well as Washington, DC, New York City, and San Francisco.

Security officers made some eight arrests and tackled a 70-year-old Cherokee woman, but police violence did not reach earlier levels when officers abused two protesters, a man and a woman, using chokeholds, pepper spray, and tasers, while the pair was chained helplessly to a backhoe.

The Oct. 15 action came after TransCanada had clamped down on the area with police-state tactics, as reported by Firedoglake: “Enlisted off-duty police officers are intimidating, harassing and arresting just about anyone they think is trespassing, even if those people happen to be on property they own. And, officers who are acting as armed henchmen for TransCanada have arrested three journalists in the past twenty-four hours for simply being there to report on resistance to the pipeline construction.”

One of those arrested on Oct. 10 was Times reporter Dan Frosch, whose dismissive Oct. 13 story minimized the size and significance of the confrontation while heavily quoting TransCanada spokesmen without balancing views. For example, Frosch quoted the company view that “the company was making sure that work sites were safe, ‘even for those who are breaking the law and trespassing on these locations’,” as if there was no opposing point of view.

The Times reporter also reported, as if it were true, the TransCanada claim “that the company was respectful of those people whose land it needed,” when the opposite is easily documented. And for the self-described “paper of record,” Frosch chose to quote only two resigned and passive landowners, rather than any who have been actively resisting on site or in court.

Frosch omitted any mention of his own arrest or the arrest of the photographer with him or the arrests of three other journalists, none of whom were apparently charged. He did mention the arrest of Daryl Hannah and others, but not their excessive bail or over-charging by local authorities.

After its initial sanction of extreme violence against the protesters, TransCanada has apparently managed to keep its security officers relatively restrained except for the occasional roughing-up or hog-tying. The multi-billion dollar Canadian company’s more recent actions have included numerous court suits against landowners and protesters, including a Strategic Lawsuit Against Public Participation, known as a SLAPP suit, a form of litigation that has been limited by statute in 28 states other than Texas.

The SLAPP suit is a notorious form of legal bad faith, designed not so much to be won (or even taken to trial) by the plaintiffs, but rather to intimidate, silence, censor and exhaust the resources of opponents who are typically, as with environmental groups like the Tar Sands Blockade, incapable of matching the resources of a multi-billion-dollar corporation.

The failure of the state of Texas to protect Texas landowners has aroused considerable anger and resentment, as expressed by Edwin Tullos in a letter to the Dallas Morning News: “As a landowner in rural Texas, I find use of the law by a company to override landowners’ rights for a profit venture extremely disconcerting.

“The interpreting of the law by state level government officials in this matter demonstrates their intent to use it to void any law protecting private landowners from profit oriented consortiums including foreign companies — as this one is. How secure are we in our homes when the state–not federal–orders our homes seized to assure the profit of their donors?”

TransCanada has maintained low-level pressure on the tree-sitters, with round-the-clock security waiting to arrest anyone who might come down and anyone who might try to bring supplies. The company has also maintained floodlights on the treehouses all night, powered by noisy generators, making sleep difficult.

For some reason, TransCanada turned off the lights and generators the night of Oct. 24, according to retired Col. Ann Wright who visited with the tree-sitters without incident.

That same day a Louisiana woman chained herself to the gate of a TransCanada equipment yard, preventing trucks and other heavy equipment from going to work until sheriff’s deputies cut her chains with bolt-cutters and arrested  her. Cherri Foytlin, mother of six and wife of an oil-field worker, posted her intentions in advance in a video and on her blog, Bridge The Gulf, acting in solidarity with an another anti-pipeline movement in Canada.

In British Columbia in western Canada, massive and widespread opposition has emerged to try to stop another pipeline intended to bring molten tar sands oil from central Alberta to an oil tanker port in Vancouver on the Puget Sound. On Oct. 22, thousands of people took to the streets of the provincial capital Victoria to make their views known to the provincial legislature and Premier Christy Clark.

Two days later the protest spread across the province as more than 60 local communities joined hands in solidarity against the pipeline plan, with significant media attention

An elected official, Texas Land Commissioner Jerry Patterson, called the blockaders names in an Oct. 16 op-ed piece that begins, inaccurately: “I’ve recently learned that a bunch of out-of-state, self-appointed ‘eco-anarchists’ think they know better than Texans and have arrived to save us from ourselves. They’re trying to block the Keystone Pipeline Gulf Coast Project, the pipeline that’s under construction in East Texas that will create thousands of jobs and lessen our dependence on foreign oil.”

This provoked a number of hostile letters and comments in opposition in the Dallas Morning News  and elsewhere around the state. The Tar Sands Blockade is a native Texan effort with supporters from other states.

National mainstream media coverage, like the Times, has been spotty and behind the curve: on Oct. 15, the Washington Post “discovered” the three-week old civil disobedience in the treetops; on Oct. 17 an Associated Press report said “a battle is brewing over an unlikely project, an oil pipeline;” and on Oct. 19 the Los Angeles Times reported on 78-year-old Eleanor Fairchild’s Oct. 4 arrest (with actress Daryl Hannah) to protest the pipeline’s damage to her farm and livelihood.

Regional mainstream media coverage has been somewhat more attentive, with the Fort Worth Weekly running a lengthy, balanced overview piece on Oct. 17. Similarly, regional TV has aired some coverage, but the Tar Sands Blockade of TransCanada’s pipeline has apparently not yet been covered by any national TV news network or program.