When some Americans act cavalierly about voting for a President, they ignore a profound responsibility to the world to ensure that the steadiest hand possible is next to the nuclear button. The 50th anniversary of the Cuban Missile Crisis should be a reminder, says Robert F. Dodge.

This week’s final presidential debate saw both candidates contemplate the greatest threat we face as the world quietly marked the 50th anniversary of the Cuban missile crisis. During those 12 days, 50 years ago, the world came closer to intentional nuclear annihilation than ever before or since. Yet neither candidate articulated the fact that by their very existence nuclear weapons pose the greatest threat to our survival.

By not mentioning the threat posed by global nuclear stockpiles in excess of 20,000 weapons, of which the U.S. and Russia control over 90 percent, everyone ignored the armed elephant in the room. We worry that Iran may be able to develop a single weapon at some future date totally oblivious to the number of times that the world has narrowly averted disaster from accidental and misread information since the 1962 missile crisis. 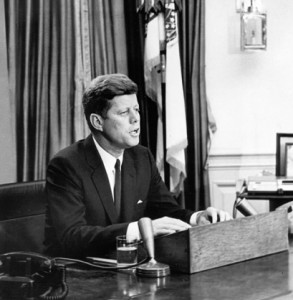 It is a matter of sheer luck that we sit here today terrified of a future nuclear Iran, disregarding the reality that each day is one day closer to intentional or accidental nuclear war. Probability experts conclude that such a catastrophe is more likely every day, not less.

Since we choose to own and maintain these arsenals, it is our democratic duty to contemplate how the world and civilization as we know it would end as a result of nuclear war.

This could come from the effects of nuclear famine stemming from the use of a relatively small percentage of global arsenals causing prompt global climate disruption that cuts food production worldwide and could kill more than a billion people. Alternatively, the effects of a so-called “nuclear winter” resulting from a full-scale nuclear attack would even more disastrously end life as we know it.

So what will we do about the greatest threat we face? Polls show that the people have decided. A majority of Americans and indeed citizens around the world say they want all nuclear weapons abolished. Society pays the price and faces the risk every day of these massive stockpiles and the bloated military budgets that support them and the wars we fight.

And part of the price we pay comes from the competition for precious resources both natural and financial fueling the very conflict around the world that leads to war in the first place. So how will we address this greatest threat? It is not enough to eliminate these stockpiles alone.

We have the international institutions and diplomatic skills, models and best practices today to resolve conflict without war. What is needed is the collective will and leadership to take this stand. The future of the planet depends on it. The choice is ours.

Robert F. Dodge, M.D. is a family physician practicing in Ventura, California. He is co-chairman of Citizens for Peaceful Resolutions (www.c-p-r.net). He sits on the Boards of Physicians for Social Responsibility Los Angeles (www.psrla.org) where he is also a Peace and Security Ambassador and Beyond War (www.beyondwar.org) where he heads the Nuclear Weapons Abolition Team.  In addition he sits on the PSR National Security Committee.

6 comments for “Presidential Elections and Armageddon”