The pundits say America’s economic angst will trump worries about war in the Nov. 6 election. However, as Americans learned a decade ago, careless foreign policies can have disastrous consequences, a lesson that ex-CIA analyst Paul R. Pillar also traces back one and two centuries.

As this year’s presidential campaign turns to debates about certain foreign conflicts and controversies with the potential for sucking the United States into war, here is an anniversary-based fact that does not seem to have received notice, certainly nothing like the Cuban missile crisis did this month upon its semicentennial.

The presidents of the United States who were elected 200 and 100 years ago both led the nation into war. Both did so despite earlier indications of personal hesitation and reservation in doing so. 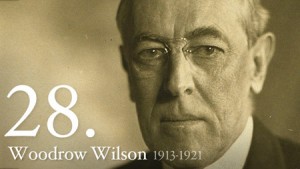 President Woodrow Wilson, the 28th President of the United States

The United States entered war with Britain during the final year of James Madison’s first term. The impetus for war came principally from congressional war hawks from the West and South such as Henry Clay and John C. Calhoun.

When Madison sent to Congress in June 1812 what became known as his war message, it did not explicitly ask for a declaration of war. Instead it only listed the maritime and other grievances that the nation had against the British. Congress did declare a war, “Mr. Madison’s war”, in which Madison would become the only U.S. president to be chased out of the White House by foreign troops.

A century later, as the European powers sank into the carnage of World War I, President Woodrow Wilson said to his aide Colonel House, “Madison and I are the only Princeton men that have become presidents. The circumstances of 1812 and now run parallel. I sincerely hope they will not go further.”

Wilson was elected to a second term in 1916 aided by the slogan, “He kept us out of war.” But only a few months later he asked for and received a congressional declaration of war. The United States was on the winning side of that war, but mismanagement of the aftermath set the stage for another ghastly European war two decades later.

Notwithstanding the many differences, there are some parallels between the circumstances of a century and two centuries ago and those of today. Let us sincerely hope the parallels will not go further.

14 comments for “Stumbling into Disastrous Wars”