The idea of arming a favored side in a civil war has become popular among U.S. policymakers chastened by the disastrous Iraq War, but there are grave dangers in that approach, too, especially the uncertainty of who might get the weapons and how they might be used, says the Independent Institute’s Ivan Eland.

We are regularly told by interventionists, whether they be U.S. government employees or neoconservative government wannabes, that the United States can readily determine who is friendly and who is not in remote civil wars in the developing world.

The first basic rule in any war, whether it be a conventional or counterinsurgency war, is to know who is on your team and who is not. To the uninitiated, this might seem like an easy task. And in a conventional war, in which both sides wear distinctive uniforms, it is much easier than in a counterinsurgency conflict, in which the enemy wears no specific uniform or mark of designation and the enemy’s strategy is to strike and then melt back into the general population. 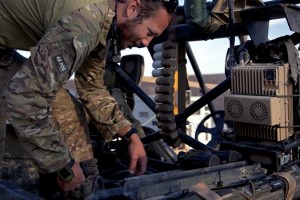 In Afghanistan’s Farah province, a coalition force member prepares his vehicle to conduct an operation in Khak-E-Safed on Oct. 20, 2012. Afghan National Security Forces increasingly have been taking the lead in these security operations. (U.S. Marine Corps photo by Sgt. Pete Thibodeau)

In Afghanistan, the Taliban guerrillas actually put on their enemy’s uniforms, those of the Afghan military, and try to kill Afghan soldiers or their international allies. This problem of “green-on-blue” attacks has been well publicized recently.

U.S. training of Afghan soldiers now has been significantly impaired because of U.S. suspicion of Afghan forces. The U.S. military commanders in Afghanistan regularly tell us that most such green-on-blue attackers are not Taliban infiltrators but disgruntled Afghan soldiers. But statistics in war are often manipulated, and those commanders have a great incentive to minimize the lethal problem of guerrilla infiltration in the Afghan security forces’ ranks.

The U.S. government has proven that it can’t even vet government organizations it is assisting, let alone individual soldiers. Since 9/11, the U.S. has given tens of billions of dollars in aid to Pakistan, which has an intelligence agency, or parts thereof, that is clearly aiding the Afghan Taliban enemy.

And the U.S. government still is not getting it: this is the same Pakistani intelligence agency that, in the 1980s, gave most of the weapons donated by the U.S. to fight the Soviets in Afghanistan to the most radical Islamist guerrillas, thus spawning al-Qaeda.

This lesson, that during a chaotic brushfire war, it is hard to make sure weapons don’t get into the hands of the wrong, dangerous people, has not only been lost on the U.S. government, but even more so on Mitt Romney and his neoconservative foreign policy advisers.

As if the Obama administration’s encouraging Turkey, Qatar and Saudi Arabia to send small arms to the Syrian rebels, by helping those countries vet the Syrian groups that get the weapons, weren’t bad enough, the high-testosterone Romney crowd wants to up the ante by sending heavy arms, such as hand-held anti-tank and anti-aircraft weapons, through these countries to the insurgents.

The problem with this potentially disastrous proposal became apparent when it was discovered that Syrian Islamists are receiving the lion’s share of the small arms already sent. So much for U.S. intelligence’s ability to vet arms recipients during an anarchic civil war.

All we need is radical Islamists with an ability to shoot down civilian airliners or use hand-held anti-tank weapons on buildings, energy facilities or other key infrastructure. New video exists of the first use of heat-seeking, shoulder-fired anti-aircraft weapons by Syrian rebels.

Thus, radical Islamists could already have this ability, because huge quantities of such hand-held weapons were reportedly in Muammar Gaddafi’s weapons storehouses in Libya. Unfortunately, these weapons were “liberated” along with the country when a U.S.-led coalition overthrew the Gaddafi government.

Predictably, given the tribal schisms in Libya, these heavy weapons may very well have fallen into the hands of the many militias that fought Gaddafi in that civil war and are now destabilizing the country and killing U.S. diplomats.

Some of these Libyan heavy weapons also may have migrated to Syria via the black market or other means, and they certainly would arrive there if a future President Romney provided them directly to Syrian rebels to overthrow the Syrian government. Apparently, the Romney neocons haven’t learned that overthrowing dictators doesn’t necessarily lead to positive outcomes.

The case of Libya also shows that government interventionism usually requires more government meddling to “fix” problems with the initial foray. The U.S. government is now funding the creation of a Libyan commando unit to counter the tribal militias and Islamist radicals, such as those that assassinated the U.S. ambassador and other diplomats, which it unleashed by taking out Gaddafi.

Of course, the U.S. will need to vet recruits to the new commando force to make sure it is free of Islamist radicals. The New York Times quotes Frederic Wehrey, an expert on Libyan security, as noting, “Overall, it’s a sound strategy, but my concern is that in the vetting they make sure this doesn’t become a Trojan horse for the militias to come in.”

But given the poor past history of the U.S. vetting security forces in messy war zones, it may not be a sound strategy at all.

Ivan Eland is Director of the Center on Peace & Liberty at The Independent Institute. Dr. Eland has spent 15 years working for Congress on national security issues, including stints as an investigator for the House Foreign Affairs Committee and Principal Defense Analyst at the Congressional Budget Office. His books include Partitioning for Peace: An Exit Strategy for Iraq The Empire Has No Clothes: U.S. Foreign Policy Exposed, and Putting “Defense” Back into U.S. Defense Policy