Mitt Romney’s three debate performances in October 2012 have exposed his political cynicism, with the Republican candidate abandoning long-term positions in order to adopt more moderate ideas for the run-up to next month’s election.

Prior to the three presidential debates, Romney’s domestic positions resembled President Ronald Reagan’s retreat from governance, particularly on entitlements and such non-defense expenditures as education and energy. Like Reagan, Romney expressed the belief that government cannot provide the solution to any problem because government is the problem. But a new Romney emerged in the first presidential debate suggesting less radical policies on taxes and health care. 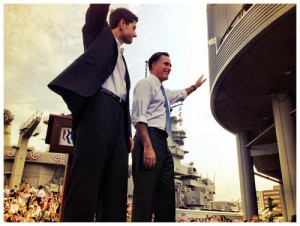 Then, on Monday night in the third debate, Romney abandoned his strident and bellicose ideas on foreign policy in order to echo President Barack Obama’s policies on Afghanistan, Iran, Libya and Syria.

Gone was the Romney who challenged the President’s withdrawal timeline for Afghanistan, who would have left more troops in Iraq, who considered Russia the nation’s most serious geostrategic threat, and who took issue with the negotiation of the new START treaty that halved the numbers of warheads and launchers in U.S. and Russian strategic inventories.

Romney also skirted around the tragic events in Benghazi last month dropping earlier attempts to blame the deaths of Ambassador Christopher Stevens and three other Americans on Obama’s supposed leadership failures. Presumably, Romney finally realizes that the intelligence community did a poor job of anticipating and then tracking the attack on the U.S. consulate.

There were other issues that were not raised in the debate that would have provided stark contrasts between the President and the challenger. Unlike Obama, who ended the practice of torture and abuse, Romney justified the use of waterboarding and his advisers have defended the “dark side” of enhanced interrogation techniques.

These advisers include Steve Bradbury, who headed the Justice Department’s Office of Legal Counsel in the Bush administration; Cully Stimson, who occupied a sensitive position in the Pentagon in the Bush administration; and such lawyers as Lee Casey and David Rivkin. Romney’s foreign policy advisers also include many of the neoconservatives who counseled President Bush, including John Bolton, Dan Senor, and Richard Williamson.

Unfortunately, Obama’s Attorney General, Eric Holder, recently gave a “distinguished service award” to Assistant U.S. Attorney John Durham, who refused to hold accountable anyone in the CIA for its brutal interrogations of detainees at secret prisons or “black sites” in connection with the Bush administration’s “war on terror” and the destruction of the infamous torture tapes.

In the debate, Romney avoided much of the Cold War language that he has used during the campaign season, but he still managed to be gratuitously aggressive toward China and Russia, which are important stakeholders in the diplomatic arena. Romney was blithely ignorant of the multilateral diplomacy needed to coordinate effective sanctions measures against Iran and Syria.

Romney’s shocking ignorance of the superiority and dominance of the U.S. Air Force and the Navy brought into question his support for an additional $2 trillion for the defense budget over the next ten years. Prior to the debate, Romney pledged to spend at least four percent of gross domestic product on defense, a bizarre way to plan for national defense.

Romney’s support for reopening the production line for the F-22 fighter plane would cost an additional $120 billion over the next ten years. Romney also wants a comprehensive national missile defense, which has never proven to be effective, as well as wider regional missile defenses in Eastern Europe, the Middle East and East Asia, a strategy that will contribute to greater regional disarray.

In an effort to establish credibility on key regional issues, Romney merely unveiled substantive ignorance. His allegation that Iran viewed Syria as an outlet to the sea ignored the 1,500 miles of coastline that Iran controls on the Persian Gulf.

His call for an end to Iranian oil imports into the United States ignored the ban on such imports that was put in place by President Ronald Reagan 25 years ago. His call for indicting Iran’s Prime Minister Mahmoud Ahmadinejad as a war criminal (because of his harsh criticism of Israel) was no more than an off-the-wall sound bite.

Until Monday night’s debate, Romney appeared to take a page out of John F. Kennedy’s inaugural address (“We will pay any price and bear any burden.”), a rhetorical flourish that helped lead the country into Vietnam.

Despite his suddenly conciliatory debate language, there is no reason to expect Romney to ameliorate his positions on national security, let alone his economic and social policies.

Melvin A. Goodman is a former CIA senior analyst and the author of the forthcoming National Insecurity: The Cost of American Militarism (City Lights Publishers, January 2013).