From Journalist Robert Parry: When my new book, America’s Stolen Narrative, returns from the printers in the next few days, I am setting aside the first 250 copies as part of a critical fundraiser to keep Consortiumnews.com afloat.

If you donate $100 or more now (or if you have in the recent past), I will send you an autographed, numbered copy as a thank-you gift for your tax-deductible donation.

(To donate by Visa/Mastercard, click here. To donate by check, make it out to Consortium for Independent Journalism [CIJ]; 2200 Wilson Blvd.; Suite 102-231; Arlington, VA 22201. To use PayPal, our account is named after our e-mail address: “consortnew @ aol.com”) 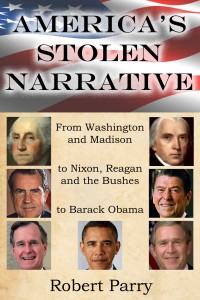 After your donation, just send me an e-mail at consortnew@aol.com telling me where to ship the book and prescribing any special inscription that you might like.

America’s Stolen Narrative is subtitled “From Washington and Madison to Nixon, Reagan and the Bushes to Obama.” The book’s opening chapter challenges the Tea Party misinformation about what the Framers were doing when they scrapped the states’-rights-oriented Articles of Confederation in favor of the Constitution.

The book also reveals new historical evidence showing how Richard Nixon’s “win-at-all-cost” political tactics became the playbook for the modern Republican Party and why Democrats have shied away from the hard work of accountability when faced with GOP crimes.

America’s Stolen Narrative rewrites the history of the latter years of the Vietnam War and explains why Nixon started his infamous “plumbers” unit, which later got caught at Watergate. The book then traces how Nixon’s playbook of dirty tricks was passed down through the years of Ronald Reagan, the Bushes and now the Tea Party.

The survival of Consortiumnews.com is also important to the book because it refers readers to original documents that exist at our Web site and, in many cases, no place else.

So please help us make sure that Consortiumnews.com, which began 17 years ago in the early days of the modern Internet, continues to uncover and explain important facts that shape American history.

Robert Parry broke many of the Iran-Contra stories in the 1980s for the Associated Press and Newsweek. He founded Consortiumnews.com in 1995 as the Internet’s first investigative magazine. He saw it as a way to combine modern technology and old-fashioned journalism to counter the increasing triviality of the mainstream U.S. news media

← Who’s the Real ‘Savage’?
The Danger of Wealth at the Top →