Islamophobes, including some involved in the ugly protests over an Islamic community center in Lower Manhattan, are now taking their case against the “savage” to billboards, urging greater U.S. support for Israel. But this message is designed to justify ethnic cleansing of the Palestinians, says Lawrence Davidson.

On Aug. 1, I posted a piece entitled History on a Billboard,  reporting on the placement, in the northern suburbs of New York City, of informational billboards with  maps of Palestine showing the steady growth of Israeli confiscated territory and the corresponding shrinkage of territory available to the indigenous Palestinians.

It also told the observer that “4.7 million Palestinians are classified by the UN as Refugees.” Although Zionists labeled the billboard as “anti-Semitic,” it was nothing of the kind. It was wholly informational, and completely accurate. 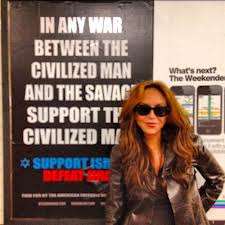 Pamela Geller and her billboard message.

As it turns out that informational effort is now part of a growing number of ads, signs and messages which collectively make up what I call the “billboard wars.” From San Francisco to Washington D.C. and New York City, both Zionists and pro-Palestinian groups have launched competing billboard efforts. This is going on mostly in publicly owned spaces because Zionist pressure often results in private billboard companies refusing to display pro-Palestinian messages.

Now, depending on how you want to read the message of the latest Zionist effort, this billboard-wars battleground has widened beyond the issue of Palestine to encompass a worldwide clash between the “civilized” and the “savage.” It is to be noted that this was the sort of language used by imperial colonizers, including the U.S. in its conquest of the American Indians, to favorably compare the colonizers to the indigenous populations they oppressed.

There is a Zionist group calling itself “American Freedom Defense Initiative” (AFDI) led by the infamous American Islamophobe Pamela Geller. This organization has produced a sign that reads, “In any war between the civilized man and the savage, support the civilized man. Support Israel. Defeat Jihad.”

Geller and AFDI aimed at placing this message on buses, subways and in other public venues but initially had difficulty because most transportation agencies saw it as discriminatory and provocative.  However, AFDI went to court and a federal judge found that their sign was an act of “free speech” protected by the First Amendment.

Therefore, in late September, those people of New York City who ride the buses and subways found Pamela Gelller’s message in their faces. Most, of course, will pay it little mind. Yet, we should not ignore it. It is part of a propaganda effort with potentially damaging consequences.

First, the AFDI and Geller juxtapose Israel on the one side and Jihadists on the other. My experience with over a thousand college students since 9/11 is that, for Americans, the term Jihadists means Al-Qaeda operatives. Most Americans do not associate this term with Palestinians.

And, believe it or not, while those associated with Al Qaeda have badmouthed Israel, they have yet to make war on that country. So, what are these Zionists talking about? Well, they are probably trying to broaden out the definition of a Jihadist to include not only Palestinians, but the entire Muslim world. That would be consistent with their Islamaphobe worldview.

In addition, they are saying that Israel represents “the civilized man” who has declared war on the same enemy that has made war on the United States. By asking Americans to “support Israel,” they are reinforcing the notion that the U.S. and Israel are allies.

Second, is the AFDI correct in telling us that Israel is the “civilized man?” Only in their own ahistorical fantasy. If you care to live in a world driven by the facts then Israel is rendered “the savage.” There is a lot of evidence for this.

On Oct. 10, the Harvard researcher Sara Roy gave a devastating critique of what Israel, backed up by the United States, has done in the Gaza Strip. Gaza, with its population approaching two million Palestinians, is now the most densely populated place on earth.  It is also the world’s most crowded open-air prison.

The Israeli blockade, illegal under international law, has slowly but surely destroyed the water supply, the sewage systems, the economic structure as a whole. The Israelis will tell you that Hamas, which governs Gaza, wants to destroy Israel. But that is only wishful thinking on the part of Hamas for they haven’t the ability to destroy anything.

Israel, on the other hand, wishes to destroy the Palestinian people and they do have that capacity. In Gaza, as well as the West Bank, they are slowly doing so. This is genocide in slow motion.

Sara Roy is an extremely knowledgeable American Jewish academic, but there are plenty of other sources, some of them Israeli, that will back up and expand on her critique. Here are a few of them:

Looking at the websites of these organizations reveals a litany of  ongoing  barbaric policies and actions perpetrated upon mostly unarmed Palestinians who have nothing at all to do with Jihadists. Indeed, to act as Israel does in this regard is to qualify a good number of its citizens (though not all) as savages. So to be true to the facts AFDI’s sign should really read as follows,

“In any war between savage one (Israel) and savage two (Al Qaeda), AFDI urges Americans to support savage number one. This is so even though Israel is not fighting Jihadists but rather genocidally destroying Palestinians.” That would be historically accurate, although it would put the situation in a distinctly different light than does Ms Geller’s propaganda.

The end of the billboard wars is not yet in sight. AFDI’s message is aimed at an American audience and thus can also be read as an attempt to promote Islamophobia just before a presidential election.

To counter the racist aspect of this message, the Council of American-Islamic Relations (CAIR) has placed 16-foot signs in the metro stations of Washington D.C. that are designed to “promote mutual understanding and challenge hate.” Their signs quote from the Quran: “show forgiveness, speak for justice and avoid the ignorant.”

The unfortunate thing is that, in these sorts of confrontations, Geller and her ilk have the odds on their side. This is because all the peace seekers are ultimately at the mercy of the violent and hateful extremists on both sides. However, in the U.S. the media will only tell you about the Jihadists.

Therefore, all it takes is one Al-Qaeda attack on an American target to send the CAIR message into oblivion. On the other hand, the Israeli government and its settler allies can act out the Zionist version of ethnic cleansing daily and the American public will rarely, if ever, hear about it.

The truth is there are fewer civilized men and women than we like to believe. The ones in power, regardless of the nation-state, only rarely behave in civilized ways. The bulk of the citizens either give support to or are indifferent toward their leader’s actions. The small remainder, who are indeed candidates for the category of civilized people, are left to struggle against a strong and consistent counter-current.  This is nowhere more true than in the state of Israel.

Such then, for all of us, is the heart of darkness.