Americans may see themselves as worldly cynics when it comes to political lying, observing that all politicians do it. But Mitt Romney is testing the limits with his ever-shifting positions and outright lies, notes Lawrence Davidson.

Mitt Romney might be the most brazen political liar since James Polk, who served as the 11th U.S. president (1845-1849) and lied through his teeth to Congress, to his cabinet, to the newspapers to get the country into a war with Mexico.

Of course, other presidents have lied to a similar end, for instance President Lyndon Johnson on the Vietnam War and President George W. Bush on the Iraq War. But Polk operated with the same audacious “lying is part of what I do” disposition that Mitt Romney does. 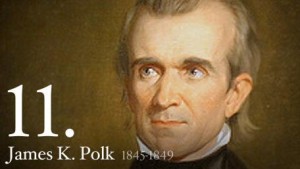 James Polk, the 11th President of the United States.

If one has any doubt about Mitt Romney’s mendacious temperament, the first presidential debate should have put it to rest. According to one analyst, Romney let loose with “27 myths in 38 minutes,”  finishing with a big grin after most of these prevarications. He produced trumped-up assertions, false statistics and wild exaggerations about taxes, energy independence, job creation, the deficit, Medicare, “Obamacare,” and military spending.

If the great Italian poet Dante Alighieri came back to life today and produced an updated list of lost souls for the “Inferno” section of his Divine Comedy, Romney would certainly earn a spot in the 8th rung of hell. That is where Dante placed, among others, the “falsifiers, those who attempted to alter things through lies or alchemy.” Their punishment was “based on horrible diseases such as rashes, dropsy, leprosy and consumption.”

By the way, there seems to be a suspicion that Romney  also cheated during the first debate. The debate rules say that the candidates cannot use “prepared notes.” However, a video of the debate shows that he had put what looks like a white piece of paper down on his podium, or maybe it was just his handkerchief. But who could believe that Romney might cheat?

The second presidential debate, scheduled for Oct. 16, will be partially about foreign policy. As a run-up to the moment, Romney gave a speech on foreign affairs. It should be kept in mind that between Oct. 8th and Oct. 16 he might completely change his positions. The man has such a flip-flop record that this is quite possible.

However, assuming he doesn’t do that, let’s take a look at just how truthful are his foreign policy statements:

As Robert Parry points out in Consortium News, Romney lied when he said Obama “has not signed one new free trade agreement in the past four years.” Obama has in fact signed three (South Korea, Panama and Columbia). Romney also lied when he said that Obama was “silent” during the suppression of demonstrations in Iran after the reelection of President Amadinejad. Obama spoke out on multiple occasions.

By the way, one might not approve of NAFTA-style trade agreements. I certainly don’t. But that does not make Romney’s lies about Obama’s actions acceptable.

Parry goes on to detail how Romney’s accusation that Obama’s foreign policy is “weak” is  groundless. After all, he is talking about the man who wages war in Afghanistan, helped bring down the dictatorship in Libya, and took down Osama bin Laden. Parry explains that Romney credits a lot of this to the U.S. military as if Obama had nothing to do with it.

Once more, Obama’s foreign policy has much about it that can be criticized. So, why do it through sheer falsehoods?  Perhaps because Romney actually has no problem with Obama’s actions, but does not want the public to associate them with the president.

Then there is Romney’s sudden embracing of a Palestinian state when just a few months ago he described such a goal as “almost unthinkable to accomplish.” At that time the reason he gave for his position was that Palestinians are not interested in peace. That was an outrageous lie.

It is hard to believe that he has now changed his mind. More likely he is attempting to preclude any charge that he has abandoned the search for peace, even as he asserts that Obama has not displayed leadership toward that same end.

When it comes to the Arab Spring, Obama allegedly missed “an historic opportunity to win new friends and share our values in the Middle East.” Who would these friends be? Those fighting against “evil tyrants and angry mobs who seek to harm us.”

This is so much gobbledygook. Most of the evil tyrants are our longstanding old friends and the angry mobs are the only hope for any governmental improvement.

Parry points out that the real difference between Romney and Obama is that Romney is much more the militarist. He has embraced neocon advisers, given carte blanche to Israel and verbally attacked Russia as “without question, our No. 1 geopolitical foe.”

All of this suggests that between Obama (who is certainly no saint and has plenty of blood on his own hands) and Romney, it is the latter who is more likely to get the nation into yet another war. As Juan Cole has observed, “wars and lots of other conflicts are not a foreign policy vision, they are a nightmare.”

So, does this serial falsification work? Can it actually help get a mythomanic elected president? It seems that the answer is yes.

According to a Pew Research Center poll taken after the first Obama-Romney debate,  “It’s official. Republican presidential nominee Mitt Romneyerased President Barack Obama’s lead.” According to a graph of the poll results Romney’s picked up five percentage points to come even with Obama. Sixty-four percent of voters “thought that Romney was more informative than President Obama.”

As a consequence the level of understanding of the average American about government policy on national issues such as  health care, energy independence, job creation, the deficit, military spending and even taxes is considerably lower than their average IQ. It is even worse when we get to foreign policy and its formulation.

Into the resulting knowledge vacuum come the misleading statements and assertions of politicians, so-called experts, and media spokesman of all descriptions. Fox News has made millions of dollars selling advertising that accompanies biased opinion passed off as fact.

In the end what the majority of Americans think they know about both domestic and foreign policy is based on media hear-say. Romney’s assertive and stylized lying fits well into this scenario. And his style also passes for strength and self-confidence.

Romney’s lying is so pervasive, so ever-present, that one starts to wonder if it is pathological. There is a mental illness characterized by habitual lying. It goes by the name of Pseudologia Fantastica. Here are some of the characteristics of this ailment:

a. The lies told “are not entirely improbable” and “upon confrontation, the teller can admit them to be untrue, even if unwillingly.” In other words, the liar is aware that he or she is lying.

b. The lies told cast the teller in a favorable light.

c. The tendency to lie is a long-lasting one and not the product of the moment. It reflects an innate trait of the personality.

Well, Romney fits this pattern when it comes to the first two traits. It is hard to tell about the third. We will have to await the in-depth biographies that are certain to hit the market in short order. However, there is no doubt that the man has an easy facility for lying. One doubts if it keeps him up at night.

In the last 50 years Americans have been walking off cliffs quite regularly, with the result that millions have been killed and maimed. They have done so in large part because they have a hard time knowing when they are being lied to, especially about foreign policy.

If the Pew poll cited above is any predictor, nothing is going to change any time soon. Elect Mitt Romney and that walk toward the cliff might turn into a run. Reelect Obama, and the cliff will probably remain our self-destructive destination, but perhaps the pace will be more measured.

4 comments for “Romney Tests the Limits on Lying”