Republican presidential nominee Mitt Romney put some space between himself and President Obama on Middle East policies by suggesting a return of U.S. troops to Iraq and drawing the “red line” for Iran around the fuzzy concept of nuclear “capability,” notes Adil E. Shamoo for Foreign Policy in Focus.

Mitt Romney’s foreign policy speech at the Virginia Military Institute, while trotted out as a major rejection of the current administration’s approach to the Middle East, mostly just rehashed President Obama’s policies, albeit with more hawkish bravado.

But Romney’s speech also included a host of faulty assumptions about Arabs and Muslims, indicating a potentially reckless misunderstanding of America’s relationship with the Muslim world. 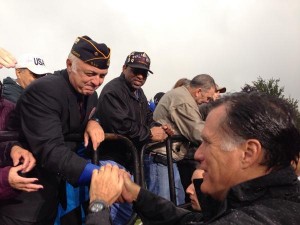 Romney purported to be shocked that some Muslims reacted violently against the United States after the release of a video insulting the Prophet Muhammad. Romney and his key foreign policy advisers apparently do not recognize that anti-American sentiment was already sky-high among Middle Eastern countries, with nearly all the polls indicating single-digit approval ratings of U.S. policy in the region.

The small group of genuinely extremist organizations like al-Qaeda takes advantage of this deeper reservoir of anti-Americanism in the broader society, a phenomenon that Romney and his advisers don’t seem to comprehend. Certainly, there’s a reason we do not see comparably violent demonstrations from Muslims in Europe or the United States.

I am glad that Mr. Romney recognizes that most Arabs are not violently anti-American and mourn the loss of the U.S. ambassador in Libya. Romney correctly states that there’s a regional “struggle between liberty and tyranny, justice and oppression, hope and despair.”

But Romney, like many conservatives and liberal interventionists, fails to recognize that U.S. foreign policy in the region has been a primary driver of this despair. We continue to support oppressive dictators in Saudi Arabia, Jordan, and Bahrain, in addition to our invasion of Iraq and our naked support for the Israeli occupation of Palestine.

Against all reason, Romney wants to send U.S. troops back to Iraq, where the unjustifiable U.S. invasion and occupation have already caused the deaths of hundreds of thousands of Iraqis and caused untold destruction. Never mind that the Iraqis did not want our troops then and certainly do not want them now. If Romney is worried about al-Qaeda in Iraq, maybe he should tell our “friends” in Saudi Arabia to stop bankrolling them.

On Afghanistan, whatever else he says, Romney’s policy is ostensibly synonymous with Obama’s: bring most of the troops home in 2014 as planned. In North Africa, Romney says he will put strings on U.S. aid to Egypt. This is not so different from the Obama administration’s policy, since U.S. aid to the civilian government of Egypt is so small ($0.25 billion) compared to U.S. aid to the Egyptian military ($1.25 billion).

Mr. Romney and his advisers would like us to send arms to the opposition in Syria, which he hopes will go to the right group. The Obama administration is already sending supplies and facilitating arms distribution from U.S. allies. However, we should not forget that the arms the United States sent to the Taliban in the 1980s are being used against us today.

Romney says the United States must “prevent [Iran] from acquiring nuclear weapons capability.” The only nuance he added to the Obama administration’s current policy is the word “capability.” Since the word is amorphous and can be interpreted many different ways, Romney’s policy is ambiguous at best, but also could be risky.

If Romney’s bar for capability is so low as to oppose Iran’s production of radioactive isotopes for medical use, it could well be that President Romney plans to go to war with Iran post-haste.

Finally, Romney endorsed the two-state solution in Israel-Palestine. This is exactly Obama’s policy but contrary to Romney’s own cynicism about the issue captured in the infamous “47-percent” video in May.

Most of Romney’s pronouncements on the Middle East are old and tired policies merely dressed up in hawkish new garb. The most disturbing element is the campaign’s utter misunderstanding of Arab history and the roots of anti-American sentiment in the region. Without understanding the present, how can Romney expect to shepherd in the future?

Adil E. Shamoo is an associate fellow of the Institute for Policy Studies, a senior analyst for Foreign Policy in Focus, and the author of Equal Worth When Humanity Will Have Peace. He can be reached at ashamoo@som.umaryland.edu.