Republican presidential nominee Mitt Romney made what was billed as a major foreign policy address, but the speech combined a shortage of specifics with specifics that were misleading or factually wrong, writes William Boardman.

Amidst the platitudes and vague generalities, the implied bellicosity and patriotic sentimentalities, there’s no sense of proportion, no sense of scale, little indication of priorities, and no bright, quotable line that crystallizes the candidate’s Romney Doctrine beyond a “vision for a freer, more prosperous, and more peaceful world.” 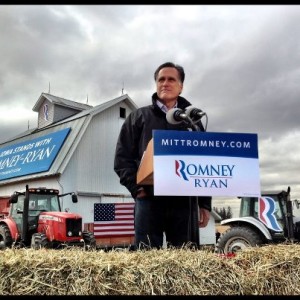 Romney opens his speech with generous praise for Gen. George Marshall, one of the more distinguished graduates of the Virginia Military Institute (VMI), where he spoke. After praising Marshall, who is widely credited with being instrumental in rebuilding Europe after World War II, Romney went directly to a discussion of the killing of four Americans in Libya in September, as if the present moment and the aftermath of the Second World War were equivalent times of crisis.

“Last month our nation was attacked again,” Romney said, referring to the Sept. 11 attack on the Benghazi consulate. “Americans are asking how this happened, how the threats we face have grown so much worse, and what this calls on America to do. These are the right questions. ”

Romney made no effort to answer these “right” questions, not even trying to explain how any current threat was “so much worse” than the threat of nuclear annihilation at the peak of the Cold War.

Romney’s argument is based in the implied analogy that suggests Field Marshall Erwin Rommel and the Nazi Afrika Korps in Libya and Tunisia circa 1941-42 is somehow equaled in potency by the threat of a nameless Libyan terrorist cell whose compound was burned by unarmed Libyan civilians.

But that threat inflation was a necessary context for Romney’s argument that President Obama’s policies in the Middle East were inadequate. Contrasting himself with Obama’s somewhat nuanced relations with both Israel and Iran, Romney indicated he’d take marching orders from Israel even if it meant marching on Iran.

“Iran today has never been closer to a nuclear weapons capability. It has never posed a greater danger to our friends, our allies, and to us,” Romney told his military audience, without clarifying that Iran hasn’t been a great threat to anyone for over 2,000 years, since the Persian Empire. Nor did Romney acknowledge that prediction of the imminent threat of an Iranian nuclear weapon has been made and proved wrong again and again for more than two decades.

Without citing any detail, Romney makes clear his intent to allow no “daylight” between the United States and Israel. Two pages later he promises that I will recommit America to the goal of a democratic, prosperous Palestinian state living side by side in peace and security with the Jewish state of Israel.

No New Ideas For Israel & Palestine

Romney made no effort to say how he would overcome Israeli resistance to a Palestinian state.  Nor did he try to explain his new position as compared to his comments at a secretly taped fundraiser, where he said he wouldn’t do much more about Israel/Palestine than hope for the best. That gave a certain irony to one of his more quotable lines referring to Obama’s approach to the Middle East: “Hope is not a strategy.”

Romney did not say whether he would bring back the use of torture, an idea favored by some of his foreign policy advisers. Romney has said he doesn’t consider water boarding to be torture.

As expected, when Romney did venture into specifics, he made several mistakes:

–When he said, “I will roll back President Obama’s deep and arbitrary cuts to our national defense,” he ignored the reality that military spending is currently more than $700 billion a year, an all-time high.

–When he said, “ The President has not signed one new free trade agreement in the past four years,” he ignored the fact that Obama has signed three, with Colombia, Panama, and South Korea.

Some have taken comfort in Romney’s softer line toward Russia, which he previously called the most serious international threat facing the U.S. And while he didn’t use the word “war,” Juan Cole of Informed Comment analyzed the speech to indicate Romney was planning on starting, expanding, or re-starting five “wars” in Iraq, Syria, Iran, Afghanistan, and “small wars” in places like Yemen, Somalia, or Libya.

Since the United States says it has Special Operations Forces in 75 countries conducting daily missions as part of the “war” on terror, it’s possible the Romney plans represent a contraction of our current “wars” in almost half the countries in the world. That helps explain why our military expenditures are almost equal to the combined total of the rest of the world.

Madeleine Albright, who was secretary of state under President Bill Clinton, said that: “I watched the speech with great interest trying to figure out what Gov. Romney’s policies really are. I think I came out more confused. I just find him very shallow in the ideas he has. Shallow.”

At a campaign event the day after his speech, Romney referred to his meeting one of the Americans killed in Benghazi, about whom Romney said, “he skied a lot, in some of the places I had, and we had a lot of things in common.”

← The Neocons’ Waiting Game
Romney Tests the Limits on Lying →