Exclusive: Mitt Romney told supporters behind closed doors that he’s disadvantaged because he was born to a rich white family, that he’d have a better chance to win if his dad were a Mexican. It’s getting hard to decide if Romney is simply a country-club racist or delusional, writes Robert Parry.

Mitt Romney has taken some heat for comments made at a Republican fundraiser disparaging “47 percent” of the American people as leaches who get government benefits and “believe that they are victims.” But perhaps even more troubling was his claim that he would be better off politically if his father were Mexican.

The comment suggests that the GOP presidential nominee has no idea the challenges faced in the United States by immigrants and people of color, compared to the advantages that he enjoyed being the son of a wealthy white auto executive who also had a successful career in politics, becoming governor of Michigan. 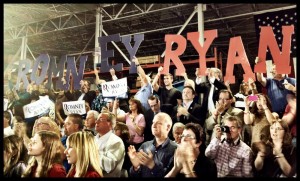 Given Mitt Romney’s limited intellect and his clumsy people skills, the odds are that he never would have made it very far in America if he had not been born into a family of prominence and privilege.

Yet, in Romney’s mind, he’s the victim here, the beleaguered white guy from a rich family; the kid who attended a pricey prep school and Harvard University; the business executive who was set up by wealthy friends with tens of millions of dollars to succeed in private equity. Romney was born on third base with a silver spoon in his mouth and convinced himself that he had not only hit a triple but had taught himself to be a world-class silversmith.

But now he finds himself struggling in the presidential race against an African-American with the middle name Hussein who grew up a semi-orphan — with an absentee father from Kenya and a single mom who later remarried and moved to Indonesia — raised mostly by his aging grandparents in Hawaii, and who required scholarships to get an education.

So, naturally, it is Mitt Romney who deserves our pity. In the recently released video of Romney’s comments at a closed fundraiser last May, Romney is heard lamenting that he would have a better chance to win the White House if his dad were Mexican.

“My dad, as you probably know was the governor of Michigan and was the head of a car company,” Romney said. “But he was born in Mexico, and, uh, had he been born of, uh, Mexican parents, I’d have a better shot at winning this.”

This self-pitying comment the New York Times characterized the remark as “joking” recalls another clunker told by Romney last month poking fun at President Barack Obama for being the target of right-wing “birther” conspiracies challenging the Hawaii state records showing that Obama was born in Hawaii.

Speaking in his native Michigan and standing alongside his wife Ann, Romney said, “Now I love being home in this place where Ann and I were raised, where both of us were born. Ann was born in Henry Ford Hospital. I was born in Harper Hospital. No one’s ever asked to see my birth certificate. They know that this is the place that we were born and raised.”

After the “punch line,” Romney paused to take in the appreciative laughter and applause from his predominantly white audience. U.S. media pundits were quick to reassure the American people that despite the tasteless “joke” referencing the racist lie that Barack Obama was born in Kenya the Republican presidential candidate was surely no racist.

But Romney is rapidly building a record as one of those clueless rich white guys who thinks of himself as a self-made winner  while portraying people with darker skin and less money as pathetic losers and parasites. His vice presidential running mate Paul Ryan is known as the devotee of Ayn Rand but Romney also seems to have internalized her philosophy of selfishness, which divides society into productive supermen and useless moochers.

Now, Romney has taken his country-club racism a step further, suggesting that being a person of color whose parents emigrated from a poor country is actually an advantage that gives you a leg-up on someone like him.

Yet, while wishing to be a Mexican-American for its presumed political advantages, Romney disparaged Mexicans in his book, No Apology, which delves into academic theories about their alleged cultural inferiority. Describing his thoughts as he traveled the world, he wrote:

“I wondered how such vast differences could exist between countries that were literally next door to each other. How could Americans be so rich and Mexicans so poor? How could Israelis have created a highly developed, technology-based economy while their Palestinian neighbors had not yet even begun to move to an industrial economy?”

Romney praised the writings of Harvard professor David Landes, who in Wealth and Poverty of Nations said “culture makes all the difference.”

Then, Romney cited some cultural aspects possessed by such countries that prosper contrasted with those that don’t including a strong work ethic, creativity, entrepreneurial spirit, cooperation, commitment to education, faith in God, devotion to family, patriotism, honor, trust in the law, and respect for life.

Romney reprised some of these thoughts during his gaffe-filled foreign trip in late July. He offended Palestinians and even some Israelis with a similar condescension toward Arabs living in Gaza and the West Bank. Pandering to an audience of Jewish-Americans in Jerusalem, Romney contrasted Israel’s prosperity against the poverty in the Palestinian territories.

Again citing Landes’s book, Romney asserted that “culture makes all the difference. And as I come here and I look out over this city and consider the accomplishments of the people of this nation, I recognize the power of at least culture and a few other things,” an apparent reference to divine intervention on Israel’s behalf.

But Romney’s larger point was that Israel’s relative economic success, versus the Palestinians’ economic struggles, could be traced to Israel’s cultural superiority, not to the long-term Israeli occupation of Palestinian territories that has denied those inhabitants a reasonable chance to build a modern economy.

Romney’s campaign denied that his remark was intended to slight the Palestinians. But there’s no doubt that when you say that one nation thrives because of its superior culture that means that another one fails because of its deficient culture. For the Palestinians, that assessment is particularly offensive since much of their poverty relates directly to the harsh conditions from decades of Israeli occupation, including barriers to outside trade.

But the new disclosures from the video, which was initially leaked to Mother Jones magazine, reveal Romney as not just a person who looks down at Mexicans for their cultural deficiencies but who also thinks that their ethnicity gives them some unfair advantage over him.

In Romney’s delusional world, Mexicans are simultaneously inferior and privileged, while being born a white male into a rich and prominent American family makes you the victim.

← The Mystery of Neocon Influence
Romney’s Cluelessness on Palestine →

43 comments for “The Delusional Mr. Romney”