Mitt Romney’s casual dismissal of Israeli-Palestinian peace as simply something to
“kick … down the field” was perhaps meant to sound tough, even coolly cynical, but actually revealed a stunning naivetÃ© and ignorance, says ex-CIA analyst Paul R. Pillar.

What Mitt Romney said about the Middle East at that $50,000-a-plate fundraiser at the home of a fellow private-equity tycoon is not what is getting the most attention and what Democrats are most energetically spotlighting.

That distinction, of course, goes to Romney’s dismissal of 47 percent of the electorate as freeloading government dependents who have a victim complex and do not take personal responsibility for their own lives. 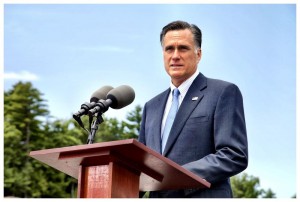 And Romney’s rejection of a negotiated two-state solution for the Israeli-Palestinian conflict, which even his friend Bibi Netanyahu claims he supports, shouldn’t be all that surprising given the indications of Netanyahu’s actual aims and how Romney is outsourcing to him his policies on anything having to do with Israel.

One might even gain comfort by noting that some serious and knowledgeable people who study this conflict have questioned whether a two-state solution is still possible. But then one is jolted back to a state of dismay by noting that Romney makes no mention whatsoever of the reason this question arises, which is the continued Israeli creation of facts on the ground by colonization of occupied territory.

Let us try to get away from the politics of the campaign and away from simply piling on and use this as a teachable moment about some important matters involving foreign policy and national security. The ignorance Romney displayed unfortunately seems to be shared by a good number of other people, and the more the results of such ignorance are voiced, the more that still more Americans are misinformed.

There is, first of all, an item that on the surface sounds relevant to that all-preoccupying nuclear program in Iran (Romney twice equated Iran with “crazy,” which has no basis in fact, but that is yet another item.) The candidate presented a scenario about the “crazed fanatics” in Iran giving “a little fissile material” to Hezbollah, which in turn brings it to Chicago and makes a threat about setting off a “dirty bomb.”

Setting aside everything about unexplained intentions and motivations for any of this, there is the misconception that fissile material is needed for dirty bombs, known more precisely as radiological dispersal devices. It isn’t, and radioactive isotopes of many other substances would be far better for that task.

The enriched uranium Iran is working on, as well as natural uranium, would be a lousy ingredient for a dirty bomb. Someone who wanted to put a dirty bomb in Chicago would find better sources of material among medical isotopes in Chicago hospitals. But in the miasma of ignorance that is involved, “Iran,” “crazy,” “nuclear” and “threat” all just sort of get blended together haphazardly.

The central untruth that the candidate voiced on the Israeli-Palestinian conflict was that “the Palestinians”, no distinctions whatsoever being made among them, are “not wanting to see peace” and are “committed to the destruction and elimination of Israel.”

Today, which is not to be confused with the 1940s, that statement does not come anywhere close to being true for any Palestinians beyond a small radical fringe. It is not true for ordinary Palestinians, as repeatedly gauged in public-opinion polls. It is not true of the Fatah-dominated Palestinian Authority. It is not even true for Hamas, which has indicated its willingness to live alongside Israel.

Any Palestinian with half a brain knows that “elimination of Israel” would be impossible even if that were wanted. And the incentives are all in the direction of wanting a peace agreement instead.

Romney also echoed a line, from Israelis resistant to yielding any of the West Bank, that somehow giving up this territory would entail a security threat to Israel. Romney’s version had Iran bringing “missiles and armament” into the West Bank, as if the Kingdom of Jordan didn’t exist and there were some kind of Israeli-Iranian battle front that suddenly would advance to Tulkarm.

In fact, any careful analysis shows that the idea of such a threat is a myth. It does not accord with geography, with Israeli military superiority or with any incentives on the part of a Palestinian state in the West Bank, the leaders of which would know that any hint of moving in the direction of something like an Iranian arms depot would, given the understandable Israeli reaction, spell the end of their long-sought state.

Israel faces more of a security threat from sitting on top of a dissatisfied population of Palestinians than from living beside a Palestinian state.

There is, finally, the candidate’s apparent inability to see any downside, as a matter of either injustice or instability, of having this problem fester indefinitely. Because his comments were unrehearsed responses to a question, he perhaps can be forgiven for having a plan that consists of “we sort of live with it, and we kick the ball down the field and hope that ultimately, somehow, something will happen and resolve it.”

But the problem isn’t just lack of a plan. It is a profound misunderstanding of what Palestinians are subjected to under the thumb of Israel. We saw some of this in Romney’s trip this summer to Israel, in which he attributed inferior Palestinian economic performance entirely to an inferior culture.

We are reminded of how incorrect that is by the judgment this week by the International Monetary Fund’s mission chief for the West Bank and Gaza that for economic recovery and development in the territories it is essential to ease the restrictions that Israel places on Palestinian trade and movement.

Confirmation of the ignorance regarding this last issue came in Romney’s comment in Boca Raton that we can live with an unresolved Israeli-Palestinian conflict just as “we live with that in China and Taiwan.” In case he didn’t notice: China doesn’t occupy Taiwan. The Taiwanese have political liberties, and prosperity.

The issue in the Palestinian territories is not whether the militarily dominant power in the region will invade and occupy a neighbor; it is instead whether the occupation that continues from such an invasion 45 years ago will ever end.

One thing was at least internally consistent in the candidate’s remarks: he may as well write off any intention of trying to bring about a negotiated settlement of this conflict, because he has destroyed whatever standing he may have otherwise had to be an honest broker.

4 comments for “Romney’s Cluelessness on Palestine”