Two recent rulings, one in Israel blaming American Rachel Corrie for her own death while obstructing the demolition of Palestinian homes and another in America absolving torturers in the murder of detainees, suggest that national security trumps justice and international law is easily brushed aside, writes Lawrence Davidson.

On March 16, 2003, the last day of her life, 23-year-old Rachel Corrie was in the Gaza town of Rafah standing in front of the Palestinian family home of Dr. Samir Nasrallah, who was a local pharmacist. Ms. Corrie had been staying with his family while serving as part of an International Solidarity Movement (ISM) cadre seeking to disrupt the Israeli army’s (IDF) on-going demolition of Palestinian homes. (They are not just houses.)

Between 2000 and 2004, the Israelis had destroyed enough homes in the Rafah area to leave some 1,700 people homeless. The Israeli army claimed they did this because these homes were used as “terrorist hiding places.” The result, they claimed, was frequent gunfire at Israeli settlements and soldiers. Yet for the time that Ms Corrie stayed with the Nasrallahs, everyone in the home had slept on the floor and away from the windows to avoid a constant barrage of gunfire from Israeli snipers. 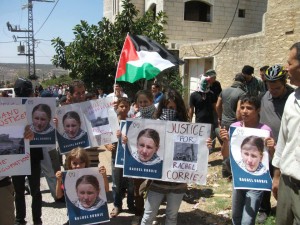 On the day that Ms Corrie died, she interposed herself between the Nasrallah home and a very large “D9R” armored Caterpillar bulldozer driven by an Israeli soldier. This was one of those infamous, made-in-the-USA machines sold to Israel by the Caterpillar Inc. even though the CEO, Board of Directors and sales staff know that their product is used to destroy homes in ways that violate international law.

At the time the bulldozer in question stood 20 to 30 meters from Corrie, who was wearing a “high visibility” fluorescent orange jacket and was speaking through a megaphone calling for the tractor driver to stop or turn away. The tractor moved toward her and the home slowly in an operation the IDF later described as the “clearing of vegetation and rubble” so as to remove “explosive devices.”

As it approached, the driver lowered the tractor blade and began accumulating a mound of dirt and debris as the machine went along. When the bulldozer was close to the outer wall of the Nasrallah home, Corrie climbed on top of the accumulating debris. At that point she was so positioned that she could look directly into the tractor cab, and the driver could look directly out at her, from no more than three or four meters.

The machine kept coming. In the next few seconds, she lost her balance, fell backwards, and was run over twice by the tractor blade. The bulldozer driver later testified that he never saw Corrie until he noticed “people pulling the body out from under the earth.”

There was, of course, an internal military investigation of the incident, an investigation that then Israeli Prime Minister Ariel Sharon promised then President George W. Bush would be “thorough, credible and transparent.” Senior U.S. officials, including the U.S. Ambassador to Israel, Daniel Shapiro, later observed that the military investigation was none of these things.

The military exonerated both the driver of the tractor and his commander, saying that neither had seen Corrie and adding that they weren’t even trying to destroy the Nasrallah home that day.

The judgment followed a long-standing practice of the Israeli military, reconstructing scenarios after the fact in order to rationalize just about any action soldiers take against the Palestinians, no matter how criminal. In the Rafah area during the years that Corrie and other ISM volunteers worked there, the Israeli military was in the habit of targeting Palestinian children, killing some 400 of them, one-fourth of whom were under the age of 12.

In almost all cases, there was no penalty for committing these murders. The practice of granting immunity has also been followed by Israeli police and courts with reference to crimes committed by Israeli civilians, especially settlers, against Palestinians. To date, “91% of investigations of such criminal acts committed by Israelis against Palestinians and their property are closed without indictments being served,” according to the Israeli human rights organization Yesh Din.

In 2005, frustrated by the apparent whitewash of their daughter’s murder, Corrie’s parents filed a civil suit in an Israeli court against the country’s Ministry of Defense. They hoped that the trial would provide the “credible and transparent” accounting that had so far been denied. Subsequently, 15 court sessions were held in the city of Haifa and just 23 witnesses testified. Yet the whole thing dragged on for seven years until last Aug. 28 when the presiding judge, Oded Gershon, finally issued his ruling.

“I reject the suit,” Gershon stated in his 62-page decision, claiming that Corrie and the other ISM activists had purposely chosen to enter a “daily combat region” where they acted “to protect terrorists.” The judge accepted the army’s claim that the bulldozer driver had not seen Corrie. In any case, according to the judge, she was acting irrationally.

“Corrie could have simply gotten out of the way of the bulldozer as any reasonable person would have done,” but she did not, and so she was ultimately responsible for her own death. According to the Corrie family lawyer, Hussein Abu Hussein, Judge Gershon’s judgment was “so close to the state’s attorney’s version of events that it could have been written by him.”

The judge’s mind-set is perhaps the most telling part of the judgment. In Gershon’s world, the Israeli army was not seeking to engage in a siege that was turning Gaza into the world’s largest outdoor prison while illegal Israeli settlements expanded. And, because that was not what was going on, any response by the people of Gaza could not be seen as legitimate acts of resistance or self-defense.

No, the people of Gaza were at best supporters of terrorists or at worst terrorists themselves. That was the paradigm into which both the judge and all the Israeli army witnesses were locked. These witnesses spoke from behind a curtain, using aliases. This was done “for security reasons.”

And, they all said basically the same thing: we did not see Rachel Corrie and even if we had we would not have seen a civilian. Why? Because Israel is at war with the Palestinians and, as one testifying IDF officer (aka Yossi) put it, “during a war there are no civilians.” There are only terrorists and their allies (Corrie) and Israel does not prosecute its soldiers for waging “war” against them.

The resulting a priori immunity is not unique to Israel. Just days after the Corrie decision was announced, another decision, this time by the U.S. Justice Department, was made public. The Department ended its investigation into deaths occurring during CIA interrogations conducted using torture. No charges were brought against the torturers in these cases due to insufficient “admissible evidence.” That is, the evidence which the government itself would declassify so as to make it admissible was not sufficient to “sustain a conviction.”

The American Civil Liberties Union called the decision “nothing short of a scandal. Continuing impunity threatens to undermine the universally recognized prohibition on torture and other abusive treatment.”

If you come across an individual who condemns an entire category of people and is also willing to violently act on the basis of that belief, you might call him or her a pathological racist, or a pathological xenophobe, or a pathological paranoid chauvinist. But what happens when those same sick sentiments get institutionalized in powerful bureaucracies?

When, say, all Arabs (be they Muslim or Christian) are suspect and subject to government surveillance, segregation, collective punishment and worse. What then do you call this? National security? All too often that is exactly what we call it. The “we” here includes almost all politicians, media newscasters, security personnel, talking head “experts,” and the like.

What it comes down to is that, in the name of “national security,” we can justify almost anything, including killing kids in Gaza and torturing people to death in some dungeon, the whereabouts of which is classified, as well as running over a 23-year-old peace activist with a massive bulldozer.

That is certainly what the Corrie episode has shown to be the case in Israel. And it does not matter what is driving this obsessive stereotyping of the Palestinians as collective enemies by both individuals and entire government departments.

The Israelis and their Zionist supporters can evoke the Holocaust (and, for that matter, the Americans can talk about 9/11) until the end of time. The actions stemming from such ultimately racist perspectives are still thoroughly dehumanizing and criminal. Such is perpetual “war.”