The ploy of Israeli Prime Minister Benjamin Netanyahu to use the November elections to push President Obama into supporting an attack on Iran’s nuclear sites appears to be failing in the face of Obama’s firm “no,” say Jim Lobe and Gareth Porter at Inter Press Service.

By Jim Lobe and Gareth Porter

President Barack Obama’s explicit warning that he will not accept a unilateral Israeli attack against Iran may force Israeli Prime Minister Benjamin Netanyahu to step back from his ostensible threat of war.

Netanyahu had hoped that the Obama administration could be put under domestic political pressure during the election campaign to shift its policy on Iran to the much more confrontational stance that Netanyahu and Defense Minister Ehud Barak have been demanding. 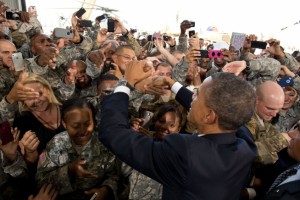 But that political pressure has not materialized, and Obama has gone further than ever before in warning Netanyahu not to expect U.S. backing in any war with Iran. Chairman of the Joint Chiefs of Staff Gen. Martin Dempsey told reporters in Great Britain on Aug. 30 that an Israeli strike would be ineffective, and then said, “I don’t want to be complicit if they (the Israelis) choose to do it.”

It was the first time that a senior U.S. official had made such an explicit public statement indicating the administration’s unwillingness to be a party to a war provoked by a unilateral Israeli attack.

Dempsey had conveyed such a warning during meetings with Israeli leaders last January, as IPS reported on Feb. 1, but a series of moves by the administration over the next several months, including the adoption of Israeli demands during two rounds of negotiations with Iran on the nuclear issue in May and June, appeared to represent a retreat from that private warning.

Dempsey’s warning was followed by an as-yet-unconfirmed report by Time magazine that the Pentagon has decided to sharply cut back on its participation in the largest-ever joint military exercise with Israel designed to test the two countries’ missile-defense systems in late October.

Originally scheduled for last spring, the exercise was delayed in January following an earlier round of Israeli saber-rattling and the apparent Israeli assassination of an Iranian scientist, which had further increased tensions between Netanyahu and President Obama.

Former Israeli national security adviser Giora Eiland suggested in an interview with Reuters on Tuesday that the Dempsey statement had changed the political and policy calculus in Jerusalem. “Israeli leaders cannot do anything in the face of a very explicit ‘no’ from the U.S. president,” Eiland said. “So they are exploring what space is left to operate.”

Eiland explained that Netanyahu had previously maintained that the U.S. “might not like (an Israeli attack) but they will accept it the day after. However, such a public, bold statement meant the situation had to be reassessed.”

Netanyahu and Barak have never explicitly threatened to attack Iran but have instead used news leaks and other means to create the impression that they are seriously considering a unilateral air strike.

The Netanyahu campaign, aimed at leveraging a shift in U.S. policy toward confrontation with Iran, appeared to climax during the first two weeks of August amid a torrent of stories in the Israeli press suggesting that Netanyahu and Barak were getting closer to a decision on war.

An unnamed senior official almost certainly Barak indicated in an interview that the Israeli leader would reconsider the unilateral military option if Obama were to adopt the Israeli red line in effect an ultimatum to Iran to end all enrichment or face war.

As Eiland suggests, however, Netanyahu may no longer feel that he is in a position to make such a demand when he meets Obama later this month. Not only has Obama drawn a clear line against unilateral Israeli action, but the Republican Party and its presidential candidate Mitt Romney have failed to signal that Obama’s rejection of Netanyahu’s belligerence on Iran will be a central issue in the presidential campaign.

Although the party platform said the threshold for military action should be Iran’s acquisition of a nuclear weapons “capability” rather than the construction of an actual weapon, Romney did not embrace the threat to go to war unless Iran agrees to shut down its nuclear program, as Netanyahu would have hoped.

That omission appeared to reflect the growing influence in his campaign of the “realist” faction of the Republican Party which opposed the radical post-9/11 trajectory of George W. Bush’s first presidential term in office and re-asserted itself in the second term.

The party’s marquee speaker on foreign policy was not a neoconservative but former Secretary of State Condoleezza Rice, whom the neoconservatives viewed with disdain, not least because of her effort to begin diplomatic engagement with Iran. Rice mentioned Iran only in connection with its crackdown against dissidents during her prime-time speech.

The fact that the billionaire casino mogul Sheldon Adelson, a strong supporter of Netanyahu and the Israeli far right, has pledged up to $100 million to support the Republican campaign seemed to assure them of the upper hand on Israel and Iran.

But neoconservatives may have lost influence to the realists as a result of Romney’s ill-fated trip in July to Great Britain, Israel and Poland all neoconservative favorites as well as recent polling showing ever-growing war-weariness, if not isolationism, among both Republicans and the all-important independents in the electorate.

On the convention’s eve, Lee Smith, a neoconservative scribe based at the Standard, published an article in Tablet Magazine entitled “Why Romney Won’t Strike Iran.”

One of Romney’s senior advisers, former CIA chief Gen. Michael Hayden, has even partially echoed Dempsey, telling the Israeli newspaper Haaretz on Thursday that an Israeli raid against Iran’s nuclear facilities would likely be counter-productive.

Both Hayden’s and Dempsey’s remarks about the futility or counter-productivity of an Israeli attack on Iran echoed those of a broad range of Israel’s national-security elite, including President Shimon Peres and the former chiefs of Israel’s intelligence agencies and armed forces, who, provoked by Netanyahu’s and Barak’s war talk, have come out more strongly than ever against the idea.

In addition to publicly casting doubt on whether an attack would be effective, many of the national-security critics have warned that a unilateral strike could seriously damage relations with the U.S. That argument, which resonates strongly in Israeli politics, was given much greater weight by Dempsey’s warning last week.

Further eroding Israeli tolerance of Netanyahu’s talk of war was a blog post on the Atlantic Magazine’s website by Jeffrey Goldberg, an influential advocate of Israeli interests who has helped propagate the notion that Israel would indeed act unilaterally in the past. As the Netanyahu campaign reached its climax last month, Goldberg offered “7 Reasons Why Israel Should Not Attack Iran’s Nuclear facilities”.

Goldberg worried that an Israeli “strike could be a disaster for the U.S.-Israel relationship,” especially if Iran retaliated against U.S. targets. “Americans are tired of the Middle East, and I’m not sure how they would feel if they believed that Israeli action brought harm to Americans,” he wrote.

Jim Lobe’s blog on U.S. foreign policy can be read at http://www.lobelog.com. Gareth Porter, an investigative historian and journalist specialising in U.S. national security policy, received the UK-based Gellhorn Prize for journalism for 2011 for articles on the U.S. war in Afghanistan. [This article appeared originally at Inter Press Service.]