The latest fury over Iranian President Mahmoud Ahmadinejad’s condemnation of Israel’s Zionist government as “an insult to all humanity” ignores the growing body of evidence that today’s Israel is evolving into an Apartheid state similar to the old South Africa, Nima Shirazi writes.

As tends to happen whenever Mahmoud Ahmadinejad delivers a speech, especially one in commemoration of Al-Quds Day that explicitly rejects the ideology of Zionism and condemns the Israeli government for its inherently discriminatory, exclusivist and ethnocentric policies and actions, all hell broke lose after the Iranian President addressed a large crowd at Tehran University last Friday. 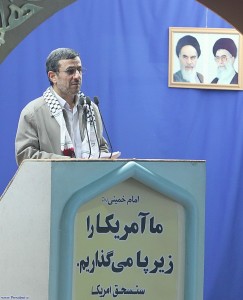 Naturally, Ahmadinejad’s words also sparked the usual shock and horror from the usual people, the same people who still insist that (1) Ahmadinejad called for Israel to be “wiped off the map” and (2) believe that such a comment constituted a direct threat of military action against the superpower-backed, nuclear-armed state of Israel.

Without delving into the persistent myths and deliberate falsehoods surrounding that particular talking point (one that has been sufficiently debunked countless times) or seeking to justify anything said by Ahmadinejad, a few things should be noted:

First: While Associated Press described Ahmadinejad’s comment as “one of his sharpest attacks yet against the Jewish state,” which seemed to indicate that this is the first time such language has been used, they failed to point out that Ahmadinejad has used this exact same phrase before.

After Ahmadinejad delivered a speech at a “National and Islamic Solidarity for the Future of Palestine” conference in February 2010, Ha’aretz reported he had said that “the existence of ‘the Zionist regime’ is an insult to humanity,” according to Iranian news agency IRNA. Later that year, he said the very same thing.

Second (and more important): The “insult to humanity” phrase was not coined by the Iranian President to describe a political power structure defined by demographic engineering, colonialism, racism, and violence. For example, a Dec. 11, 1979, editorial in California’s Lodi News-Sentinel stated clearly, “Apartheid is an insult to humanity” and “must be ended.”

But the phrase has far deeper roots – roots with which the UN Secretary-General himself should be well acquainted. A joint declaration by 20 Asian and African countries issued to the General Conference of the International Atomic Energy Agency (IAEA) on Oct. 1, 1963, called upon the agency to reject the membership of South Africa due to its racist and discriminatory regime of Apartheid.

It noted “with grave concern that the South African Government continues stubbornly to disregard all United Nations and Security Council resolutions and to maintain its apartheid policies in defiance of the United Nations General Assembly, of the Security, and consequently of the IAEA Statute.” The declaration stated:

1. We condemn categorically the apartheid policies of the Government of South Africa, based on racial superiority, as immoral and inhuman;

2. We deprecate most strongly the South African Government’s irresponsible flouting of world opinion by its persistent refusal to put an end to its racial policies;

3. The apartheid policies of the Government of South Africa are a flagrant violation of the principles of the United Nations Charter, as well as being an insult to humanity.

The very first International Conference on Human Rights, held by the UN in (get this) Tehran from April 22 to May 13, 1968, “condemned the brutal and inhuman practice of apartheid,” “deplore[d] the Government of South Africa’s continuous insult to humanity,” and “declare[d] that the policy of apartheid or other similar evils are a crime against humanity.”

On Feb. 15, 1995, the UN High Commissioner for Human Rights adopted a resolution praising the end of “the era of apartheid in South Africa” which also reaffirmed that “apartheid and apartheid-like practices are an insult to humanity…”

The UN General Assembly has repeatedly reaffirmed “that the conclusion of an internal convention on the suppression and punishment of the crime of apartheid would be an important contribution to the struggle against apartheid, racism, economic exploitation, colonial domination and foreign occupation” and, more specifically, the UN has affirmed time and again that “the inalienable rights of all peoples, and in particular … the Palestinian people, to freedom, equality and self-determination, and the legitimacy of their struggles to restore those rights.”

Third: No one can accuse Mahmoud Ahmadinejad of having any affinity whatsoever for Zionism or the government of Israel. Clearly he believes that Israel practices its own form of Apartheid against the Palestinian people. And he is not alone.

Back in 1961, Hendrik Verwoerd, South Africa’s Prime Minister said, “The Jews took Israel from the Arabs after the Arabs had lived there for a thousand years. Israel, like South Africa, is an apartheid state.”

Vorster lamented that both South Africa and Israel were victims of the enemies of Western civilization. Only a few months later, an official South African Government’s document reinforced this shared predicament: “Israel and South Africa have one thing above all else in common: they are both situated in a predominantly hostile world inhabited by dark peoples.”

Both Nelson Mandela, Archbishop Desmond Tutu, and as well as many other South African anti-Apartheid activists, have consistently called Israel an Apartheid state.

Michael Ben-Yair, Israel’s attorney general from 1993 to 1996, has written that following the Six Day War in June 1967, “We enthusiastically chose to become a colonial society, ignoring international treaties, expropriating lands, transferring settlers from Israel to the occupied territories, engaging in theft and finding justification for all these activities.

That oppressive regime exists to this day. Avraham Burg, Israel’s Knesset Speaker from 1999 to 2003 and former chairman of the Jewish Agency for Israel, has long determined that “Israel must shed its illusions and choose between racist oppression and democracy,” insisting the only way to maintain total Jewish control over all of historic Palestine would be to “abandon democracy” and “institute an efficient system of racial separation here, with prison camps and detention villages.” He has also called Israel “the last colonial occupier in the Western world.”

Yossi Paritzky, former Knesset and Cabinet minister, writing about the systematic institutionalization and legalization of racial and religious discrimination in Israel, stated that Israel does not act like a democracy in which “all citizens regardless of race, religious, gender or origin are entitled to equality.” Rather, by implementing more and more discriminatory laws that treat Palestinians as second-class citizens, “Israel decided to be like apartheidâ€‘era South Africa, and some will say even worse countries that no longer exist.”

Shulamit Aloni, another former Knesset and Cabinet member, has written that “the state of Israel practices its own, quite violent, form of Apartheid with the native Palestinian population.”

In 2008, the Association of Civil Rights in Israel released its annual human rights report which found that the dynamic between settlers, soldiers and native Palestinians in the occupied West Bank was “reminiscent, in many and increasing ways, of the apartheid regime in South Africa.”

Ehud Olmert, when he was Prime Minister, told a Knesset committee meeting, “For sixty years there has been discrimination against Arabs in Israel. This discrimination is deepâ€‘seated and intolerable” and repeatedly warned that if “we face a South African-style struggle for equal voting rights (also for the Palestinians in the territories), then, as soon as that happens, the State of Israel is finished.”

Ehud Barak has admitted that “[a]s long as in this territory west of the Jordan river there is only one political entity called Israel it is going to be either non-Jewish, or non-democratic. If this bloc of millions of ­Palestinians cannot vote, that will be an apartheid state.”

Shlomo Gazit, former member of Palmach, an elite unit of the Haganah, wrote in Ha’aretz that “in the present situation, unfortunately, there is no equal treatment for Jews and Arabs when it comes to law enforcement. The legal system that enforces the law in a discriminatory way on the basis of national identity, is actually maintaining an apartheid regime.”

Last summer, Knesset minister Ahmed Tibi told the Jerusalem Post that “keeping the status quo will deepen apartheid in Israel as it did in South Africa,” while Gabriela Shalev, former Israeli ambassador to the UN, told The Los Angeles Times last year that, in terms of public opinion of Israel, “I have the feeling that we are seen more like South Africa once was.”

Council on Foreign Relations member Stephen Roberts, after returning from a trip to Israel and the West Bank, wrote in The Nation that “Israel has created a system of apartheid on steroids, a horrifying prison with concrete walls as high as twenty-six feet, topped with body-ravaging coils of razor wire.”

In April 2012, Benjamin Netanyahu’s own nephew, Jonathan Ben Artzi, wrote that Israel’s “policies of segregation and discrimination that ravaged (and still ravage) my country and the occupied Palestinian territories” undoubtedly fit the definition of Apartheid.

Linguist, cultural anthropologist, and Hebrew University professor David Shulman wrote in May 2012 in The New York Review of Books that there already exists “a single state between the Jordan River and the sea” controlled by Israel and which fits the definition of an “ethnocracy.”  He continues:

“Those who recoil at the term ‘apartheid’ are invited to offer a better one; but note that one of the main architects of this system, Ariel Sharon, himself reportedly adopted South African terminology, referring to the noncontiguous Palestinian enclaves he envisaged for the West Bank as ‘Bantustans.’”

These Palestinian Bantustans now exist, and no one should pretend that they’re anything remotely like a “solution” to Israel’s Palestinian problem. Someday, as happened in South Africa, this system will inevitably break down.

Whether those who get hysterical over Ahmadinejad’s rhetoric agree with the above assessments – many of which were made by prominent Israeli and Jewish politicians, officials and academics – is irrelevant.  It’s clear that Ahmadinejad himself would agree.

Consequently, his reference to Israel (which he sees as an Apartheid state) as an “insult to humanity” (which repeats the same verbiage used repeatedly by the United Nations itself) appears to be far less inflammatory then the outrage that followed would suggest.

Nima Shirazi is a political commentator from New York City. His Web site is www.wideasleepinamerica.com, where this story first appeared. Follow him on Twitter @WideAsleepNima

19 comments for “Israel’s Drift into Apartheid”