“Green on Blue” attacks in which Afghan soldiers kill their presumed allies, i.e. U.S. and NATO soldiers, have become a growing problem as the Afghan War drags on, closing in on its eleventh year, a warning sign for all long-term foreign occupations, says ex-CIA analyst Paul R. Pillar.

Surely one of the most disconcerting trends in the now nearly 11-year-old U.S. military expedition in Afghanistan has been the increase in attacks on NATO and especially American military personnel by supposed allies among the Afghan government forces. 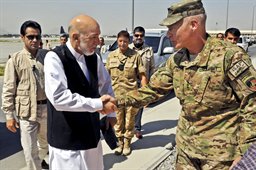 The phenomenon has become such a concern for U.S. commanders that, in an approach that could be called Curtis Sliwa with firepower, they have instituted a “Guardian Angel” program in which one or two American soldiers have the job of keeping an eye on their Afghan allies in every joint mission or meeting, with instructions to shoot first if another such attack starts to unfold.

Post-attack investigations have determined that only a small proportion of the incidents have involved infiltration by the Taliban of government forces or installations. The large majority of the attacks have been the work of individuals driven by whatever combination of emotions and beliefs would bring them to commit such an act.

A U.S. officer tried to make sense of the attacks by observing, “There are simply more opportunities now because we are partnering so heavily.” But that can hardly explain all or even most of the upsurge in the killings.

Secretary of Defense Leon Panetta telephoned President Hamid Karzai to discuss the problem, calling for more intensive counterintelligence work and more thorough vetting of recruits into the Afghan army. Better vetting may identify some would-be G.I.-killers, but probably not most of them. It is doubtful that many of the perpetrators had previous patterns of behavior that would enable them to be flagged. The lethal actions of many of them were probably at least as much impulsive as planned.

Being the lead military force in a long-running conflict means one gets blamed for much of the misery associated with the conflict. What may have initially been a welcome gets worn out over time, and 11 years is a long time.

The costs of such sentiments manifest themselves not only as lethal attacks among ostensible allies on military bases, and such sentiments are not unique to the war in Afghanistan. Afghanistan may demonstrate how easily this kind of ill will, among those the United States is supposedly trying to help, can arise against U.S. military operations, given that Afghanistan was once an island of mostly positive feelings toward the United States in a sea of negative feelings throughout most of the Muslim world.

The problem we are seeing with the green-on-blue attacks is a symptom of a deeper problem that is not likely to improve as the expedition in Afghanistan continues. It also flags a dimension that should be taken into account whenever the application of U.S. military force elsewhere is being considered.

6 comments for “Warning in ‘Green on Blue’ Attacks”